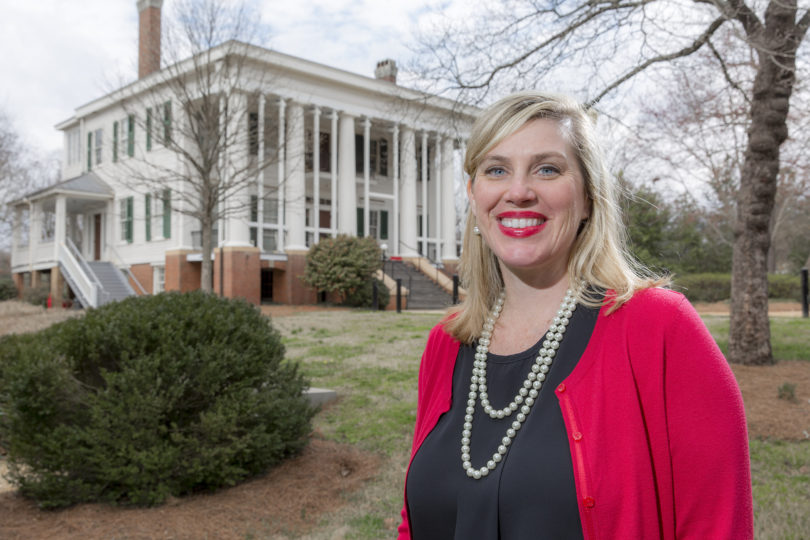 Meredith Gurley Johnson’s entire adult life has been spent studying at or working for UGA—and oftentimes both.

Johnson, executive director of the UGA Alumni Association, graduated from the university’s College of Family and Consumer Sciences in 2000. She’s also working on a master’s degree in adult education in the College of Education.

As an undergraduate student, Johnson wanted the kind of career path that would let her “make a difference.” While still studying for her bachelor’s degree, she took a full-time job in the central development office where she learned about the connections between students, alumni giving and the university’s success. That’s when Johnson found her life’s work in higher education advancement.

Now Johnson is helping foster a new era for alumni giving through her leadership at the Office of Alumni Relations. Looking ahead, Johnson plans to set measurable goals for alumni engagement and help the university better tell the story of how giving makes UGA stronger for generations to come.

UGA President Jere W. Morehead and Kelly Kerner, vice president for development and alumni relations, have stressed the importance of increasing alumni participation in giving to the university.

Kerner, who recently implemented a reorganization in the division, said the Office of Alumni Relations’ ability to build connections is key to the success of the university’s comprehensive campaign goal to raise no less than $1 billion.

“If we do a good job engaging our alumni, they are more likely to be open to the idea of giving,” Kerner said. “I see alumni relations as the connective tissue for the group.”

Johnson said the key to engaging alumni and encouraging them to give is to translate the passion for UGA that moves alumni to wear red and black on game day and hang power-G flags on their house into giving on a personal level.

That participation starts with building a narrative directed at both current students and alumni, she said.

“We need to tell the story that alumni engagement with the university makes a difference,” Johnson said. “Just by making gifts every year—they don’t have to be large gifts—that participation builds over time and allows the university so much more freedom in recruiting and retaining top faculty and in making the student experience even more amazing.”

This strategy was showcased in the 2015 Dawg Trot 5K for Scholarships, a charitable race across campus held March 21 by the UGA Alumni Association. At 10 points in the race, organizers showcased posters that told the story of how the money raised for scholarships helps students. One poster read, “Because of giving, 39.3 percent of full-time undergraduates are able to receive need-based financial aid.” Others featured messages from current scholarship recipients such as one from mechanical engineering major Derrik Chamlee, from LaFayette, which read, “Our communities are improved because of you and lives are touched because of your contributions, thank you so very much!”

Johnson said it’s also important to tell the story of alumni giving to current students, she said. The expectation is that if the story sticks with students, they are more likely to be lifetime supporters of the university after they graduate.

With the Division of Development and Alumni Relations’ reorganization taking effect in December along with Johnson’s appointment as executive director, the Office of Alumni Relations now is working toward setting measurable goals for alumni engagement and communication.

Part of this starts by working with the board of directors of the UGA Alumni Association to align goals around engagement and participation from alumni, Johnson said.

The office also is moving to work more closely with other alumni relations and communications units across campus, an effort Johnson called “wrapping our arms around campus.”

“We’re all in this together, and we can be communicating and sharing strategically,” Johnson said.

Faculty and staff can help the effort, Johnson said, by sharing their stories with the alumni relations office.

“This a big campus. There are a lot of fascinating things taking place,” Johnson said. “I want (faculty and staff) to know alumni relations is here to advocate for them.”

The more the Office of Alumni Relations knows about what faculty and staff are up to, the better Johnson’s staff can weave stories that speak to alumni.

So the work of faculty and staff is crucial to alumni relations’ goals.

“Really, we’re here to brag on them,” Johnson said. “And I want them to know that.”