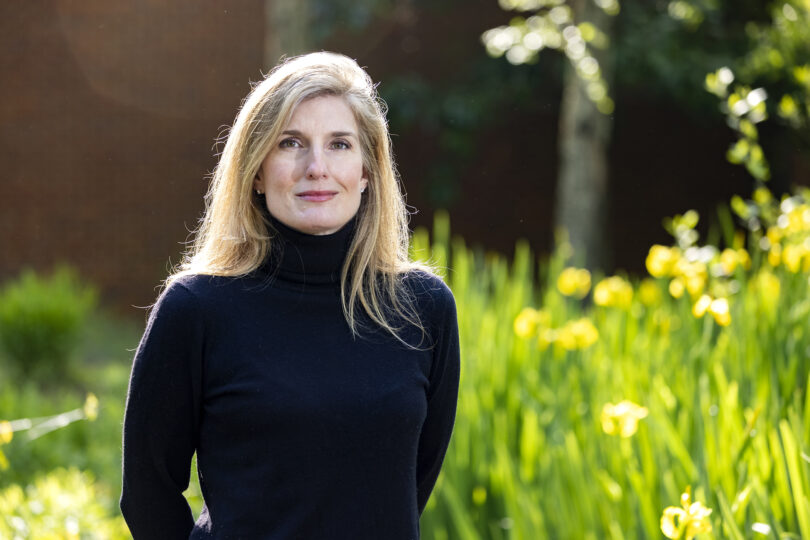 Allison Walters is the the development and alumni relations coordinator in the Odum School of Ecology. (Photo by Dorothy Kozlowski/UGA)

As the development and alumni relations coordinator in the Odum School of Ecology, Walters is able to grow the network of Odum alumni and create a collaborative environment within the school.

“It’s a lot more than fundraising and alumni relations. It’s supporting the faculty, the staff and the students in various shapes and forms,” said Walters.

In her day-to-day work, Walters writes donor thank you letters, makes phone calls, works on solicitations and strategies for fundraising and engagement with alumni donors and friends of ecology, and directly supports the dean and the school’s initiatives. Walters also works on long-term development projects like the creation of an Alumni Working Group and the Ecology Undergraduate Student Support Fund.

“A lot of the priorities of the dean are in the area of student support for our undergraduates and graduates,” said Walters. “[We are] also [establishing] professorships and endowed professorships so we retain our faculty and keep that high level of intellect, research, teaching, public service and outreach mission at the core.

“We are working actively right now towards student scholarships and awards. We raised over $14,000 for our students in the month of November with our Giving Tuesday. At least 12 undergraduates from our fall and spring fundraising efforts will receive support carried into the coming academic year for experiential and service learning; that’s more than we’ve ever had before,” she said.

Odum’s mission is a strong selling point when Walters speaks to potential donors, many of whom have been able to experience the initiatives and action of Odum firsthand.

“You look for alignment when you’re talking to someone. If someone was a graduate in the school in the Conservation Ecology and Sustable Development program, then maybe they have an interest in some conservation or sustainability initiatives that we have in the school. It’s like matching up priorities with someone’s interests,” said Walters.

She added that you “give with your heart,” so it’s important to find commonality and make connections with a potential donor so you can find initiatives that resonate with them.

“We’re always trying to grow this network. We’re trying to engage people, have them over to the school and inviting them here to see the magic that happens in the classroom,” said Walters. “Having that alumni involvement and having them relate to what we do on a daily basis is really exciting.”

Unlike some of the larger colleges at UGA, the alumni desk in Odum is just one person, so Walters operates initiatives across the school.

“There is a small group of us that are kind of a one-person show, who do the development, the alumni relations, the annual giving and support the dean,” said Walters. “It’s all just rolled into a hybrid here in schools like ecology.”

Walters got her start in communication and fundraising with Turner Broadcasting as a project manager for environmental corporate branding. Through the Turner Volunteer Day initiative, she enjoyed being involved in something greater than herself and found that the company had a high level of corporate responsibility and a strong role in the city of Atlanta. That mission brought Walters to UGA, where she could combine her experience with her passion for the environment and bring it to the Odum School of Ecology.

“I personally, like many people, need to be out in nature to be restored. It’s important to me to see that our planet is healthy for us and for future generations,” she said.

“It’s a really great place to be. It’s a hidden gem. There are a lot of great minds here, a lot of great students who are passionate,” said Walters. “We have a really good sense of community here at the school. It’s been so nice to have our coffee hour back and Waffle Wednesdays for the students.”

The Odum school hosts weekly networking events for students, faculty and staff where members of the Odum community can come together and discuss their work and visions, or relax a bit and catch up. Walters uses these events to interact with students and keep a finger on the pulse of the school.

“That really is a wonderful thing. Getting to know the students and what that student is doing also helps me to better do my job and to communicate with the potential donor or alumni or anyone who is interested in what’s going on [at Odum],” said Walters.

Walters also hopes to bring collaboration outside of the college, working with Sonia Altizer, interim dean, to communicate with other schools and colleges.

“Dean Altizer and I are meeting with the deans from some of the other schools to talk about Odum’s mission and their mission and see where we could partner with professorships and student support,” she said. “Collaboration is really important and can make a big impact on the university to think broadly.”

Outside of her work at Odum, Walters enjoys photography, having received a B.F.A. in photography from UGA in 1995. She also enjoys sketching and the creative process, spending time outdoors at the State Botanical Garden of Georgia, going to the local Athens farmers markets, the restaurant home.made and spending time with her dog, Jeets, and her cat, Margo.