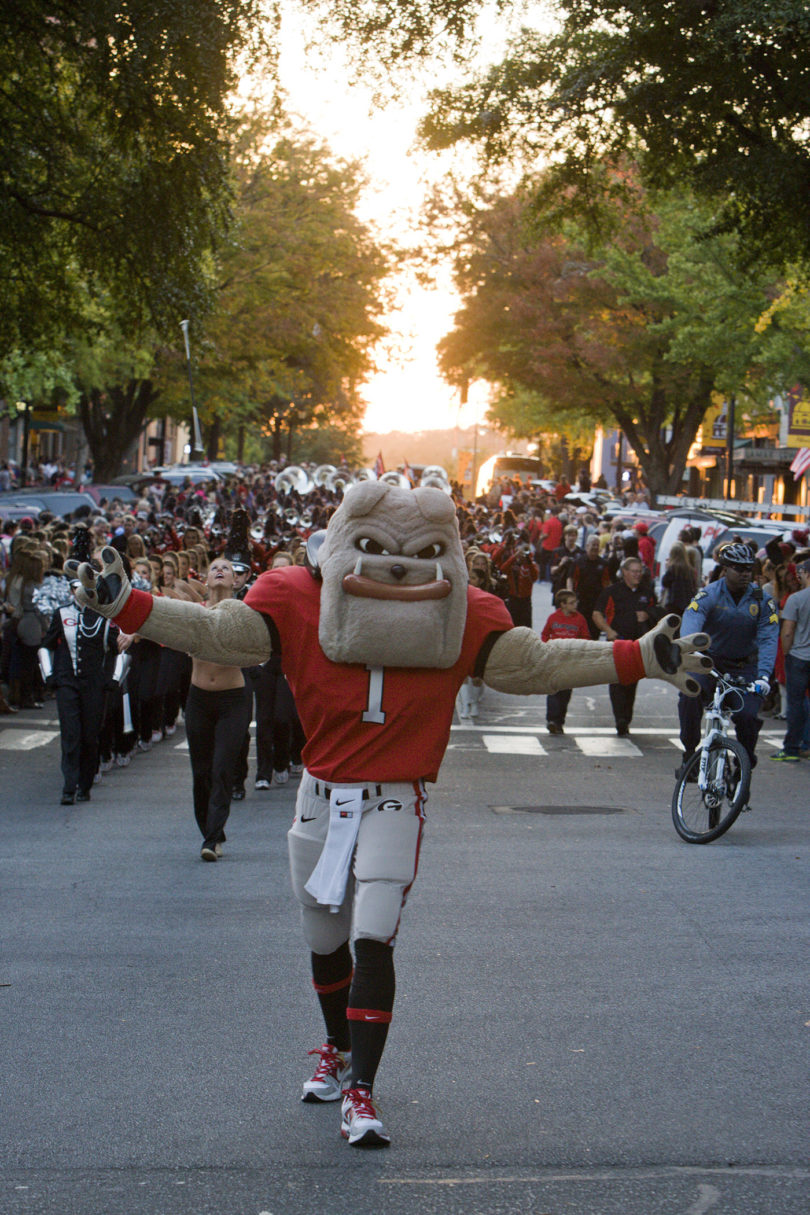 This year's Homecoming parade will kick off Oct. 16 at 6 p.m. and proceed through downtown Athens.

“Sic ‘Em City” is the theme of this year’s Homecoming Week festivities. Activities for students are scheduled throughout the week, and the weekend features events for alumni and the Oct. 4 football game against Vanderbilt University, which includes the crowning of the Homecoming king and queen.

Sponsored by the Homecoming Committee, a part of the University Union Student Programming Board, Homecoming activities began Sept. 28 at 11:30 p.m. as student organizations competed in a street painting contest on Sanford Drive in front of the Tate Student Center.

The official Homecoming kickoff will be the Bulldog Bash on Sept. 29 from 10 a.m. to 2 p.m. at Tate Student Center Plaza with games, free food and giveaways for students.

A lip sync competition is scheduled for Sept. 30 at 7 p.m. in the Tate Student Center Grand Hall. Admission is $5 or free for students.

During Day of Service on Oct. 1, students can participate in volunteer opportunities around the community. Interested students should meet in the Tate Reception Hall at 3 p.m. Transportation will be provided to the service sites, including projects on behalf of the Athens Humane Society, Keep Athens-Clarke County Beautiful, Project Safe, Brooklyn Cemetery and University Nursing and Rehab Center.

The Girl Code + Guy Code Comedy Tour featuring comedians Andrew Schulz and Carly Aquilino will come to the Tate Grand Hall Oct. 1 at 8 p.m. The tour is based on two popular MTV series that feature comedic jabs at relationships, friendships and rivalries between and among men and women.

Advance tickets are $10, $5 for students with valid UGACards who pay activity fees on the Athens campus; day-of-show tickets are $20, $10 for students. Tickets are available at the Tate Student Center cashier’s window, which is open weekdays 9 a.m. to 4 p.m.

Games, prizes, free food and giveaways are the highlights of High Stakes Game Night in the Tate Grand Hall on Oct. 2 from 9 p.m. to 1 a.m. Admission is free for students and $5 for non-students.

The Warnell School of Forestry and Natural Resources will host the Reid Parker Golf Tournament Oct. 3 at 8:30 a.m. at the UGA Golf Course. More information is at http://www.forestry.uga.edu/alumni/homecoming.php.

UGA basketball coach Mark Fox will be the grand marshal for the Homecoming parade, which will kick off Oct. 3 at 6 p.m. and proceed through downtown Athens. Led by the Redcoat Band, the parade will include floats, displays and appearances by the UGA cheerleaders, athletes and university and Athens dignitaries.

Following the parade, the annual Dawgs After Dark Homecoming Carnival will be held on Legion Field from 7-11 p.m. with games, midway rides and free food. Admission is $5, free for students with valid UGACards.

More information about Homecoming events is at http://homecoming.uga.edu.