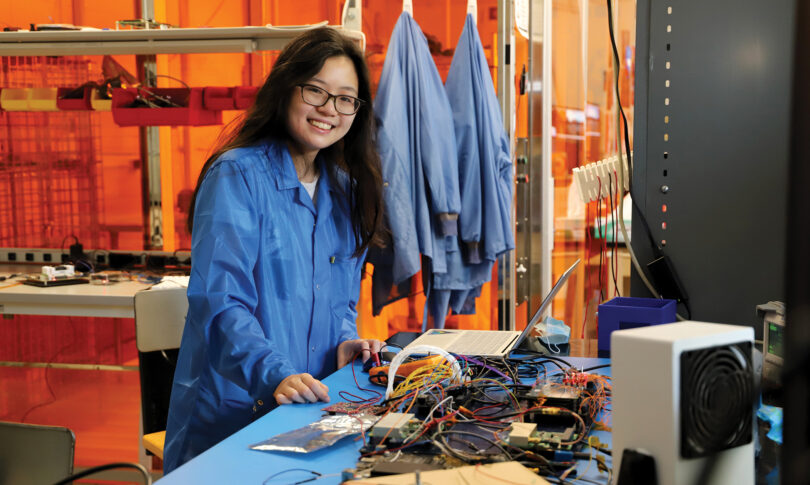 Alexandria Lin, a senior Honors student majoring in computer systems engineering, was part of the team that put UGA’s first satellite in space. She’s been part of the Small Satellite Research Lab since her freshman year. She already has a job lined up after graduation as software developer for satellite missions. A problem-solver at heart, Lin is passionate about “pushing the boundaries of what we’re capable of. There’s so much to discover and explore.”

Family ties to UGA:
I am the first person in my family to attend college.

I chose to attend UGA because:
It was far enough away from where I grew up (Atlanta) that I would have the chance to live independently in a different environment, but close enough to come home when I needed to. The UGA College of Engineering is also one of the fastest-growing colleges in the state, despite being young, and I wanted to experience that. Also, dogs are cool.

How did you choose your major?
When I was in high school, I was part of a First Robotics Competition team, where we built oven-sized robots to compete with and against other teams in a yearly game. The robots had to work together to do things like shoot balls into goals and climb over bars. It was an amazing opportunity for me to participate in a STEM activity, and I really enjoyed having to come with solutions to these fun engineering challenges. My very first year, I helped fabricate pieces for the robot using power tools, which I was very bad at. The next year I opted to try programming instead, and I was not as bad at it. Solving problems through code was much more fun for me. From then on, I knew it was what I wanted to do in college and beyond. 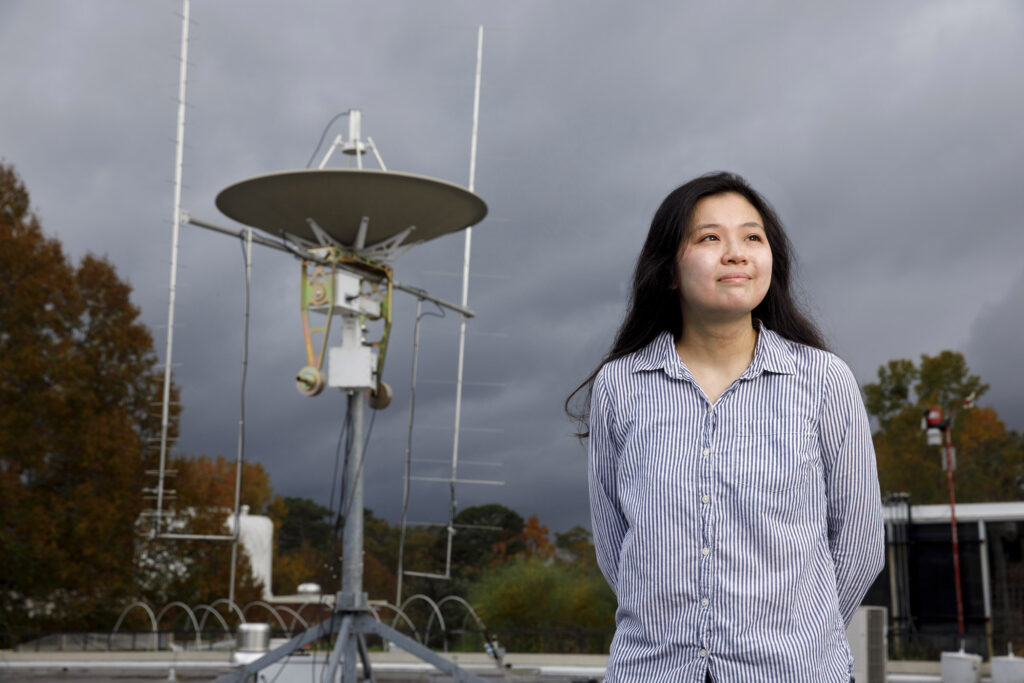 Alex Lin photographed in front of the antenna of the small satellite ground station on the roof of the Geography Geology Building. (Photo by Peter Frey/UGA)

Top university highlights, achievements, awards and scholarships:
In my freshman year, I joined the Small Satellite Research Lab as a member of the Mission Operations team for the lab’s Multiview Onboard Computational Imager CubeSat mission. MOCI will use accelerated hardware to run computer vision algorithms on captured images of various landmarks on Earth onboard. It is sponsored by the Air Force Research Labs through the University Nanosatellite Program. I assisted with Day in the Life testing and documentation in preparation for the then-upcoming major review with the program, the Flight Selection Review. I also received the CURO Assistantship Award twice in this period, which I used to research modeling techniques for the satellite’s attitude determination and control subsystem that controls the orientation of the spacecraft in orbit.

During my sophomore year, I started writing flight software as an electronics team member for the lab’s NASA-sponsored mission, SPectral Ocean Color (SPOC). Its main objective is to acquire multispectral image data of coastal regions in order to monitor wetlands status, water quality and ocean productivity. I helped write the interface for SPOC’s secondary payload (a visible light camera), implemented its mode management/telemetry monitoring software, and carried out hardware testing. At the beginning of my junior year, I took up the lead flight software engineer role and assisted with additional testing and preparing the assembled satellite for handoff to the launch provider. SPOC launched aboard the Northrop Grumman Antares rocket in the Cygnus spacecraft on Oct. 2, deployed from the ISS on Nov. 5, and is currently in orbit. It is UGA’s very first satellite. 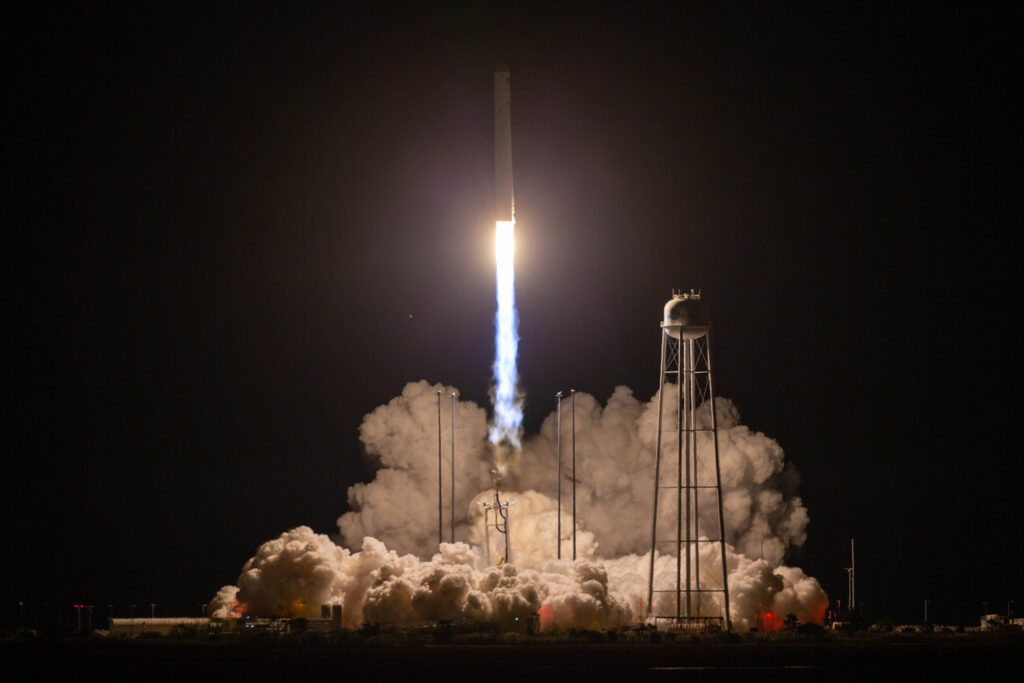 The Antares rocket, which is carrying UGA’s first research satellite, launched at the Wallops Facility in Virginia. (Courtesy of NASA)

As the systems engineer, my leadership responsibilities are to ensure that the entire team meets the requirements for the mission by approving overall technical/design decisions, scheduling periodic reviews with UNP, and overseeing all system-level testing. I also ensure that individual teams communicate with each other so that there are no discrepancies in the satellite design. Alongside other UNP missions, I have presented on our mission for both the Air Force Research Labs and the Department of Defense.

This is my last year at UGA. I have another major review that I need to push through so that we can hopefully secure a launch spot for it later this year. I’ve also been very involved recently with getting our ground communications segment up and running for both SPOC and MOCI mission operations. After those are done, I’ll be able to pass on the mantle and ensure that the SSRL can take our missions to the finish line. Leaving behind the lab — and all the amazing people I work with in it — is a scary thought, but I’m excited for what’s to come. 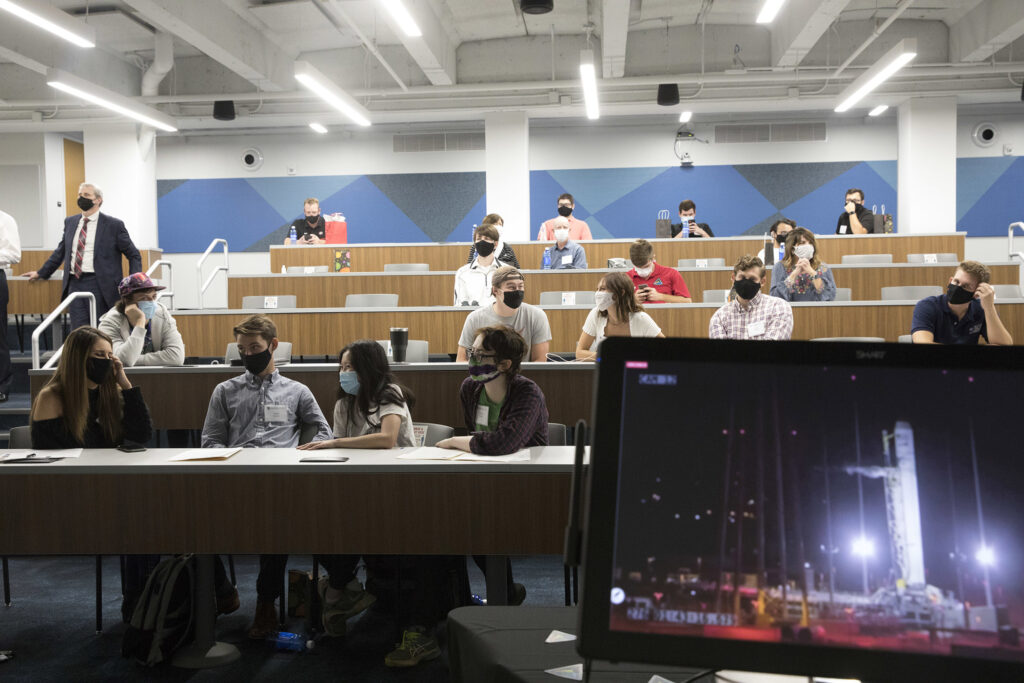 Alexandria Lin (front row, second from right) attends a launch event for the small research satellite her team worked on. SPOC, Spectral Ocean Color, went into space in October 2020 and should be in orbit for a year. (Photo by Dorothy Kozlowski/UGA)

How did you come to work on the satellite launch? What have you learned?
In my sophomore year, I was pulled to work on SPOC’s flight software. This would end up as one of my most formative experiences in the lab. I had the opportunity to build a lot of the core avionics and mission software from the ground up and learn the intricacies of CubeSat operation through spacecraft autonomy, fault management and hardware communication. Writing the software and putting hours into integration and testing had definitely strengthened my technical knowledge. However, it was also formative in a personal way for me: I had the pleasure of working alongside a team of engineers who were the smartest, most hard-working people I’ve ever known. They were just as passionate as, if not more than, me about SPOC’s success. From them, I learned how to work together with others to solve problems, how to make my enthusiasm for challenge infectious, and how to be a leader.

Those skills helped me get through the ordeal of putting SPOC in space. There were many setbacks involving integrating our CubeSat into the deployer, and in those times I felt like I wanted to give up and that I could not do it. But we persevered and SPOC is in orbit, thriving and beaconing. I am very proud that I was a part of the effort that put UGA’s first satellite in space.

My favorite professor is:
David Cotten, who serves as the principal investigator and lab manager of the SSRL. Words cannot express how much of an impact he’s made in my life, or how much he means to me as a mentor, colleague and friend. I feel as though everything I’ve accomplished in the lab would not have been possible without his guidance. The effort and passion that he pours into the lab and its students is unmatched and endlessly inspiring. One day I hope to emulate even a little bit of his drive or his uplifting attitude. Whether it’s in-depth discussions about spacecraft, personal issues or silly jokes, I can come to him for anything.

My favorite place to study is:
The Science Library, especially during finals week. It’s fun to hunker down with a whiteboard doing problems over and over again late into the night, order an incredible amount of food, work on the jigsaw puzzle by the front desk, and see other similarly stressed students doing the same. There’s a certain sad atmosphere to it that’s hard to capture elsewhere.

When I have free time:
I mainly like to play video games, world-build, read, hang out with my friends, and go on hikes. If possible, I do these things from the comfort of my bed.

My favorite things to do on campus are:
Go on walks, whether I’m going to and from the SSRL, getting something at the Bulldog Cafe, or just getting a breath of fresh air.

If I could share an afternoon with anyone, I would love to share it with:
My family and friends. I don’t see them as often as I’d like to because of work. They’re the ones that inspire me to keep going with what I do.

Fun fact about me:
Noodle soup is my favorite food. I know exactly where to get the best noodle soup, and how to make it.

The craziest thing I’ve done is:
While I was interning at NASA Ames in the summer of 2019, I went skydiving with some friends — partly due to peer pressure and partly so I would have a fun tidbit in my life to talk about later. Although I didn’t expect to enjoy any aspect of falling from the sky whatsoever, it was a unique, breathtaking experience that literally changed how I viewed the world. I never want to do it again.

If I knew I could not fail, I would:
Write a fantasy novel. I started building the fictional world I created several years ago and want to publish a series set in that world with the themes and characters I’ve designed. I wouldn’t be the next Tolkien or Sanderson, but it would still be pretty neat. 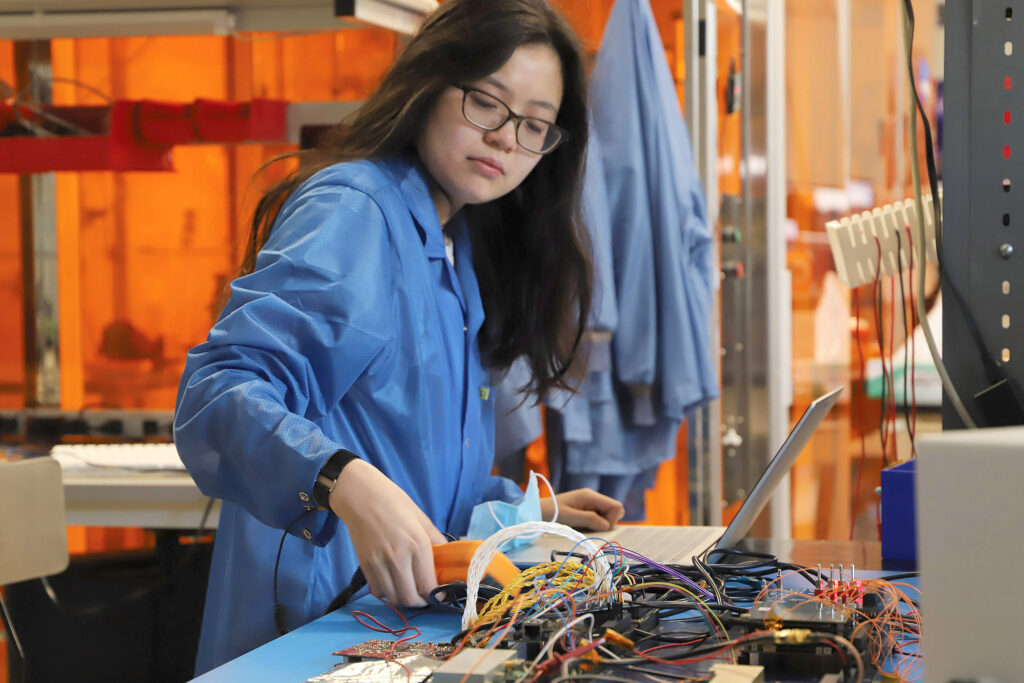 Alex Lin wears a non-static lab coat while working in the Small Satellite Research Lab. Lin is the the systems engineer for her team. (Photo by Stephanie Schupska)

If money was not a consideration, I would:
Gather a team of motivated people and plan an ambitious spacecraft mission or two. There’s so much to discover and explore, on both the scientific and technology demonstration front, and I want to help pioneer that effort. While we’re experiencing the inevitable manufacturer component delay, I’d take a break and travel the world for a little bit. After all, it’s important to appreciate the planet that you’re on, too.

What is your passion and how are you committed to pursuing it?
Building solutions to interesting problems that push the boundaries of what we’re capable of. Right now, I am applying my work in these areas toward spacecraft, and I want to continue doing so, but I’m also very open to pursuing them in other fields as well.

The one UGA experience I will always remember will be:
Going up to the roof of the Physics Building for the first time. It was night-time and chilly, but I remember being enamored with the view of campus and one of my labmates saying something stupid that made me laugh. I felt happy and at peace with everything.

After graduation:
I plan to work at Northrop Grumman Space Systems in Dulles, Virginia, as an embedded software developer for a variety of satellite missions that will incorporate cutting-edge research and technology.

I #CommitTo: Always making the choice to be kind.