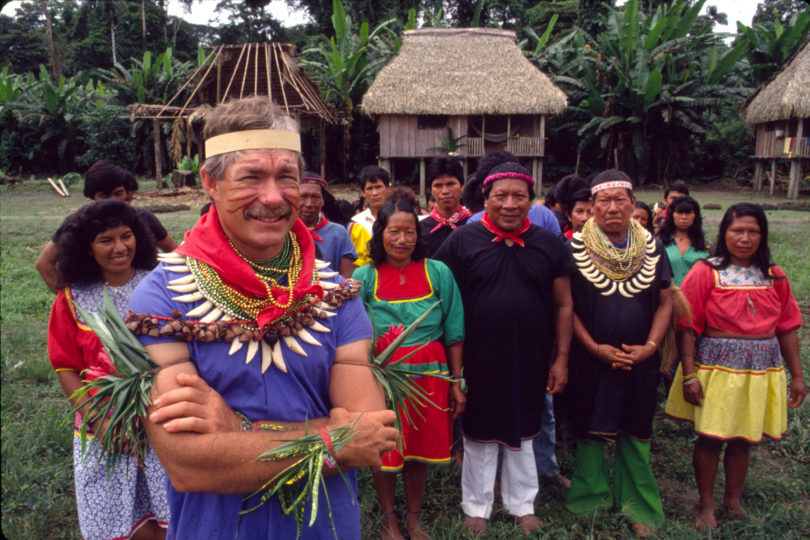 Randy Borman was born and raised among the Cofán people and is now their Chief of Territories.

Athens, Ga. – Randy Borman, the son of Anglo-American missionaries who was born and raised among the Cofán people and who is now their Chief of Territories, will speak Feb. 19 at 4 p.m. in the UGA Chapel as part of the 2015 Global Georgia Initiative, an annual speaker series sponsored by the Jane and Harry Willson Center for Humanities and Arts.

His lecture, titled “An Amazon Contribution to Global Survival,” is presented in partnership with the Latin American and Caribbean Studies Institute and the Willson Center Research Cluster on Indigenous Foods and Fibers. It is free and open to the public.

The Cofán, an Amazonian tribe whose territory covers parts of Ecuador and Colombia, were on the verge of disappearance 40 years ago. As a result of unchecked incursion into their lands by oil companies and related development interests, the Cofán had seen a dramatic depletion and compromising of resources that posed a grave threat to their centuries-old way of life.

Beginning in the mid-1970s, the Cofán began to fight back, successfully lobbying the Ecuadorian government for more control of their lands and bringing new oil exploration to a halt by the 1990s. Borman was the leader of the tribe’s resistance and reinvention.

Though raised in the tribal Cofán rainforest community, Borman was educated in modern, urban schools in Ecuador and attended college in the U.S. He then returned to Ecuador, where the encroachment on Cofán lands had reached crisis proportions. He learned Spanish in order to communicate with the Ecuadorian government on behalf of the Cofán, who spoke only their own indigenous language. This began a decades-long process of negotiation for conservation and the return of land rights now seen as an innovative model for protecting threatened ecosystems.

Borman helped secure land titles for the Cofán and entered into conservation treaties with the Ecuadorian government. He supplemented his education with high-level apprenticeships in herpetology, ethnobotany and ornithology. He then put his expertise to work toward advocacy for and implementation of conservation policies that now protect more than one million acres of Cofán-controlled rainforest, some of the most biodiverse lands on earth. Another of Borman’s innovations was his development of ecotourism as a tool for both raising capital and protecting the environment.

With the Cofán lands effectively stabilized, Borman has adapted his message of rainforest conservation for a global audience.

“We began slowly to realize that we weren’t just preserving this for ourselves,” he said in a 2010 talk at the TEDxAmazônia conference in Manaus, Brazil. “The preservation for ourselves is a minimal part of what we’re doing. The challenge that we are facing at the moment is the rest of the world: How do we go about making this something that the rest of the world will also buy into?

“Indigenous people—we know that we need the forest if we’re going to be able to survive as people, as culture, as a world. The question here is whether the rest of the world is going to wake up to this and be willing to take on their part of the responsibility. This is not something that can happen in isolation.”

During his visit, Borman will also take part in a department of Geography colloquium on “Disappearing Mountains of the Amazon: Land Grabs and Food Security in Cofán Territory.” The colloquium will be held Feb. 20 at 3:30 p.m. in Room 200-C of the geography-geology building.

The Global Georgia Initiative is a series of lectures and conversations whose goal is to present global problems in local context by addressing pressing contemporary questions, including the economy, society and the environment, with a focus on how the arts and humanities can intervene. More information is available at http://willson.uga.edu/programs/public-programs/global-georgia-initiative/.