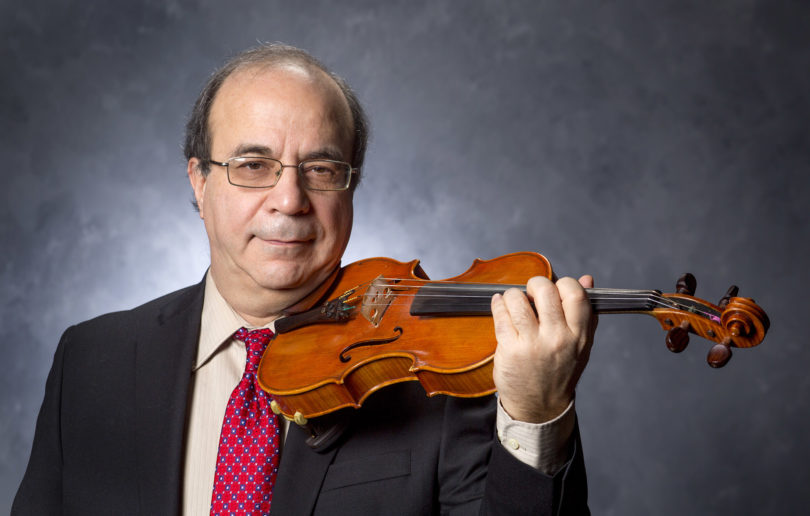 Athens, Ga. – Levon Ambartsumian, Franklin Professor of Violin in the University of Georgia’s Hugh Hodgson School of Music, has been named a Regents Professor, effective July 1.

Regents Professorships are bestowed by the Board of Regents of the University System of Georgia on faculty members whose scholarship or creative activity is recognized nationally and internationally as innovative and pace-setting. The professorship includes a $10,000 salary increase and is granted for an initial period of three years, which may be renewed. No more than one Regents Professorship is given in any year at UGA.

An acclaimed violinist who has performed and taught classes on four continents, Ambartsumian has elevated UGA’s music program in his two decades on campus. He is the founder and conductor of the renowned ARCO Chamber Orchestra as well as a featured soloist who has toured the globe and recorded 40 music albums.

“Dr. Ambartsumian provides his students, many of whom have gone on to prominent positions in orchestras around the world, with unparalleled instruction and mentorship while displaying a virtuosity that places him among the ranks of the world’s finest violinists,” said Pamela Whitten, senior vice president for academic affairs and provost. “His contributions to the performing arts-not just at the University of Georgia but internationally-are nothing short of extraordinary.”

Ambartsumian joined UGA’s faculty in 1995, two years removed from a 25-year career at the Moscow Conservatory, an internationally renowned training ground for violinists, where he earned his bachelor’s, master’s and doctoral degrees. Ambartsumian, who also was appointed to the Central Music School while teaching at the conservatory, came to the U.S. to serve as a temporary faculty replacement at Indiana University before joining the Hodgson School of Music, part of UGA’s Franklin College of Arts and Sciences.

As a musician at the highest international level, Ambartsumian has maintained an impressive performance schedule, including multiple appearances at Carnegie Hall, the Moscow Conservatory and UGA’s Performing Arts Center. During his time at UGA, he has made 18 recordings as a soloist, and his international reputation has attracted and inspired students to come to UGA from around the world.

Ambartsumian founded the ARCO Chamber Orchestra, an ensemble composed mostly of advanced string students, in Moscow in 1989 and moved its home base to Athens in 1995. The orchestra has released 20 commercial recordings and performed throughout the South, at Carnegie Hall and in Venice, Italy. Ambartsumian, who also has served as distinguished visiting professor at Camerata Florianopolis Music School in Brazil for the past decade, teaches master classes across the globe, including in Russia, Canada, Brazil, France, Italy, South Korea and the U.S.

“Dr. Ambartsumian has had a far-reaching impact on the cultural life of the University of Georgia and its community,” Dale Monson, director of Hugh Hodgson School of Music, wrote in a nominating letter. “Though at his arrival he inherited a young, small and modest violin program, he has helped build this into one of the most significant string programs in the South today. His performances have deeply enriched our cultural experience, and his students have embarked on successful careers throughout the world.”

Ambartsumian was named Shining Star of the 2008 Legislative Session by the Georgia House of Representatives. In 2009, he was appointed a senior expert consultant on contemporary string instruments at Glinka State Central Museum of Musical Culture by the Ministry of Culture of the Russian Federation. He was awarded the Gold Medal of the Moscow Composer’s Union in 2009 and was named an Honored Artist of Russian Federation in 1997.

“He brings a level of artistic imagination and immediacy to his playing that is nothing short of magical,” wrote Lewis Nielson, professor and chair of the composition department at Oberlin College and Conservatory, in a nominating letter. “More than almost any performer of his or the next generation, he embodies what a true virtuoso ought to be able to do and, given the ability, do it unceasingly. He is, beyond question, the main reason that the Hodgson School of Music at the University of Georgia enjoys an international reputation in performance.”