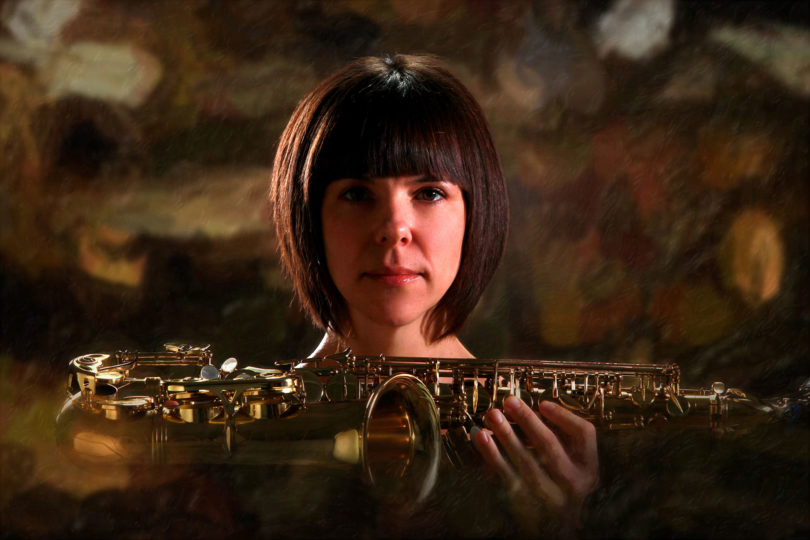 The City of Light and the Classic City become one when the Thursday Scholarship Series’ November concert, “An Evening in Paris,” comes to Hodgson Concert Hall at the UGA Performing Arts Center Nov. 3 at 7:30 p.m.

The performance, the fourth in the Hugh Hodgson School of Music’s flagship concert series, includes works from Paris in the ’20s and ’30s, a vibrant era of collaboration and innovation.

“I’m excited about the musical program because it’s a snapshot of a time in chamber music when popular music styles were blending with classical styles and forms,” said Connie Frigo, associate professor of saxophone at the School of Music. “The result is a cross-pollination of music that represents the cultural dynamic of the world at this time.”

During this period, American jazz had made its way into Paris at the same time that many European composers were traveling to the U.S. and hearing jazz in the setting where it was born, Frigo said.

A masterwork from that period, and the inspiration and centerpiece of this program, is Darius Milhaud’s “Creation du Monde,” written in 1923.

“It was the first work of its kind to truly blend musical elements of jazz and popular music with Western art music,” Frigo said.

Its instrumentation features instruments prominent in American jazz bands: saxophone, clarinet, trumpet, trombone, piano and a complex array of percussion.
“Add strings and wind orchestral instruments to that, along with jazz harmonies and rhythms, and suddenly there are musical colors and a blended style not yet heard before in the concert hall,” she said.

Once Frigo had this piece in mind, the rest of the program fell into place: an all-French chamber music concert with “Creation” and woodwind trios from Francis Poulenc and Milhaud. Frigo knew a special ensemble would be necessary to perform these works, so she pulled together a rare assembly of Hodgson School talent that includes nearly two dozen faculty members.

“Because of everyone’s individual performance schedules nationally and internationally, it’s remarkable that 20 faculty members will share the stage in one evening,” she said. “It’s not often we have the opportunity to collaborate like this alongside one another in a larger ensemble. A few of our top graduate students will be joining us on stage as well.”

And while the musicians’ performance will guide audience members through the era’s art, the concert’s examination of Paris doesn’t stop at the music.

“The audience is going to be transported to Paris in the 1920s and 1930s via a dynamic storyteller who will usher them back to the musical and cultural landscape of that time,” said Frigo.

Washington Isaac Holmes, a doctoral candidate in vocal performance, will pepper the performance with background and commentary about the French capital during the early 20th century.

This performance is also part of the Spotlight on the Arts festival. Tickets are $20 or $6 with a UGA student ID and are available at pac.uga.edu or the PAC box office. Those unable to attend can watch the concert streamed live on the School of Music website at music.uga.edu/streaming.