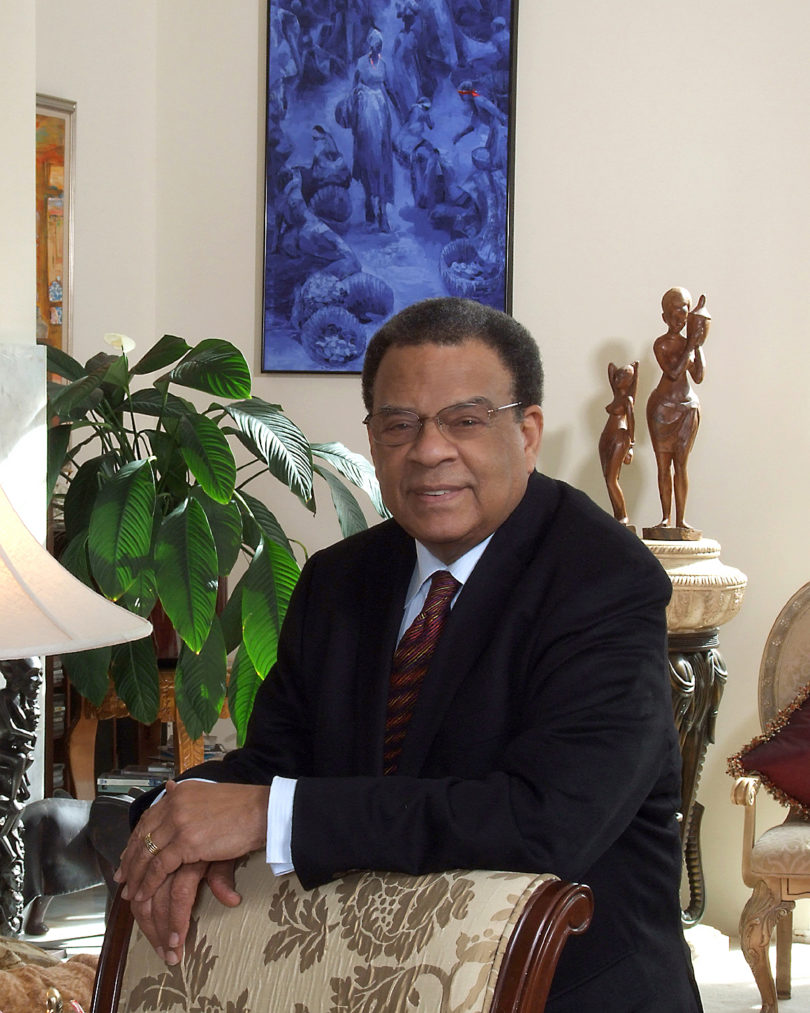 Athens, Ga. – Ambassador Andrew Young, the former mayor of Atlanta, will be the keynote speaker for the 12th annual Martin Luther King Jr. Freedom Breakfast Jan. 23 at 7:30 a.m. in the Grand Hall of the Tate Student Center on the University of Georgia campus.

Sponsored by UGA, the Athens-Clarke County Unified Government and the Clarke County School District, the MLK Freedom Breakfast commemorates the life of the late civil rights leader. This year’s theme is “The Power of the Dream: Justice for All.”

Along with Young’s address, recipients of the President’s Fulfilling the Dream Award will be recognized at the event, which has averaged more than 600 attendees in recent years. The award highlights the work of local citizens who have made significant efforts to build bridges of unity and understanding as they strive to make King’s dream of equality and justice a reality. Nominations to recognize community members, UGA faculty, staff and students are available at http://t.uga.edu/Vv and are due Oct. 31.

Young has served as an ordained minister, a U.S. Congressman, United Nations Ambassador and was the mayor of Atlanta during the Atlanta Olympic Games. He has worked for civil and human rights and has advocated for investment in Africa through GoodWorks International.

He was elected to the U.S. Congress in 1972, the first African-American elected from the Deep South since Reconstruction. He served on the Banking and Urban Affairs and Rules Committees, sponsoring legislation that established a U.S. Institute for Peace, the African Development Bank and the Chattahoochee River National Park, while negotiating federal funds for MARTA, the Atlanta highway system and a new international airport for Atlanta. In 1977, President Jimmy Carter appointed Young to serve as the nation’s first African-American Ambassador to the United Nations, where he negotiated an end to white-minority rule in Namibia and Zimbabwe.

Young was a leader in the effort to bring the Centennial Olympic Games to Atlanta. As co-chair of the Atlanta Committee for the Olympic Games, he oversaw the largest Olympic Games in history in terms of numbers of participating countries, competing athletes and the number of spectators. He was awarded the Olympic Order, the highest award of the Olympic Movement.

Young retired from GoodWorks International LLC, in 2012 after well over a decade of facilitating sustainable economic development in the business sectors of the Caribbean and Africa.

Young has received honorary degrees from more than 100 universities and colleges in the U.S. and abroad. President Carter awarded him the Presidential Medal of Freedom, and France awarded him the Legion d’Honneur. He recently received an Emmy Lifetime Achievement award, and in 2011, his portrait became part of the permanent collection of the Smithsonian National Portrait Gallery. President Bill Clinton appointed him founding chair of the Southern African Enterprise Development Fund.

He serves on a number of boards, including: the Martin Luther King Center for Non-Violent Social Change, Barrick Gold, the United Nations Foundation, the Atlanta Falcons, the Andrew Young School for Policy Studies at Georgia State University, and Morehouse College. “Andrew Young Presents,” the Emmy-nominated, nationally syndicated series of specials produced by Young through the Andrew J. Young Foundation Inc. is seen in nearly 100 American markets and worldwide through the American Forces Network.

Young is the author of three books: “A Way Out of No Way,” “An Easy Burden” and “Walk in My Shoes.” He is the father of four and the grandfather of eight. Young and his wife, educator and civic leader Carolyn McClain Young, reside in Atlanta.

Tickets for the MLK Freedom Breakfast are $20 and $160 for tables of eight. Tickets will not be sold the day of the event. To order tickets, see http://diversity.uga.edu/pdf/MLK_2015_Ticket_FormA.pdf, to pay online by credit card see t.uga/edu/Y6.