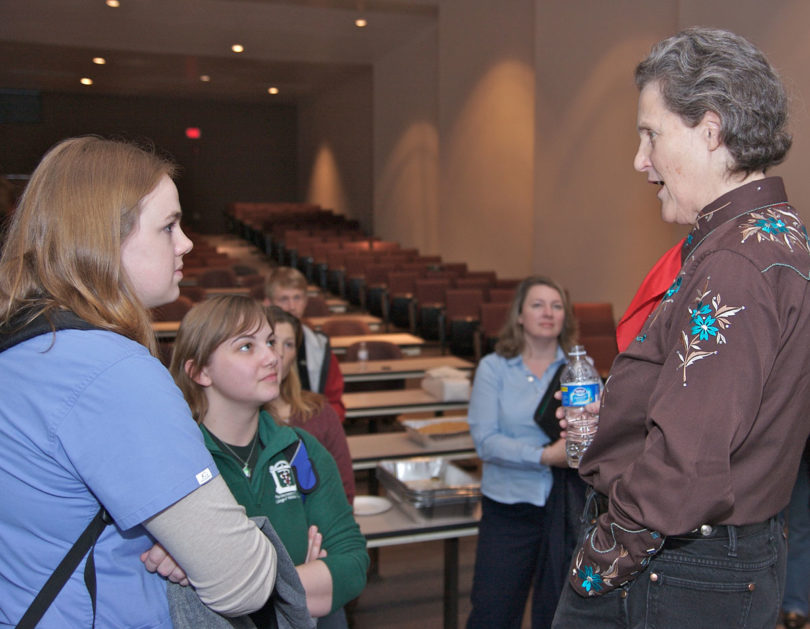 Grandin, a best-selling author, autism advocate and professor of animal science at Colorado State University, shared that and other practical advice on animal handling Feb. 2 with more than 300 students, faculty and staff at the College of Veterinary Medicine.

While this principle may seem obvious to many, what is perhaps less obvious is how animals respond to the world around them in ways that differ from humans. Grandin said she possesses special insight into how animals experience the world because she has autism and thinks in pictures rather than abstractions.

An expert in animal welfare and designing livestock handling facilities, Grandin was brought to UGA by the veterinary students’ Animal Welfare Club, Small Ruminant Club and the student chapters of the American Veterinary Medical Association and the American Association of Bovine Practitioners.

Much of Grandin’s recent work is about improving food animal welfare worldwide. She said her current work focuses on measuring animal welfare through things she directly observes.

“One of the big concerns that I’ve got today is that there are not enough large-animal veterinarians,” she said. “Who’s going to be the next Jane Goodall? We need people to work in the field. If you want to fix the meat industry, you have to live it. That’s my philosophy.”