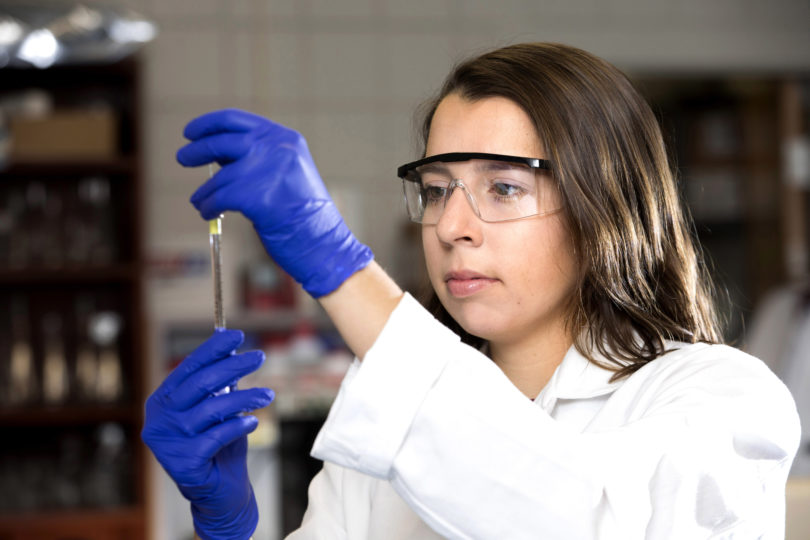 Anita Qualls in her laboratory. (Photo by Dorothy Kozlowski/UGA)

University of Georgia senior Anita Qualls of Johns Creek became the first student in UGA’s history to receive a Churchill Scholarship, which funds American students as they pursue a one-year master’s program in science, mathematics and engineering at the University of Cambridge in England.

The scholarship, which was first awarded in 1963, is given to 15 students each year after a rigorous application and interview process. This year’s recipients come from a mix of public and private institutions ranging from Stanford and Princeton to the University of Virginia and the U.S. Military Academy. Churchill Scholars attend Churchill College at Cambridge, and the award covers full tuition, a stipend, travel costs and the chance to apply for a $2,000 special research grant.

“The University of Georgia congratulates Anita on being selected for this prestigious scholarship,” said UGA President Jere W. Morehead. “We wish her continued success in her educational and career pursuits as a UGA alumna.”

Qualls is an Honors student majoring in biology with minors in Spanish and nutritional science and a certificate in personal and organizational leadership. She will graduate in May. After a year at Churchill College earning a master’s degree in medical science with a focus on obstetrics and gynecology, she will attend medical school and pursue a career in academic medicine. She intends to combine translational research, patient care and mentoring by working at a university hospital.

“It is wonderful to see such a deserving student recognized in this way,” said David S. Williams, associate provost and director of the Honors Program. “Anita has taken advantage of all that UGA has to offer, from study abroad and service to research and internships. She truly stands out, and I am so happy for her.”

Qualls was two weeks into her first year at UGA when she was introduced to research by Jarrod Call, an assistant professor in the department of kinesiology. He became her long-term mentor in regenerative medicine, and last year, she completed an undergraduate thesis based on her work in his lab.

In summer 2017, she spent eight weeks at Harvard Medical School as a research intern for Dr. Pankaj Agrawal at Boston Children’s Hospital. This past summer, she was selected as one of 30 students for a nine-week summer undergraduate research program at New York University, where she conducted biomedical research with Dr. William Carroll at Perlmutter Cancer Research Center. Carroll’s lab focuses on understanding the biological pathways that drive drug resistance in acute lymphoblastic leukemia.

Through her studies of human function and disease, Qualls has published four peer-reviewed papers—she is first author on one—and also authored a paper in a student journal. She has traveled to 13 conferences to give three oral and 13 poster presentations.

At UGA, Qualls is president of Health 4 Kids, co-leader of the Medicine in Literature Book Club and president of the Palladia Women’s Honor Society. She has been an Honors teaching assistant, CURO Summer Fellow, CURO research assistant, Honors International Scholar, Leonard Leadership Scholar, Honors Policy Scholar and Alpha Gamma Delta health and wellness coordinator. She is a member of the Blue Key National Honor Society, Phi Beta Kappa and the Order of Omega.