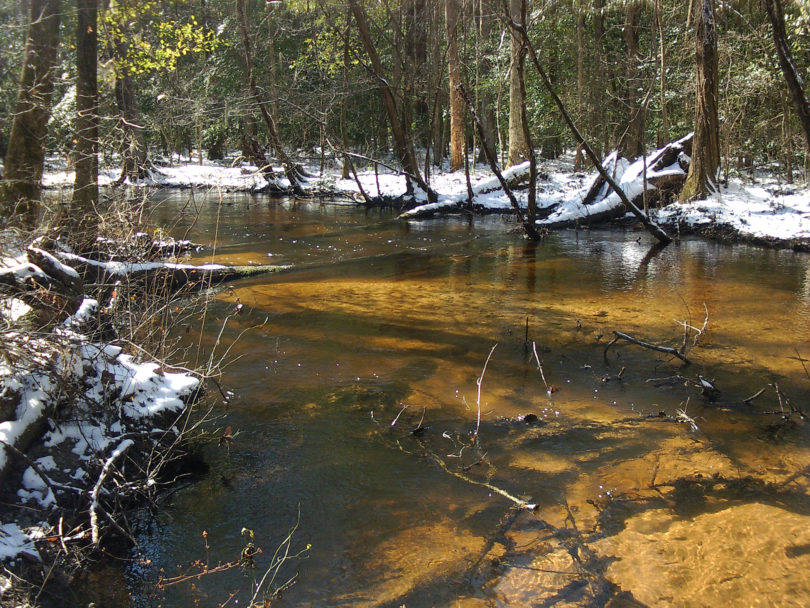 Tinker Creek is a pristine black water stream on the Savannah River Site. The bacteria in this stream are susceptible to antibiotics. (Credit: Linda Lee/University of Georgia)

Aiken, S.C. – While the rapid emergence of antibiotic-resistant bacteria has prompted the medical community, non-profit organizations, public health officials and the national media to educate the public to the dangers of misusing and overusing antibiotics, the University of Georgia’s J. Vaun McArthur is concerned that there’s more to the problem than the misuse of common medications.

McArthur, a senior research ecologist with the Savannah River Ecology Laboratory and Odum School of Ecology, believes environmental contaminants may be partly to blame for the rise in bacterial resistance, and he tested this hypothesis in streams on the U.S. Department of Energy’s Savannah River Site.

The 310-square mile site near Aiken, South Carolina, east of the Savannah River, was closed to the public in the early 1950s to produce materials used in nuclear weapons. This production led to legacy waste, or contamination, in limited areas of the site. This waste impacted some of the streams in the industrial areas.

“The site was constructed and closed to the public before antibiotics were used in medical practices and agriculture,” McArthur said. “The streams have not had inputs from wastewater, so we know the observed patterns are from something other than antibiotics.”

McArthur tested five antibiotics on 427 strains of E. coli bacteria in the streams. His research team collected samples from 11 locations in nine streams, which included sediment as well as water samples. The level of metal contamination among these locations varied from little to high.

The results, published in the journal Environmental Microbiology, revealed high levels of antibiotic resistance in eight of the 11 water samples. The highest levels were found at the northern location of Upper Three Runs Creek, where the stream system enters the site, and on two tributaries located in the industrial area, U4 and U8. The level of antibiotic resistance was high in both water and sediment samples from these streams.

McArthur said Upper Three Runs Creek flows through residential, agricultural and industrial areas before it enters the SRS, so the bacteria in this stream have been exposed to antibiotics. In contrast, U4 and U8 are completely contained within the site and have no known input from antibiotics. However, they have a long history of inputs from the legacy waste.

McArthur conducted a second screening using 23 antibiotics on U4, U8 and U10, a nearby stream with little to no industrial impact.

“More than 95 percent of the bacteria samples from these streams were resistant to 10 or more of the 23 antibiotics,” McArthur said. These included front-line antibiotics-gatifloxacin and ciprofloxacin, which are used to treat basic bacterial infections from pink eye to urinary tract and sinus infections.

The contaminated streams U4 and U8 had the highest level of antibiotic resistance.

“These streams have no source of antibiotic input, thus the only explanation for the high level of antibiotic resistance is the environmental contaminants in these streams—the metals, including cadmium and mercury,” McArthur said.

McArthur said the three tributaries of Upper Three Runs Creek, U4, U8 and U10 vary in the level of contamination respectively, from highly impacted and impacted to not as impacted.

It is possible that antibiotic-exposed wildlife may have dumped waste into these streams, MacArthur said, but only streams with a history of industrial input had antibiotic-resistant bacteria. Bacteria in the six streams in the pristine areas of the site were susceptible to the antibiotics.

McArthur said it is concerning that these antibiotic-resistant streams drain into the Savannah River, a large body of water bordering Georgia and South Carolina. The Savannah River shares at least two major characteristics with many large bodies of water in the U.S. It is in close proximity to residential communities, and it receives industrially contaminated water-prone to antibiotic resistance.

“The findings of this study may very well explain why resistant bacteria are so widely distributed,” McArthur said.

The study, “Patterns of Multi-Antibiotic-Resistant Escherichia Coli from Streams with No History of Antimicrobial Inputs,” is available at http://link.springer.com/article/10.1007/s00248-015-0678-4/fulltext.html.