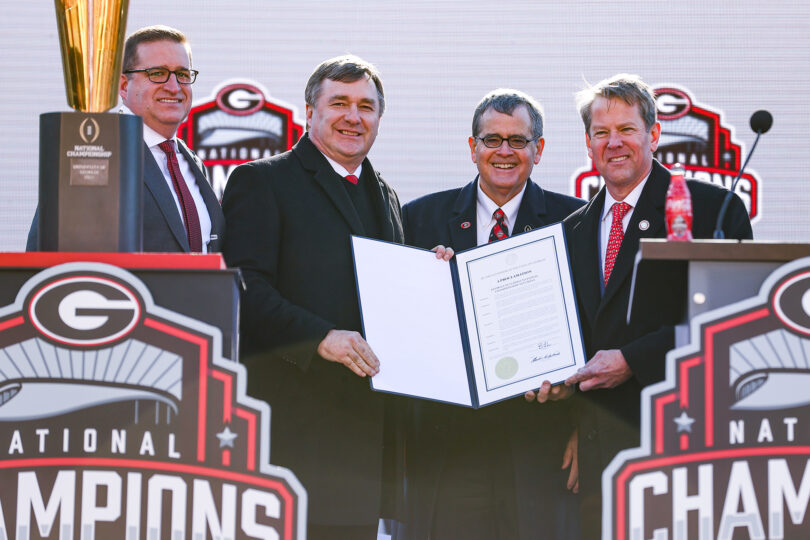 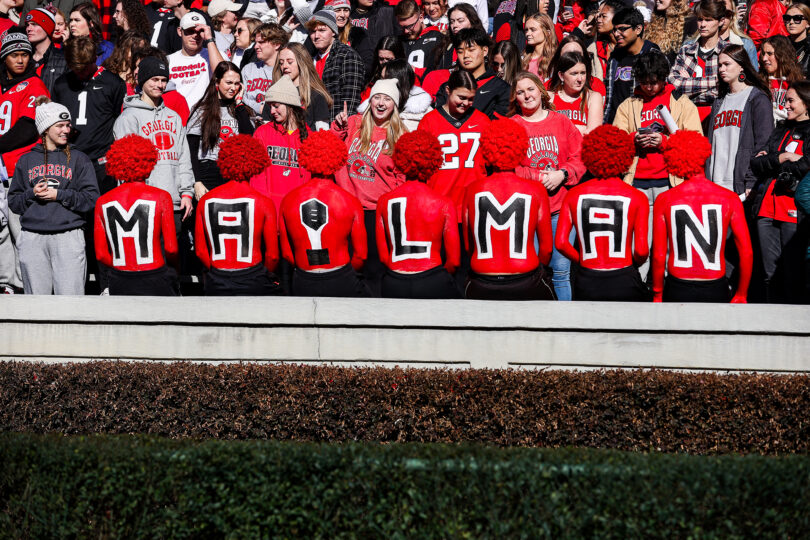 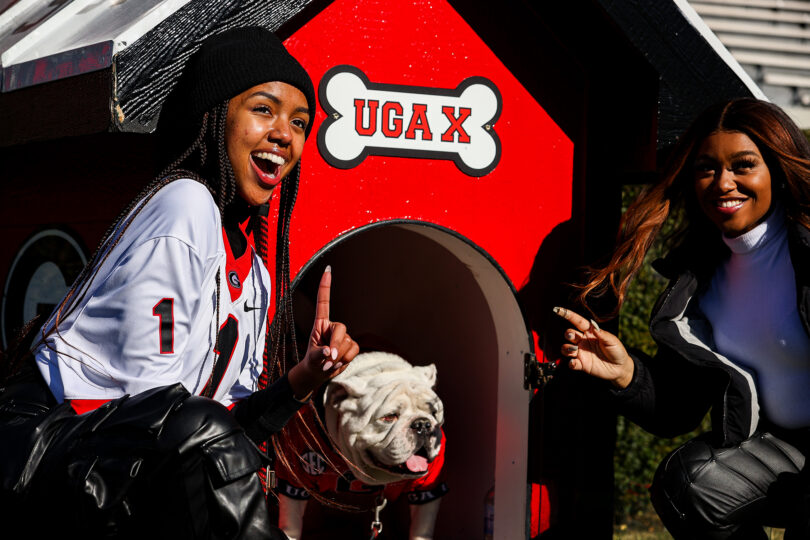 UgaX got some attention during the celebration. (Photo by Tony Walsh) 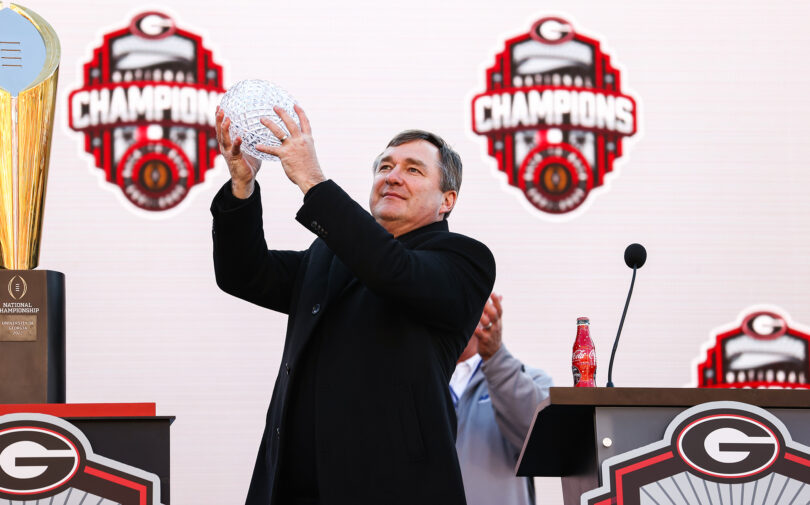 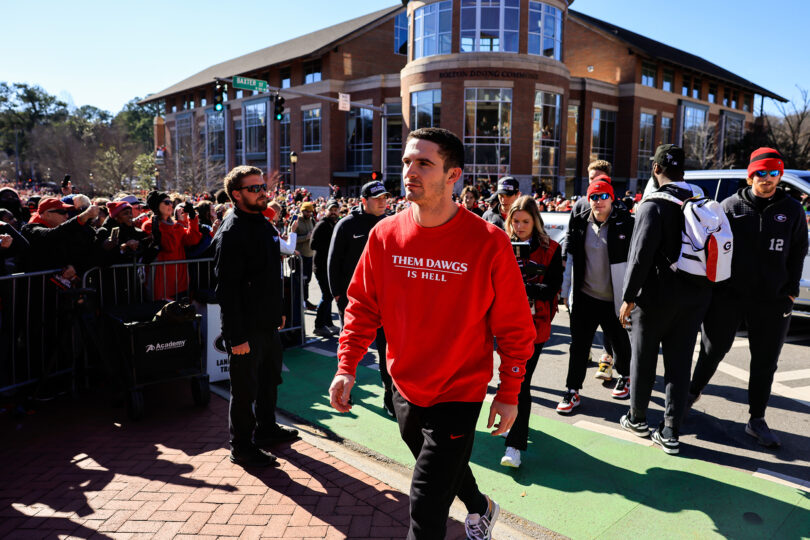 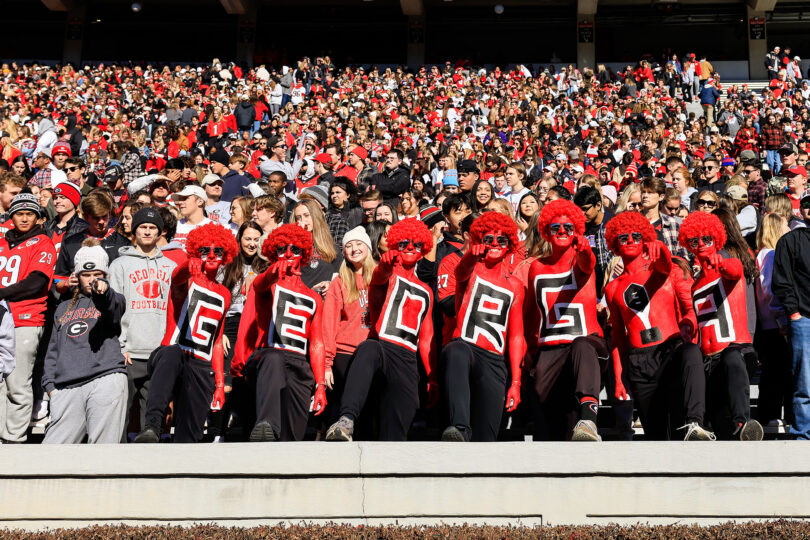 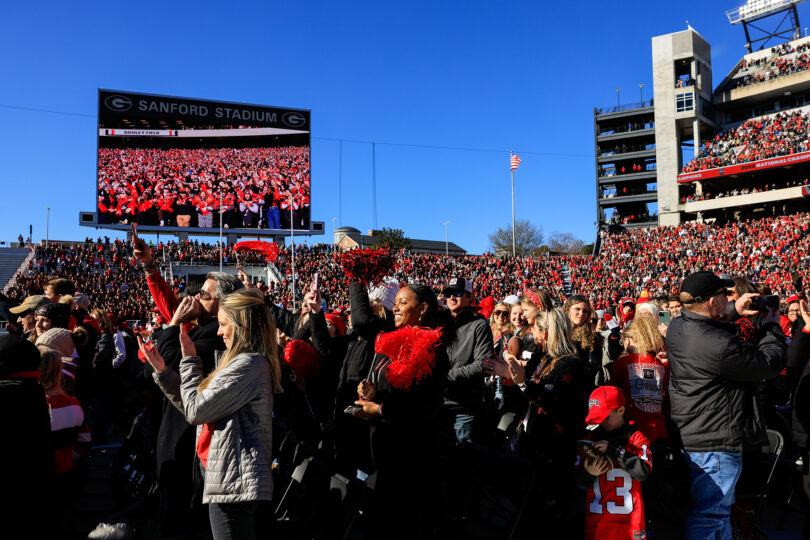 Crowd during the National Championship xeremony at Sanford Stadium. (Photo by Chamberlain Smith) 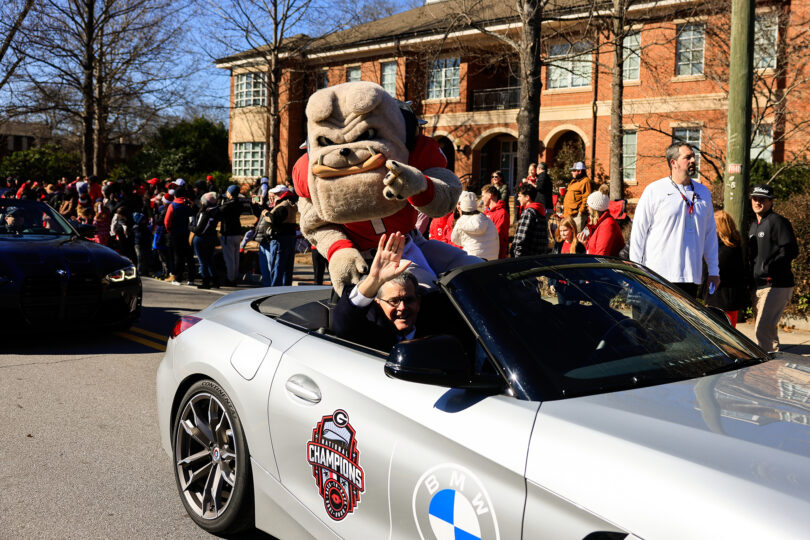 A year ago, when we all packed into Sanford Stadium on a cold January afternoon to celebrate the Georgia football team’s first national championship since the 1980 season, it was with a sense of awe and elation. The Bulldogs, so close for so long, had finally done it.

On Saturday, when we all packed into the stadium on another cold January afternoon, the mood at the celebration of Georgia’s second straight national title was equally ebullient, but it also felt different. There was less a sense of, “Can you believe it?!!!” Instead, it was more like, “Darn right!”

Quoting the great John Wooden, coach Kirby Smart reminded the 50,000-plus on hand Saturday — only about half of the stadium was open due to construction — that winning takes talent. “But to repeat, it takes character,” Smart said in praising his players who came back this season on a mission to keep building and keep winning.

During the 2021 season, the Bulldogs were the best team in the country all season right up until they got humbled by Alabama in the SEC Championship Game. It was a loss that was probably the best thing that could have happened to Georgia if it was going to emerge from the College Football Playoff victorious, holding the big trophy at the end.

This season, the defending national champs opened with a 49-3 thrashing of a good Oregon team, and the stage was set. Georgia showed in that first game, inside its home away from home, Mercedes-Benz Stadium in Atlanta, that the Bulldogs might have had 15 players drafted from the 2021 team, but they were still the team to beat.

And nobody beat them. There were scares, of course, particularly a 26-22 win at Missouri that required a fourth-quarter rally. “Every one of them believed,” Smart recalled Saturday, recounting the look in his players’ eyes at halftime that day.

And then there was the Chick-fil-A Peach Bowl against Ohio State, which required a 14-point fourth-quarter rally. And a bit of luck when the Buckeyes missed a 50-yard field goal attempt as time expired, preserving Georgia’s 42-41 win.

That missed kick sent the Bulldogs west, to SoFi Stadium in Inglewood, Calif., where, 365 days after Georgia bested Alabama for last season’s championship, our heroes took the field as a mighty favorite against underdog TCU. And proceeded to post the most lopsided win in FBS postseason history, 65-7.

There was no need for a rally this time. It was 17-7 after the first quarter, 38-7 at halftime, and after that it was a stress-free ride into the sunset.

“When everyone is pulling in the same direction, toward the same goal, it’s amazing what can happen,” J. Reid Parker Director of Athletics Josh Brooks said during the celebration on Dooley Field.

About 45 minutes before the championship parade’s 12:30 start time, both sides of Lumpkin Street by Spec Towns Track all the way down to the Tate Center were jammed with fans. Some held signs, some held beverages ranging from coffee to ward off the chill to more traditional tailgating choices. Some were properly dressed for the cold and blustery conditions, others (typically of student age) were dressed like they were going to a game in September. And one fan was dressed in a thick, plush teddy-bear onesie, with a red Nick Chubb jersey on top. This is Athens, after all.

As the parade got rolling beside Butts-Mehre Heritage Hall, in the lead, of course, was Smart and his wife Mary Beth. Right behind them was a vehicle containing three critical players without whom this national championship doesn’t happen: quarterback Stetson Bennett, center Sedrick Van Pran and safety Christopher Smith.

All three are talented, all three are experienced, and all three provided so much of the leadership this team needed to stay humble, stay hungry, and, to use words that Smart used often this season, to stay the hunter and not the hunted.

Bennett’s improbable journey from walk-on to Heisman Trophy finalist to the starting QB on back-to-back national championship teams, it’s a story told a million times already. Yet it still seems too improbable to be real. But it is. We watched him make play after play after play in games big and small, and then, in four career College Football Playoff games, we saw him play almost flawlessly, earning Offensive Player of the Game honors each time.

Bennett’s six-year career is now done, and it’s on to whatever path his football career follows. He leaves behind so many memories, so many life lessons about belief, persistence and chasing your dreams, and he leaves behind so many records. In the win over TCU, he set a school single-season record for passes completed (310), attempted (454) and for passing yards (4,127). His completion percentage of 68.28 is the best in program history, His 4,332 yards of total offense are the most in program history.

“I wish he had gone on playing forever. But then, so does everyone else who saw him play, and those football people who never saw him play are the unluckiest people in the world.” Clive Toye, the former president and general manager of the New York Cosmos soccer team, once wrote those words about the legendary Pelé. For Georgia fans, those words surely fit Bennett and his remarkable career, too.

Georgia will likely open next season as the preseason No. 1 team in the country, though TCU, unranked before the 2022 season started, provided a powerful reminder of the value of preseason polls. Still, despite some heavy losses from this season’s squad — Bennett, Smith, Kenny McIntosh, Broderick Jones, Darnell Washington, Nolan Smith, Jalen Carter and Kelee Ringo, to name a few — the 2023 Bulldogs will still be loaded with talent. And they will still be on the hunt.

“You don’t inherit greatness,” Smart said of his message to the incoming players. “You don’t inherit this. You earn it. And that’s what this team did over the last year. They earned every single victory along the way.”

No school has won three straight titles in the modern era. Is a three-peat unlikely? Perhaps. Impossible? Not at all. Georgia football has arrived at the place where it reloads, it doesn’t rebuild.

SEC Commissioner Greg Sankey wrapped up his remarks by pointing out how many days it was until the start of next season; how many days until the 2023 SEC Championship Game; and if you’re wondering, it’s 350 days, Sankey said, until the next College Football Playoff semifinals.

But before you get too caught up in 2023 depth charts and who’s turning pro or entering the transfer portal, make sure you take time to savor what we’ve been lucky enough to witness the past two seasons. Nobody knows better than Georgia fans how hard it is to climb to the top of the mountain.

To all of Georgia’s students, UGA President Jere Morehead reminded them that football national championships don’t usually happen here every year.“Enjoy what has been created, and be a part of what is coming in the future,” he said.

Toward the end of his remarks, Morehead stated the overriding fact of the day: “Indeed, it is a great time to be a Georgia Bulldog.”

Continue to remember and savor that win over Alabama in Indianapolis. Remember and savor the spectacular comeback in the Peach Bowl before the coronation in California. These are special days at Georgia, unlike any we’ve seen before. Celebrate them, cherish them, honor the Bulldogs that made them happen. And cheer like mad the next time Georgia takes the field, as back-to-back national champions.