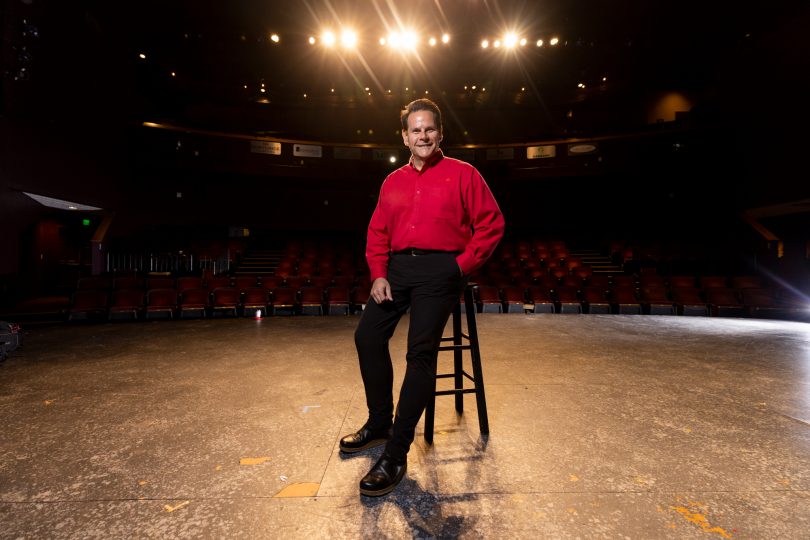 The stage is set for Anthony Rodriguez BFA '91 to fully reopen the Aurora Theatre in Lawrenceville. The story of how he and his theatre navigated the pandemic is dramatic in its own way. (Photo by Andrew Davis Tucker/UGA)

Though he’s not necessarily proud of it, Anthony Rodriguez’s career path was heavily influenced by a case of math phobia.

Coming into the University of Georgia, Rodriguez BFA ’91 liked the idea of standing in front of people and convincing them that something was true. So, he thought he’d be a great lawyer.

“And then it came down to the fact that law had a math requirement, so I went to the theater instead,” he says.

Things turned out just fine for Rodriguez, the co-founder and producing artistic director of the Aurora Theatre in Lawrenceville, who’s garnered a respectable acting resume that includes stage, commercials, and voice work.

“The ironic part, is virtually all I do now is math,” says Rodriguez, who manages a $3.2 million annual budget.

That’s been especially true during a pandemic that’s shut down any resemblance of normalcy to his professional theatre. It turns out that Rodriguez spent his whole life preparing for the role of the resourceful and resilient producer.

Act I: An Actor Prepares

At UGA, once Rodriguez decided on a theatre major, he threw himself into it. His first passion was acting, but he got a job in the scene shop and learned how to build sets, paint scenery, and operate the theatre’s fly system.

He found a few choice roles on the stage too, including playing the lunatic Renfield in the theatre department’s production of Dracula.

The diversity of experience proved useful.

Rodriguez went on to an acting career in Atlanta and Chicago, but he supplemented his income with gigs in scene shops and event companies.

Act II: The Dawn of a New Theatre

Over time, Aurora Theatre has become a valued part of the community. So much so, that the City of Lawrenceville partnered with the theatre on a $35 million expansion project, which broke ground in 2019. The project will add a 500-seat theatre to the existing main stage, a converted Methodist church sanctuary that holds 250.

Act III: The Lights Go Out

Aurora was two weeks into a seven-week run of the musical On Your Feet, the story of Emilio and Gloria Estefan, when the pandemic shut everything down.

The team left the stage set and the costumes in the dressing rooms, hoping to pick it all back up.

“When it first started, we thought we’d be gone for a couple weeks, a month maybe,” Rodriguez says.

Instead, Rodriguez had to put his math skills to the test, getting to the tedious work of fundraising and applying for grants and loans to keep his theatre alive. But Rodriguez also knew that he had to continue to engage with his audience.

When it first started, we thought we’d be gone for a couple weeks, a month maybe.” — Anthony Rodriguez, co-founder of the Aurora Theatre in Lawrenceville

Act IV: The Show Goes On

Aurora Theatre tried a few digital performances, but Rodriguez admits that his small company can’t compete in digital entertainment with the likes of Netflix and Hulu.

“My content is never going to be that well produced. So we started doing the things we do best.”

That is live, in-person, community-building performances.

They hosted outdoor stand-up comedy and a cabaret show. Rodriguez performed his annual one-man “A Christmas Carol,”
allowing only 40 people into the main theater, less than 25% capacity.

The shows have been successful. Performances have sold out. Still, the theatre is barely treading water.

Construction continues on the expanded theatre, including an outdoor courtyard for safer performances. Rodriguez hopes the project will be done this summer and that things get closer to normal—whatever that looks like—for a big October show.

But he’s not ready to start planning for the next major production. Yet. For now, he’s focused on what he can do: “Just stay in touch and connected with our patrons in the best way possible so that when we do re-open, they know we’re still here and that we’re still doing the work that we’ve always done, which is building a legacy for the arts in Gwinnett County.”