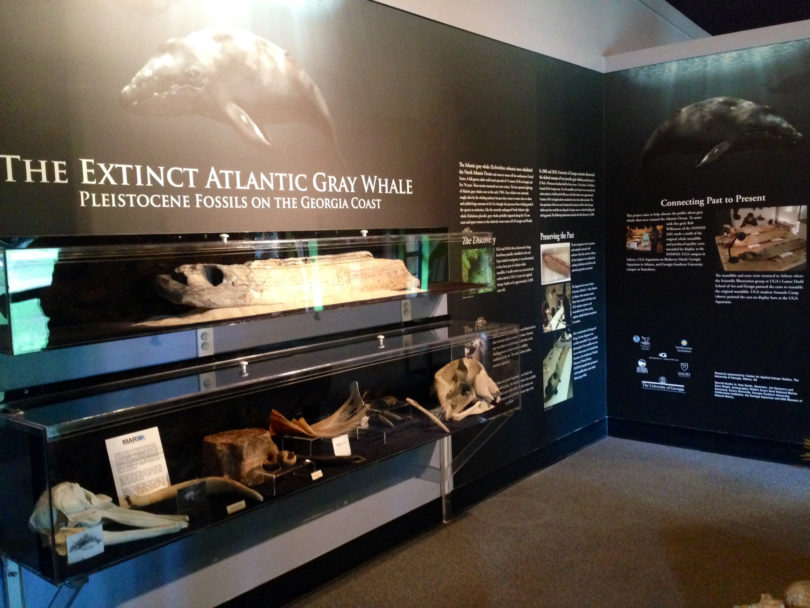 The fossilized remains of an extinct Atlantic gray whale are the focal point of an exhibit at the University of Georgia Aquarium on Skidaway Island. The exhibit includes information about the fossils that were discovered off the Georgia coast

Savannah, Ga. – The fossilized remains of an extinct Atlantic gray whale are the focal point of a new exhibit at the University of Georgia Aquarium on Skidaway Island. The exhibit includes information about the fossils that were discovered off the Georgia coast, as well as a painted cast of one of the fossils-the mandible or lower jawbone.

In 2006, divers from the University of Georgia discovered a 36,000-year-old gray whale fossil while diving near Gray’s Reef National Marine Sanctuary. The whalebone turned out to be that of an Atlantic Gray whale, which became extinct in the 1700s.

Gray whales were hunted to extinction during the height of the whaling industry. They were a sought after species because they swam close to shore and yielded a large amount of oil.

Scott Noakes of the UGA Center for Applied Isotope Studies was one of the divers responsible for the find, along with fellow UGA scientists Ervan Garrison and Alexander Cherkinsky and Greg McFall of the National Oceanic and Atmospheric Administration.

“There have been a few gray whale remains found on beaches in New York, South Carolina and Florida, but none other offshore,” said Noakes. “The Georgia find is also considerably older than any other found along the U.S. coastline.”

The new UGA Aquarium exhibit aims to educate the public about the gray whales that were once prevalent in the Atlantic Ocean. It looks at the entire gray whale project from the initial discovery to making casts of the bones for display. Noakes, UGA Marine Extension, Georgia Sea Grant, Gray’s Reef National Marine Sanctuary, Emory University, the Smithsonian National Museum of Natural History and the Scientific Illustration Group at UGA’s Lamar Dodd School of Art and Design all collaborated in its creation.