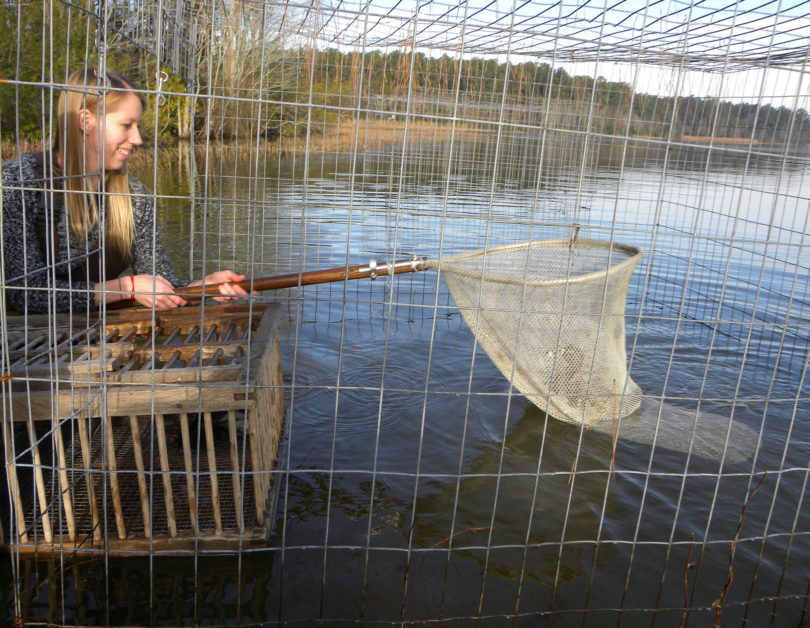 Research team member Ricki Oldenkamp removes a ring-necked duck out of a trap before banding and relocating to the more contaminated pond. (Credit: Chris Leaphart)

Aiken, S.C. – Migratory waterfowl around the world travel hundreds to thousands of miles annually, stopping at lakes, ponds and marshes to refuel and breed. Some of these aquatic rest stops may be at sites polluted by remnants of radioactive waste from nuclear production or accidents, exposing the birds to contamination that they take with them. This poses a potential risk to humans if the waterfowl enter the food chain.

Now scientists at the University of Georgia have identified two factors that affect the accumulation of a radioactive contaminant in waterfowl. The study, published recently in the Journal of Environmental Radioactivity, reveals that the wild birds’ uptake of radiocesium is influenced by two main factors-the amount of time the bird inhabits a contaminated body of water and the bird’s foraging habits.

Robert Kennamer, lead investigator on the study, guided a team of researchers that examined American coots and ring-necked ducks at the U.S. Department of Energy’s Savannah River Site, a former nuclear production facility. Every year thousands of migrant waterfowl visit SRS, which is closed to waterfowl hunting. These birds forage in contaminated areas before resuming their journeys.

“The breeding ranges for both coots and ring-necked ducks extend well into the Canadian provinces of Ontario and Quebec, so these birds can be making migrations in excess of 1,200 miles,” said Kennamer, a research professional at UGA’s Savannah River Ecology Laboratory.

For the study, American coots and ring-necked ducks were relocated from a less-contaminated lake at the site to a smaller pond that received higher concentrations of the contaminant. Radiocesium was a byproduct of nuclear production, from the 1950s to 1965.

“Thirty days after we released them onto the pond, we saw increased levels of the contaminant in the coots. For coots that remained on the pond longer-up to five months-there was no additional elevation,” Kennamer said.

In contrast, radiocesium levels continued to rise in the ring-necked ducks up to 2 1/2 months after the team moved them onto the pond.

“The differing rates and levels of radiocesium accumulation observed between coots and ring-necked ducks in this study reveal the complexity of how radioactive elements are distributed and accumulated among various plant and animal species within ecosystems,” said James Beasley, co-investigator on the study and assistant professor at SREL and UGA’s Warnell School of Forestry and Natural Resources.

Ring-necked ducks are diving ducks, foraging at the bottom of the water body. Their food comes into direct contact with the sediments where radiocesium settles. In contrast, coots primarily feed on aquatic vegetation in shallow or surface water.

Radiocesium is completely released from the waterfowl 30 days after they leave the site, so the potential risk to humans is short term, according to Kennamer.

But the study results are a clear evidence that future cleanup interventions to these aquatic areas must not produce vegetation, or migratory waterfowl will be lured by the bountiful supply and linger in what appears to be a haven.

“Residence time is a critical determinant in the amount of contaminant a bird accumulates,” Kennamer said. “These birds are highly mobile. If you increase food resources in an area and make it more attractive for birds to be there, then they are going to stay in the area longer and their potential to become contaminated will increase.”