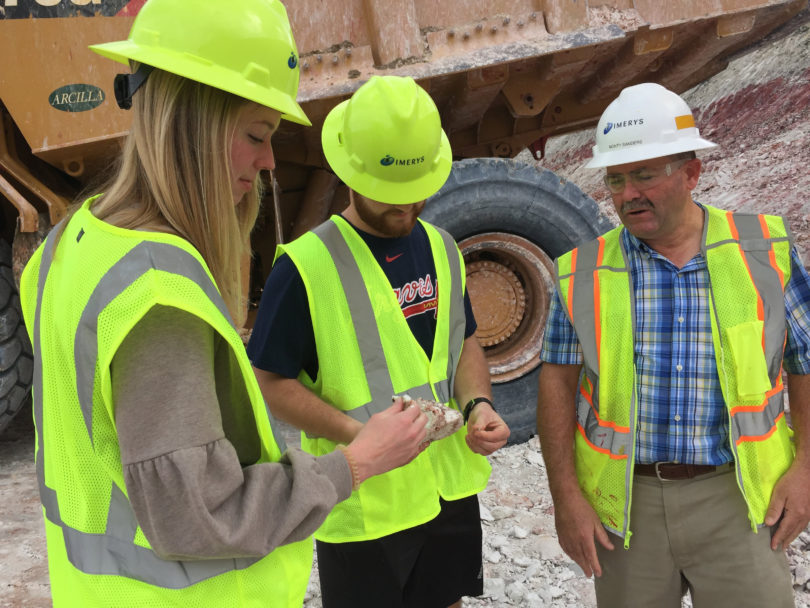 Michael Veal adjusted his hard hat. It was not every Saturday the Terry College of Business student ventured into a kaolin mine, one of the giant valleys throughout Washington County.

More than a field trip, this was an opportunity for Veal, along with nine other students in the Institute for Leadership Advancement at Terry, to learn about kaolin, a mineral found in Washington County. As their ILA capstone project, the students helped the community evaluate the potential for a museum to highlight kaolin, which has created jobs and shaped lives in the middle Georgia community for more than 50 years.

ILA faculty member and service-learning liaison Jodi Barnes said the Archway Partnership was chosen for capstone projects because UGA already has a strong presence in those communities and can easily identify the needs to be addressed.

While most classes devote all their resources to one organization, Barnes said, the model Archway provides is unique.

“For us, the model is very different. The service-learning project lasts an entire year,” said Barnes. “Archway offers expert local contacts for these groups, and ultimately they’re supporting and enriching the greater state of Georgia.”

Begun in 2005 by UGA Public Service and Outreach and UGA Cooperative Extension, the Archway Partnership places UGA faculty in Georgia communities, providing them access to the resources of UGA to help address critical locally identified needs and opportunities.

The kaolin museum was identified as an opportunity for Washington County to showcase the chalky, white substance used in products including glossy paper, cosmetics and rocket ships.

Like many in the town, Trey Sheppard’s livelihood has been shaped by kaolin. He is vice president of crude kaolin mining operations for Howard Sheppard Inc., a Sandersville business that goes back three generations.

According to the professors, kaolin formed due to the location of the fall line, a geological boundary running across the state from Augusta to Columbus. In prehistoric times, the fall line was the shoreline between Georgia and the Atlantic Ocean, when most of the present-day state was underwater. Fall lines are the borders where the land would have “fallen” into the ocean.

Sheppard believes knowing this history of the state, and how it relates to modern discoveries like kaolin, is important. These factors have all shaped Georgia.

“Whether it’s school groups or people traveling through, we think it would be a great resource to bring people to the community,” said Sheppard. “It’s really for people all around this area to understand what we were like millions of years ago.”