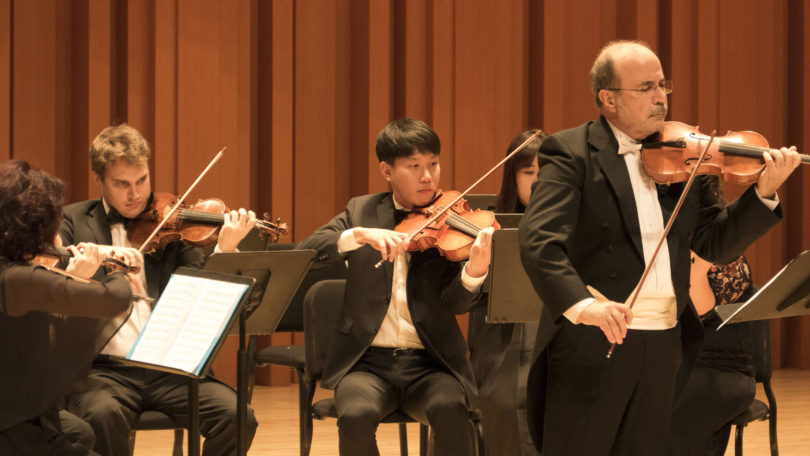 The next ARCO Chamber Orchestra concert on Oct. 8 will feature a variety of music.

The opening program is the Concerto in D minor for Two Violins and Orchestra by Bach. It will be performed by Regents Professor Levon Ambartsumian, who also is Franklin Professor of Violin and artistic director of the ARCO Chamber Orchestra. Ambartsumian will be joined on the piece by Sinisa Ciric, UGA alumnus and Savannah Philharmonic concertmaster.

The second piece of the program is Cras Ignotum (Unknown Tomorrow), the violin concerto written for strings, piano and percussion by Podgaits, a world-renowned Russian composer. It is a single-movement work that depicts a meditation on the story of human life with its dramatic conflicts and moments of hope, happiness, inevitability and hopelessness. Featured artists are Ambartsumian (violin solo), Anatoly Sheludyakov (piano) and Denis Petrunin (percussion). Jaclyn Hartenberger will join as a guest conductor.

Last on the program is Les Saisons, The Seasons, Op. 37, by Tchaikovsky. It consists of 23 character pieces with one for each month. Tchaikovsky’s depiction of each month and sophisticated forms and harmonies will bring vivid imagery to the stage. This keyboard masterpiece is arranged for a string orchestra by Russian composer Igor Bulakhov.

The ARCO Chamber Orchestra was originally founded in Russia in 1989 at the Moscow Tchaikovsky Conservatory by Ambartsumian. When he joined the UGA faculty in 1995, Ambartsumian remained the artistic director and conductor of the orchestra, moving its home base to the Hodgson School.

Tickets are $12 for adults or $3 with a UGA student ID and can be purchased at pac.uga.edu or by calling the PAC box office at 706-542-4400. Those unable to attend can watch the concert live on the school’s website at music.uga.edu/live-streaming.

The UGA Hugh Hodgson School of Music sponsors more than 350 performances each year. To view the performance calendar, subscribe to the weekly email concert listing or learn more about the School of Music, go to music.uga.edu.