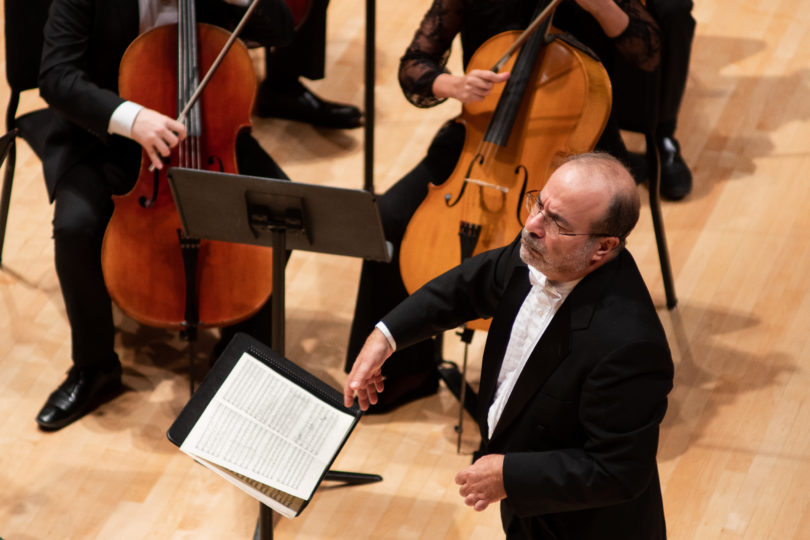 Levon Ambartsumian will perform the world premiere of a new orchestration of Schubert’s best-known chamber works, Fantasia in F minor.

The concert will take place in Hodgson Concert Hall on April 9 at 7:30 p.m. and will highlight works by Mozart, Schubert and Glinka.

The first part of concert will feature Mozart’s Piano Concerto No. 12 in A major, K. 414. Known for its brilliant character and natural and pleasing melodies, the concerto was written in 1782 for home performances and was orchestrated for small chamber orchestras. Rivkin, professor of piano, will perform as a soloist in this piece.

The second part of the concert will open with one of Schubert’s best-known chamber works, Fantasia in F minor. This composition, originally written for piano four-hands where two players perform on one piano, was orchestrated for solo violin and string chamber orchestra by the world-renown composer Efrem Podgaits. The North American premiere of this arrangement will be performed by the Ambartsumian, the Franklin Professor of Violin. Ambartsumian, who performed the world premiere in Moscow last month, will perform the South American premiere this summer in Santiago, Chile.

For the finale, under the baton of Ambartsumian, the artistic director of ARCO, the ensemble will perform Valse-Fantasie by Mikhail Glinka. Also known as Melancholy Waltz because of its minor key, this piece was initially a work for piano. Award-winning Russian composer Igor Kholopov arranged it for a small chamber orchestra with four woodwinds and strings.

Tickets are $12 for adults and $6 for children and UGA students and can be purchased online at pac.uga.edu, by calling 706-542-4400, or in person at the Performing Arts Center box office at 230 River Road in Athens.