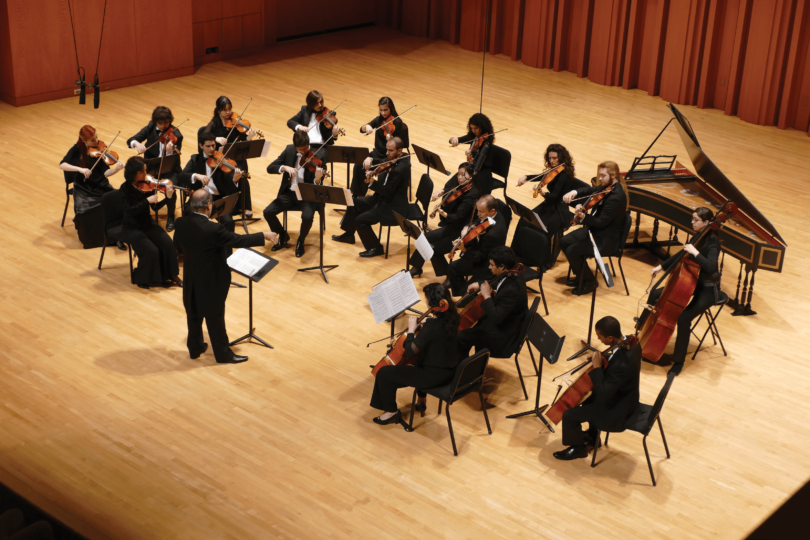 The ARCO Chamber Orchestra’s first concert of the season will take place in Hodgson Concert Hall Oct. 9 at 7:30 p.m.

The ensemble will perform chamber works by Alexander Arensky and Mikhail Glinka as well as Pictures at an Exhibition by Modest Mussorgsky, arranged by award winning composer Igor Kholopov.

“The concert program includes rarely performed masterpieces as well as a foreign premiere,” said Levon Ambartsumian, conductor and Franklin Professor of Violin. “Glinka’s chamber music rarely gets performed. There are no commercial recordings. And Mussorgsky’s arrangement is a foreign premiere. I believe this version is more stylistically and emotionally closer to the original than Ravel’s version.”

For the first part of the program, the ensemble will perform Variations on a Theme by Tchaikovsky Op.35a, composed in 1894 by Arensky as a tribute to Tchaikovsky’s death. The set of variations are based on a theme from Tchaikovsky’s children’s song “A Legend, Op. 54/5.”

The second half of the concert will feature Mussorgsky’s Pictures at an Exhibition. This work was originally a piano suite, transformed into an orchestral piece by Maurice Ravel. However, the ensemble will perform an arrangement by Kholopov, the winner of the International Antonin Dvorak Composers Competition. His orchestration unveils the variety of timbre and texture of the string orchestra.

The ARCO Chamber Orchestra was originally founded in Russia in 1989 at the Moscow Tchaikovsky Conservatory by Ambartsumian. When he joined the School of Music faculty in 1995, he remained the artistic director and conductor of the orchestra, moving its home base to the Hodgson School, where the ensemble is now an international blend of talented musicians.

Tickets to the concert are $12 each or $6 with a UGA student ID and can be purchased at pac.uga.edu or the PAC box office. Those unable to attend can watch the concert live on the Hodgson School’s website at music.uga.edu/live-streaming.