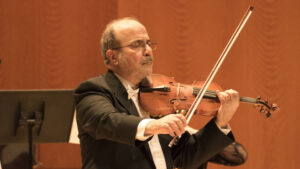 The first part of the concert features three violin concertos by Antonio Vivaldi, an Italian composer best known for virtuosic violin repertoires in the Baroque period. All nine violinists in the orchestra will perform solos throughout the pieces.

The ARCO Chamber Orchestra was originally founded in Russia in 1989 at the Moscow Tchaikovsky Conservatory by Ambartsumian. When he joined the UGA faculty in 1995, Ambartsumian remained the artistic director and conductor of the orchestra.

The scheduled performance will take place Oct. 16 at 7 p.m. and will be streamed live on the Hodgson School website at https://music.uga.edu/live-streaming.