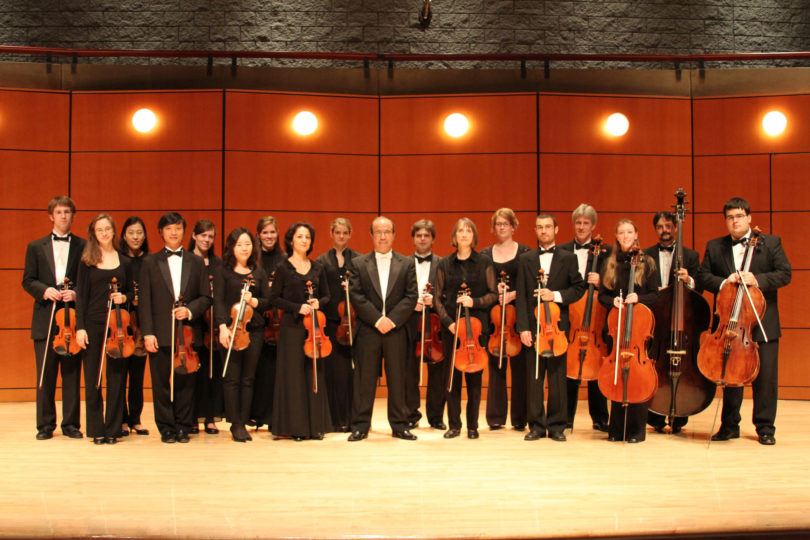 The ARCO Chamber Orchestra will present the final 2nd Thursday concert of the academic year April 12 at 8 p.m. in Hugh Hodgson Concert Hall. Tickets are $18, $5 for UGA students with ID.

Ambartsumian also will be featured in another work by Podgaits, Kol Nidrei (All Vows) for violin and orchestra. Rounding out the concert is Franz Schubert’s Sonata for Violin and Orchestra, also featuring Ambartsumian, and Bach’s Concerto for Oboe, Violin and Orchestra featuring oboist Reid Messich and violinist Ruth Monson, a part-time instructor in the School of Music.

Podgaits’ work Cras Ignotum (Unknown Tomorrow), was composed in 2010 for Ambartsumian. A single-movement work, Cras Ignotum is a meditation on the story of human life—its dramatic conflicts and its moments of hope, happiness, inevitability and hopelessness.

The other work by Podgaits featured in the concert, Kol Nidrei, is a ceremonial declaration of a rejection of all vows.

“I became extremely interested in the history of Kol Nidrie, the old Jewish prayer that survived till now thanks to the glorious melody that serves as its foundation,” said Podgaits. “It is not an accident that both the prayer and the melody attracted such composers as Max Bruch and Arnold Schonberg.”

Podgaits is one of Russia’s most distinguished living composers, with 12 operas, three symphonies and
27 concertos to his credit. A graduate of the Moscow Conservatory, he was awarded the title of Merited Propagator of the Arts of Russia in 2000. In 2008, he won the main prize of the Bolshoi Theatre and the Union of Theatrical Figures of Russia, for his ballet, Moydodir.

ARCO Chamber Orchestra was formed in 1989 by Ambartsumian at the Moscow Tchaikovsky Conservatory. When he joined the UGA faculty in 1995, ARCO’s home base shifted to UGA as well.

Tickets  are available from the Performing Arts Center box office, by calling 706-542-4400, or online at pac.uga.edu.