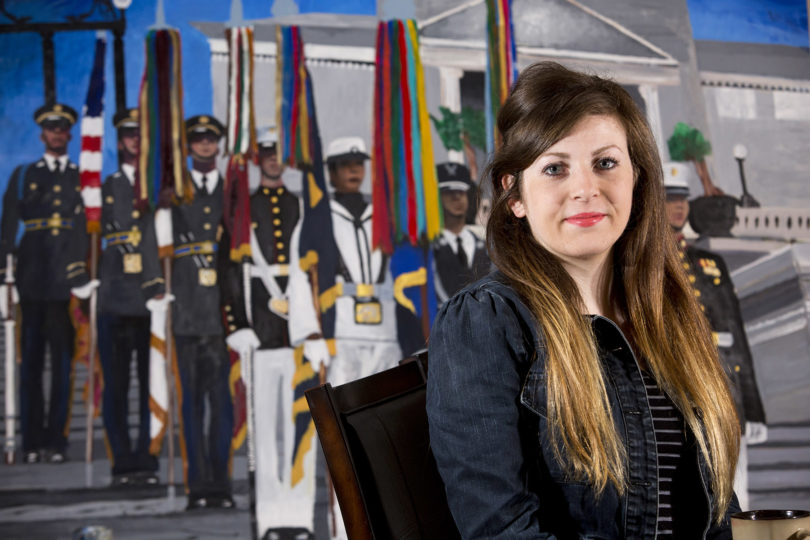 Kelly Beavers is making a habit of leaving a lasting, colorful, beautiful mark in the places she has worked.

Beavers, a senior photography major in UGA’s Lamar Dodd School of Art, has painted a student-veteran inspired mural that will go up in the Tate Student Center on Veterans Day, Nov 11. When Beavers was in the Navy, she had the chance to paint murals on a U.S. aircraft carrier.

“I left these murals in places where I worked on the ship,” she said. “I feel like I left a mark. It’s funny. Now as I’m leaving UGA, I’m doing the same thing as when I left the military. I’m leaving something behind.”

As a student veteran, the mother of a 3-year-old daughter and a full-time bartender in Winder, Beavers certainly fits the bill of a nontraditional student.

She served in the Navy from 2006-2010 stationed on the USS Harry S. Truman aircraft carrier stationed in Norfolk, Virginia. She went into the Navy undesignated, meaning she didn’t have a job title, but came out as a yeoman third-class petty officer. On the ship, Beavers performed a variety of tasks including handling the 30-ton anchor, steering the ship and performing clerical duties. Before she left, the Navy learned about her artistic talents, which gave her the opportunity to paint several murals on an aircraft carrier-not an experience your typical undergraduate art major comes to school with.

All along, Beaver’s ultimate goal was to get a college degree, but the military was its own sort of education.

“It was tough work, but it gave me a good foundation,” she said. “I dreamt of going to a good school for a long time. It just felt out of reach until I joined the military.”

With the military helping cover the cost of tuition, Beavers first went to school at the Art Institute of Atlanta before she transferred to UGA in 2013.

Growing up in Georgia, Beavers said UGA was the kind of university she used to dream about. And despite the seeming chaos of balancing school, her job and motherhood, she said, she’s loved the experience.

She credits the UGA Student Veterans Association, which gives her the opportunity to interact with others facing the same balancing act, and the Student Veterans Resource Center for helping make it manageable.

As she prepares to graduate in the spring, Beavers has been working with SVRC director Ted Barco to develop a plan for her next step. She’s considering art education as a career option.

But in recent weeks, one of her biggest preoccupations has been the student veterans’ mural. In the months she’s been painting it, the 4- by 5-foot canvas has been taking up real estate in her living room. The painting, which will hang outside the First Data Student Veterans Lounge, depicts veterans from all branches of the military before a backdrop of recognizable UGA landmarks.

“As we observe Veterans Day, particularly the service of UGA student veterans, we are pleased to unveil a new mural to honor and thank all military personnel who served our country,” McDonald said. “We are honored to share it with our approximately 2 million visitors to the Tate Student Center on an annual basis.”

Barco said Beavers’ story and work on the mural demonstrate the diversity of experience among student veterans.

“Each of our student veterans brings a special talent to the table,” Barco said. “However, Kelly is uniquely blessed with the ability to share that talent on canvas for all of us to see.”