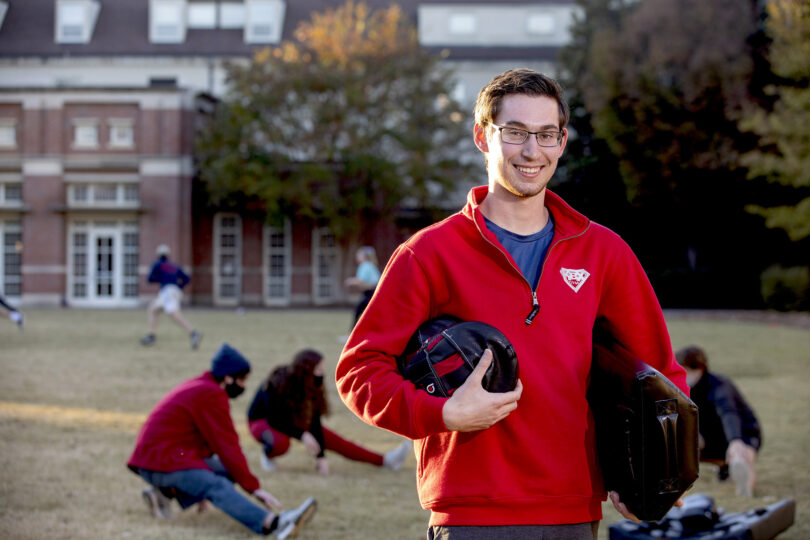 A black belt and former state champion in Taekwondo, Miller is president and one of the founders of the University of Georgia Krav Maga club. He teaches students practical martial arts and self-defense—outdoors and socially distant.

Krav Maga is a self-defense system that originated in Israel that incorporates a mix of a lot of different martial arts: boxing, kickboxing, jiujitsu, taekwondo and karate. Miller, a senior at UGA from Cumming, started teaching Krav Maga when he was in high school—first kid’s classes and then as he moved up in the sport, adult classes. At UGA, Krav Maga wasn’t offered. He saw a gap and wanted to help teach his fellow students practical self-defense. “It’s useful for anyone looking to learn self-defense. Unlike many other martial arts, where you might have to have a lot of strength to do the techniques, Krav Maga doesn’t require that. If you have a bigger opponent or attacker, you can defend successfully against them.”

And one bonus of martial arts is that it’s a boost in self-confidence and self-awareness when out in public.

“I think just by knowing some basic self-defense techniques, you can really increase your self-confidence when you are walking alone to class or in an area of campus that you don’t feel safe in,” he said. “Just having that knowledge in the back of your head, knowing some self-defense techniques can instill confidence in yourself. And also self-awareness, because if you’re aware of your surroundings, that’s key in preventing a self-defense situation from arising.” 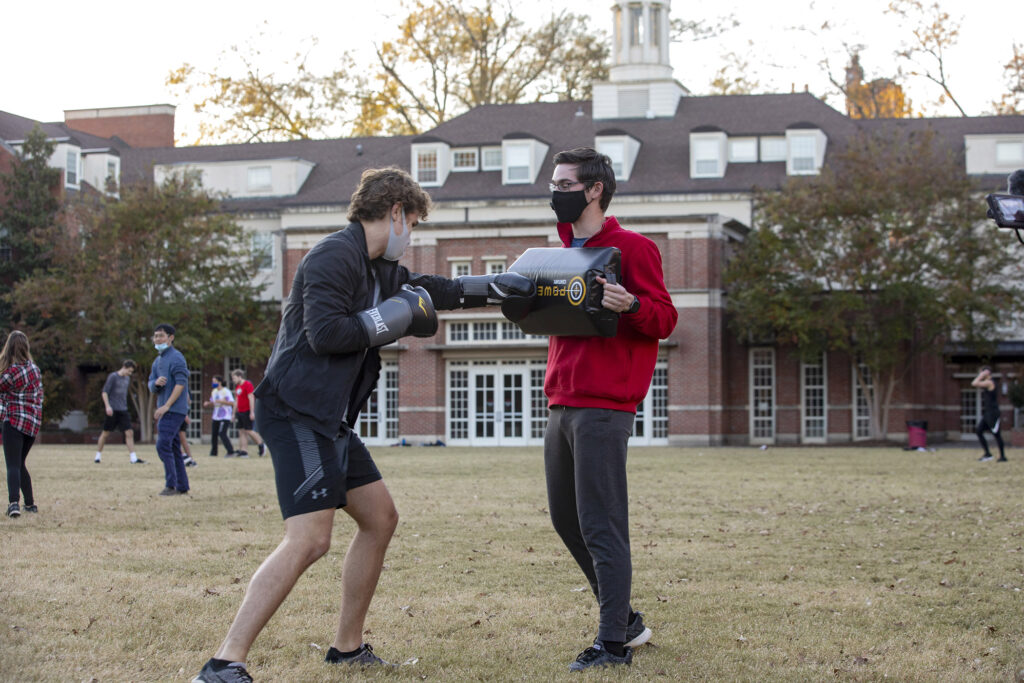 Operating the club in a pandemic has been a challenge. The club’s board considered online classes but decided it was important to offer the classes in-person.

“A lot of people right now don’t feel comfortable going to the gym. And they may not be getting the exercise that they normally get,” he said. “That’s one thing that I think is going to be a long-lasting effect of this pandemic—health issues that come with people not being able to get the regular exercise they normally get. That was one factor that drove our decision to have in-person classes.”

Krav Maga classes are offered every other week on Myers Quad—outside in the open air. Participants wear masks throughout the class and bring a partner they’re already in close contact with, whether that’s a friend or a roommate. With help from fellow cofounder, Thomas Bagwell, participants practice techniques—from choke defenses to knee strikes—with partners while staying 6 feet away from the instructors and other participants. 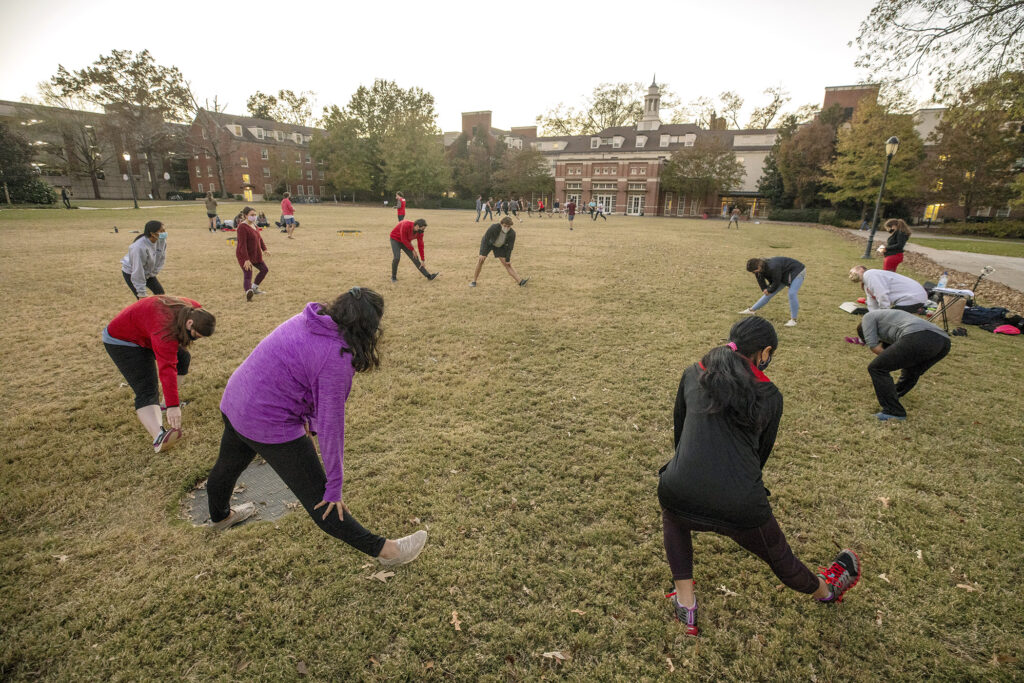 Classes start with stretches, then move to some boxing-related techniques: punches, kicks and kickboxing. Miller will teach how to defend from wrist grabs or punches. The class will add pads for practicing hitting.

“As we go through the class, we up the speed and the intensity. Once we get to the very end of the class, I like to tie everything back together to simulate a real-life situation. The boxing technique that I was doing earlier, or the choking technique that we just learned. That way you can really start to instill muscle memory for all these techniques.” 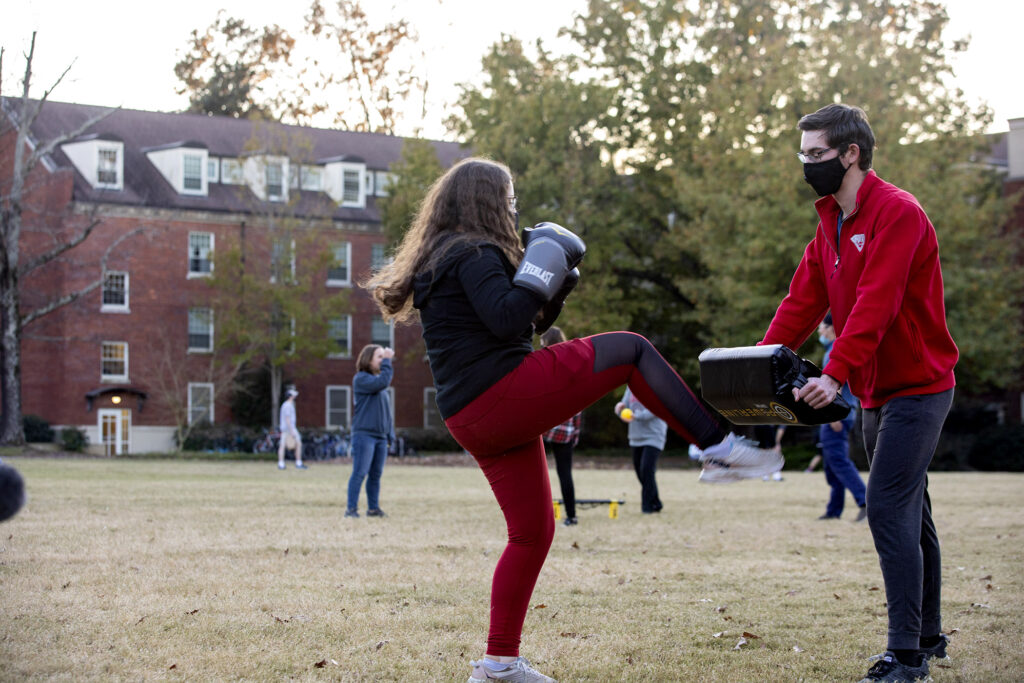 Up next: medical school

But Krav Maga isn’t all Miller does at UGA.

A pre-med student, Miller is narrowing down his selections to start medical school in the fall.

And while Krav Maga isn’t technically connected to his career goals, the common thread is teaching. It’s part of what drew him to medicine.

“I enjoy teaching others what I know. Specifically, the way some physicians are able to do that with their patients,” he said. “I think being able to speak to a patient in a manner that is very clear and down to earth simplifies the science for them in a way that patients will understand, will find interesting—will instill confidence in their treatment plan and their trust in the physician. I think that aspect of the patient-physician relationship is very important. That really draws me to medicine.”

He’s shadowed physicians both while in high school and at UGA, and it’s helped him solidify his career path.

He works in UGA’s Rada lab, where researchers look at an immune cell crucial in cystic fibrosis. He’s presented his Rada lab research to UGA’s CURO symposium. Volunteering with the Emory Clinical Cardiovascular Research Institute, he’s worked on a team that has had had two papers published on cardiovascular adaptations in athletes. And research is something he hopes to continue throughout his medical career. 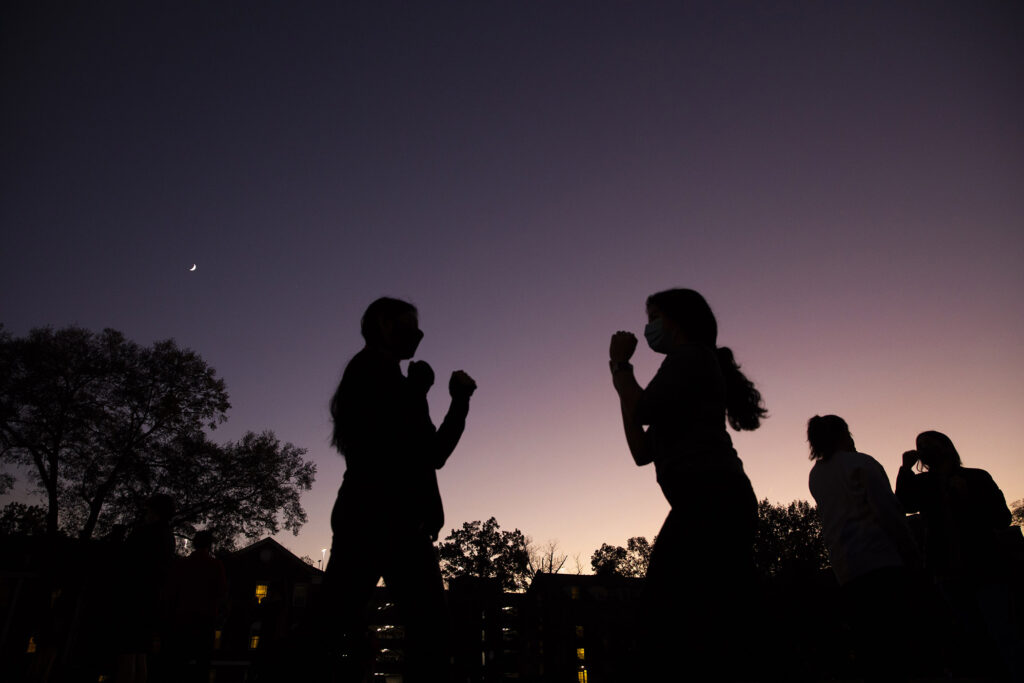 And for when he’s studying for finals, he says Krav Maga is a way to get some exercise in and is a great stress relief and way to relax after a long day.

His one regret is not starting the club sooner—for his first two years at UGA, he thought about Krav Maga, but didn’t make it happen.

“If you want to do something, find some great people that you want to do it with and go ahead and do it. For example, starting the Krav Maga club—don’t postpone it for two years. Find people who are interested in it or want to help you, and just do it. It will be worth it.

“That applies to anything—having a fun weekend with friends, or an adventure around Athens, or taking a class you think is interesting. I took African drumming. It was really fun. Find some good friends and do it. Don’t wait.”