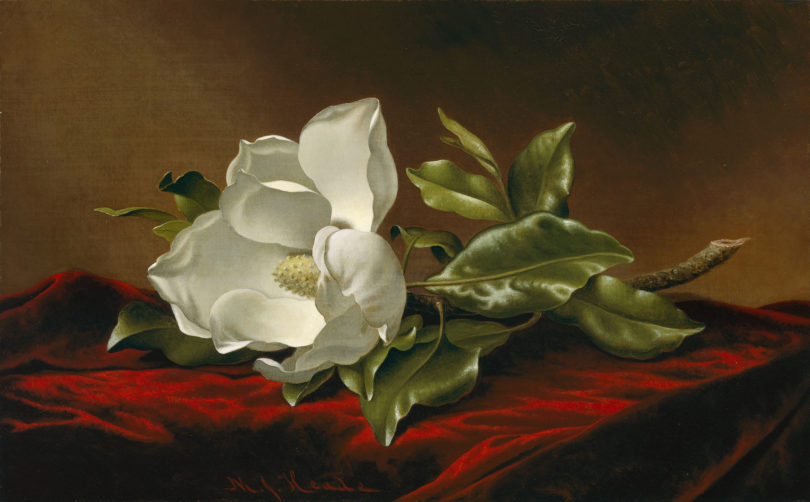 Dramatic landscapes, exotic subjects and vibrant colors all characterize the work of the once forgotten artist Martin Johnson Heade. Now recognized as one of the most important painters of the 19th century, Heade devoted equal time to landscape, marine and still-life subjects but is best known for his studies of tropical birds and flowers.

Late in his life, he wrote of his travels south, “A few years after my first appearance in this breathtaking world [1863], I was attacked by the all-absorbing hummingbird craze, and it has never left me since.” His goal was to document the birds in an illustrated publication, much like John James Audubon’s Birds of America, but he never managed to do so, although he painted more than 40 images for the project.

“This exhibition offers the museum the opportunity to closely examine Heade’s lush use of color and his meticulous attention to detail from his New England beaches to his South American hummingbirds and orchids,” said Sarah Kate Gillespie, the museum’s curator of American art.

“This exhibition also contextualizes Heade’s work amongst that of his contemporaries, allowing us to exhibit important artists we don’t have represented in our permanent collection, such as Asher B. Durand and Fitz Henry Lane,” she also said. “The conversations among these works and artists highlight Heade’s skill and accomplishment.”

Unlike many of these contemporaries, Heade was marginalized by the New York art world. For example, he was never offered membership in the National Academy of Design.

The museum has many programs related to the exhibition, including a public tour on July 19 at 2 p.m.; 90 Carlton: Summer, the museum’s quarterly reception ($5, free for members of the Friends of the Georgia Museum of Art) on July 28 at 5:30 p.m.; and a Toddler Tuesday on Aug. 8 at 10 a.m. (space is limited; email sagekincaid@uga.edu or call 706-542-0448 after July 1 to reserve a spot). All events are open free to the public unless otherwise indicated.