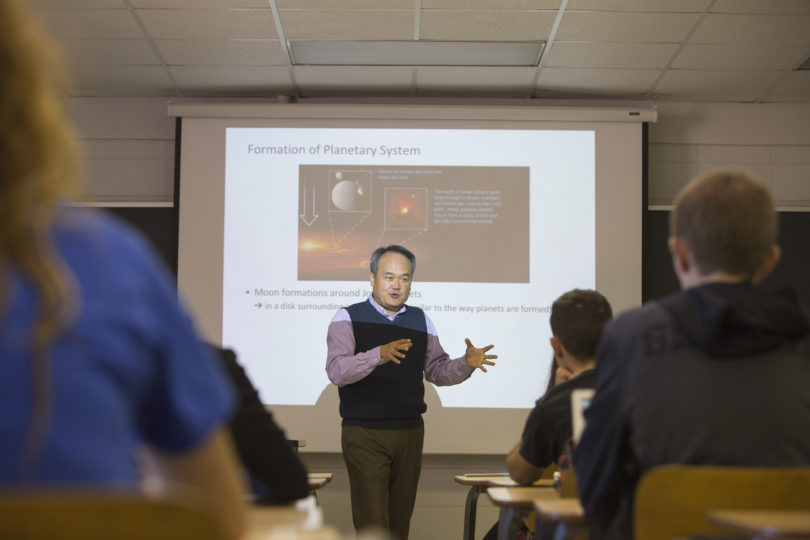 If you’ve ever looked up at the sky and wondered how our planetary system formed, you’ve got a friend in Inseok Song.

Song is an associate professor of astronomy in the Franklin College of Arts and Sciences astronomy and physics department. He teaches students about the origins of the universe, a topic he seeks answers to through his own research.

Song has been at UGA since 2008. He teaches an introductory course for nonscience majors titled Life in the Universe, an observational astronomy class for science majors and an astronomy lab that teaches students how to look at data and use computer programming to understand and seek answers to some of mankind’s biggest unanswered questions.

“Being a teacher can be so rewarding,” Song said.”I really enjoy the active engagement and discussion with the students, and I love it when students bring up a subject and look at it with a new point of view that I hadn’t thought about before. It’s a fresh eye. Normal professional astronomers don’t always think this way, so it’s enjoyable.”

Second to that, he added, there’s nothing quite like the satisfaction of a student having an aha! moment when he has introduced some new subject or knowledge in class.

When he’s not teaching, Song is busy doing research in hopes of contributing to our understanding of how planets formed around the sun in our solar system. He made headlines in August as part of a large research team of astronomers who, using direct imaging, discovered a Jupiter-like planet within a young star system.

The new planet, called 51 Eridani b, is just the first exoplanet discovered by the Gemini Planet Imager, an instrument designed specifically to detect faint young planets that are orbiting stars. The discovery was 10 years in the making, and there’s still much work to be done.

Song hopes that the research team is able to find a couple dozen exoplanets in all and then learn more about their characteristics, such as chemical composition.

After earning his doctorate in astronomy at UGA, Song worked at the UCLA NASA Astrobiology Institute as an assistant scientist and postdoctoral researcher, at the Gemini Observatory in Hawaii as an assistant astronomer and at the Spitzer Science Center at Caltech as a staff scientist.

He returned to UGA in 2008 as an assistant professor, became an associate professor in 2013 and now enjoys the added role of serving as the graduate coordinator for students in the astronomy program.

For students looking to go into the field, Song has one simple piece of advice.

“Being a good astronomer requires perseverance. I have seen many really intelligent people persevere and become superhero scientists,” he said. “But many of the astronomers that I have collaborated with, myself included, have only a modest amount of intelligence and put forth great effort.
“If a particular subject interests you, put in a lot of effort and stick with it,” he also said. “Choose the subject you’re most interested in, and the rest will follow.”