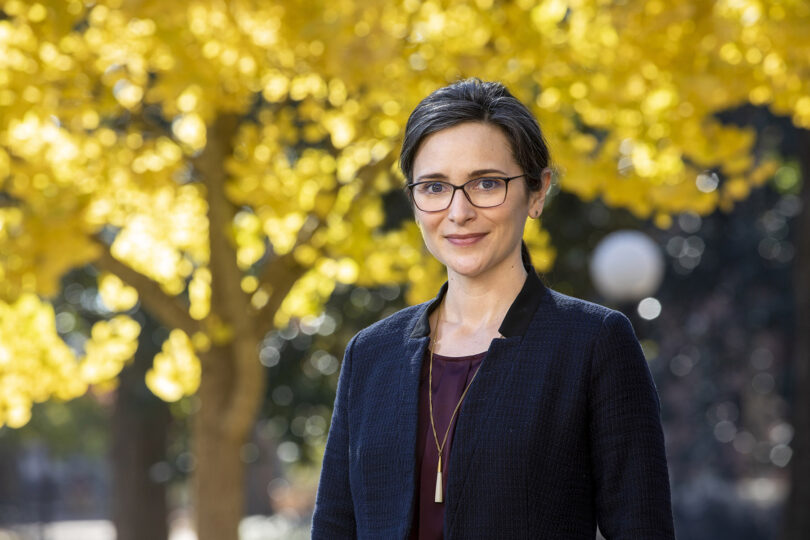 “I suppose I’ve always been interested in academia. My father was a professor. He studied Soviet Russia, and we lived in Moscow when I was very young,” Phillips Sawyer said. “While his work was focused on revolution and socialism, he and I always carried on active debates regarding the American political economy. This stoked my interest in studying capitalism and more specifically, how the United States structures and regulates markets. Despite his commitment to democratic socialism, he sent me a subscription to The Economist in high school and I’ve been reading it ever since.”

Phillips Sawyer first began teaching at UGA as a visiting faculty member while serving as an assistant professor with the Harvard Business School. Prior to joining the faculty at Harvard, she held a postdoctoral fellowship at Brown University’s Political Theory Project. 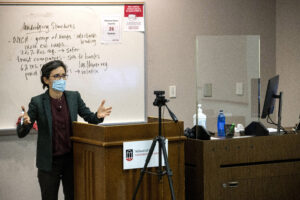 “I’ve moved around quite a bit through my career, which I think reflects the growing interest in the history of capitalism, economic regulation and market competition,” she said.

Phillips Sawyer’s husband, Logan Sawyer, is an associate professor and director of undergraduate studies at the School of Law, and after several years of working back and forth at the other’s respective universities, the two finally have landed at the same campus.

“I’ve been incredibly fortunate to have been given the opportunity to serve first as visiting faculty and then to apply for a position on the law school faculty. My husband and I adore this community, both the university and the town. This is where we want to raise our family and spend our careers. We are both from the South, and we believe strongly in dedicating our careers to educating future generations of leaders here,” she said.

Phillips Sawyer now teaches antitrust law at the School of Law. Additionally, she leads a course in international political economy at the Terry College of Business as well as an Honors seminar on U.S. financial crises.

“I love learning new things and seeing old things in a new light. Classroom discussion and debate is one of the best ways to test the articulation of a particular idea or to challenge the foundation on which an idea may be based,” she said. “It’s also true that there is a craft to writing lectures that can be equally fulfilling. A good lecture has a narrative arc that takes students on an intellectual journey and, at best, challenges them at various points in the lecture to evaluate and question the material.”

Phillips Sawyer is also a world-class scholar—with one book completed and another currently in the works—focusing on the development of American antitrust law and policy across the 20th century.

“Contrary to popular belief, antitrust law has changed dramatically over the past 100 years,” she said. Her first book, American Fair Trade: Proprietary Capitalism, Corporatism, and the ‘New Competition,’ 1890–1940 (Cambridge University Press, 2018), explores the early development of state and federal antitrust law, focusing on the era between the passage of the Sherman Antitrust Act of 1890 and the United States’ entry into World War II. She is currently working on a manuscript that is focused on recent antitrust developments.

“[My second] book explains the ascent of Chicago School law and economics, which is closely associated with free markets and deregulation. It puts into historical context the bipartisan evolution of antitrust law’s ‘consumer welfare standard’—the idea that the sole goal of antitrust law is to advance low prices and allocative efficiency,” she said.

Phillips Sawyer in recent months also revised a peer-reviewed article for Law & History Review and wrote a book chapter for a Tobin Project edited collection on anti-monopoly and American democracy.

“Studying ideas, their origins and applications, has been a lifelong passion. I can’t imagine doing anything else,” she said.