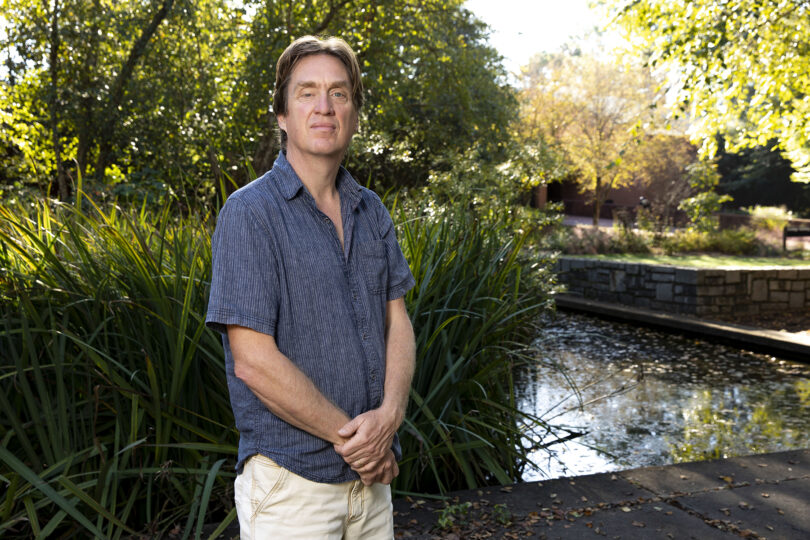 Picture a savanna: a wide open grassland, dotted with sparsely scattered trees all the way to the horizon. Savannas are found across the world in tropical, subtropical and temperate regions, and they are as varied as they are complex, including places like the Serengeti in northern Tanzania and the longleaf pine-wiregrass systems of the southeastern U.S.

Ricardo Holdo, an associate professor in the Odum School of Ecology, studies savannas and the many forces that shape them. While his focus is chiefly on the structure and composition of the trees and grasses, for Holdo it all started with elephants.

He became fascinated with the creatures while working as a tour guide at a wildlife park in southern Africa soon after graduating from college. When he went on to pursue a master’s degree, he convinced his advisor to let him do his thesis on elephant nutritional ecology in Zimbabwe.

“Working on elephants inevitably got me interested in trees, because trees in elephant habitats put up with a lot of abuse,” he said. “That attracted me to understanding how trees cope with disturbance in savannas.”

His current projects include a National Science Foundation-funded study of how variation in rainfall affects savanna structure in South Africa. It’s a question with more than academic significance.

“We know that increasing rainfall seems to lead to woodier savannas, but we’re not sure why,” Holdo said. “Woody encroachment is a widespread phenomenon that leads to loss of grazing resources, and that’s a problem not just in south Saharan Africa but in the U.S. Southwest as well. Increases or declines in woody cover have implications for peoples’ livelihoods and for biodiversity.”

Holdo and his students are conducting a large-scale manipulative experiment to understand how trees and grasses respond to different patterns of increased rainfall. Because that response depends on functional traits—things like rooting depth, drought tolerance and maximum transpiration capacity—they are measuring the ecophysiological traits of trees and grasses in the lab and the field. They couple that with experimental simulations of different rainfall regimes and are developing predictive models of how vegetation will respond to that variabil­ity.

Holdo uses his research to inform his teaching. For his graduate courses on modeling and statistics, he draws on his study systems and his experience in modeling savanna dynamics.

“In the past I’ve done a lot of work on animal population dynamics and movement,” he said. “My students get a little sick of hearing about Serengeti wildebeest, I’m sure.”

Beyond his research and teaching, Holdo is committed to making sure the Odum School is a welcoming place for students, faculty and staff from underrepresented groups.

Soon after arriving at UGA in 2016, Holdo joined the Odum School’s Diversity Committee—now the Diversity, Equity and Inclusion Committee—and is currently serving as its chair. The committee has been leading the Odum School through the development of an action plan to address racial injustice.

Finally, Holdo is interested in providing substantive opportunities for undergraduate researchers. He is preparing a Maymester field course in South Africa, due to be offered in 2022.

“I currently have two students, Isabel Wargowsky and Nikki Gajjar, both supported by UGA Center for Undergraduate Research Opportunities, who are actively doing research in my lab,” he said. “Anabelle Barr, who graduated last year, did a senior Honors thesis. Others have worked in the lab for shorter periods. And there’s always room for more.”