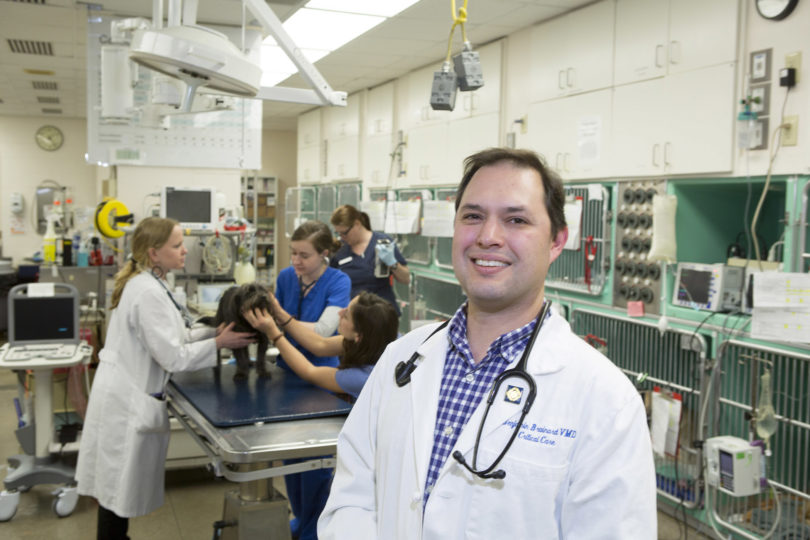 Dr. Ben Brainard possesses a penchant for challenges and real-time physiology in crisis.

On a near-daily basis in his role as an associate professor of emergency and critical care medicine at the UGA College of Veterinary Medicine, Brainard works at the vortex of life and death.

His naturally calm demeanor is an asset amid the chaos of caring for patients in crisis. It sets the tone for keeping the interns, residents and fourth-year veterinary students under his tutelage, as well as the veterinary technicians who assist them, focused on the sickest patient of the moment.

Brainard is one of two clinicians who co-created and co-directs the UGA Veterinary Teaching Hospital’s emergency and critical care service. When he is on the clinic floor, Brainard is the veterinarian in charge of both the Small Animal Emergency Room and the Small Animal Intensive Care Unit. He possesses two board certifications in two of the most challenging areas of medicine: emergency/critical care and anesthesia.

“My main interest is in physiology, in terms of understanding how the different body systems work to maintain oxygen and profusion to the tissues,” he said, noting that in a laboratory, you may study one system at a time, but in his typical setting “there is so much interaction with all the organ systems of the body that you have to take a much larger view of everything. The clinical applications of physiology are intriguing and what’s best about anesthesia and critical care is you tend to see the extremes of physiology.”

Brainard didn’t grow up with pets, so it was his love of science and its never-ending questions that lured him into his career. After receiving his veterinary degree at the University of Pennsylvania, he did what many of his students do: He entered a yearlong small animal rotating internship, where he worked in a hospital on all the services. He did his internship at UGA.

A rigorous five-year dual residency training program at the University of Pennsylvania came next, a program for which, he said, he was better prepared to tackle, thanks to his strenuous year at UGA. Penn’s SVM is known for having one of the busiest emergency rooms and highest caseloads of all veterinary teaching hospitals. Brainard’s pursuit of an anesthesia specialty provided him with the added benefit of working with multiple species—even humans, thanks to a rotation at a human hospital.

“With anesthesia, you have to be able to anesthetize anything put in front of you, from sea horses to gorillas to horses,” he said. “The real benefit of it was the exposure and having to think in a truly comparative physiological sense, as you have to know the idiosyncrasies of every species you anesthetize. It’s helpful to have this background. We do anesthesia every day in critical care.”

As he neared the end of his residency and realized he wanted a future in teaching and conducting research, Brainard applied to become a clinical instructor of critical care medicine at the veterinary medicine college and helped launch the hospital’s emergency and critical care service for small animals.

A decade later, his services are located at the new Veterinary Medical Center and have expanded to two rooms. Over the last two fiscal years, he said, the caseload for the service has grown by 50 percent (30 percent in the last fiscal year), and they now average about
411 cases per month.

When Brainard’s not working in the hospital, he’s likely working on research. His specific areas of interest are pain management in ICU patients, long-term ventilation, and disorders involving coagulation and platelet function. He recently received a $180,000 award from the Morris Animal Foundation—a significant award for a clinical study of a feline disorder—for a three-year multi-center study to evaluate two drugs in the treatment of cats with recurring arterial thromboembolism.

Brainard credits his time at Penn with providing him a strong research background.

“All discussions then were based on, ‘This is what we know. What can we do to change the parameters?’ ” he said.

It’s a methodology he strives to impart to his own students. Brainard believes research and dealing with patients go hand-in-hand.

“This is why it’s important to have a teaching hospital at a veterinary school, as what you see makes people think about new approaches and new ways around problems,” he said. “Without one, you can’t have the other.”