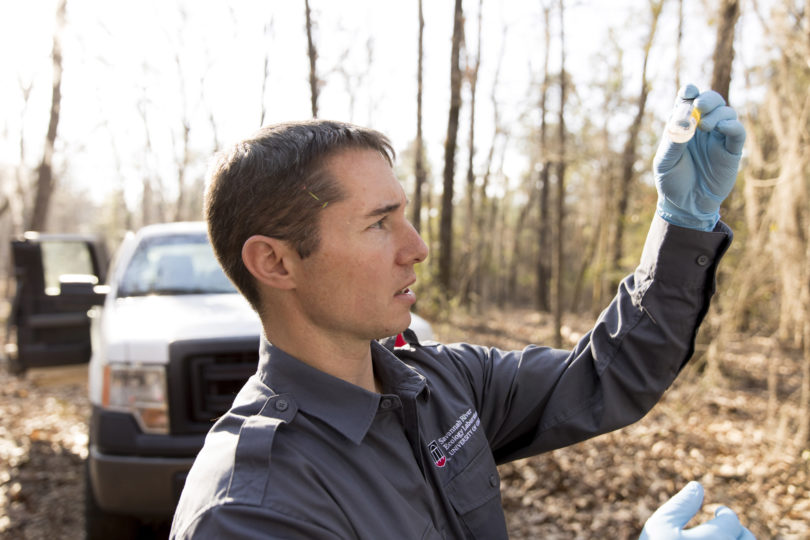 Although James Beasley is based at the Savannah River Site near Aiken, South Carolina, he travels to foreign countries where he supervises teams of graduate students as they conduct field research. (Photo credit: Andrew Davis Tucker)

In teaching the concepts of wildlife ecology, James Beasley covers a lot of ground both literally and figuratively. 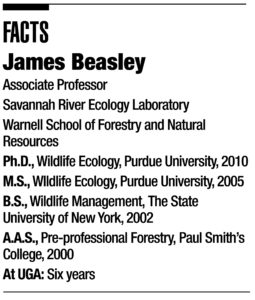 Based at the U.S. Department of Energy’s 310-square-mile Savannah River Site near Aiken, South Carolina, Beasley gives advanced hands-on instruction to students investigating the conditions of wildlife and their behavior.

“I spend a lot of time in the field mentoring students,” said Beasley, who also is a faculty member in the Warnell School of Forestry and Natural Resources. “Handling large mammals requires a great deal of oversight and training in trapping techniques, administering anesthetics and handling animals after capture.”

Currently, he teaches an online class in basic wildlife ecology for nonmajors and a Maymester class that exposes students to lab and field work on the SRS.

He balances teaching at the SRS with travel to foreign landscapes where he investigates the effects of radiation fallout on wildlife.

Beasley supervises individual teams of graduate students who conduct research in the field in Fukushima, Japan, and in the Chernobyl Exclusion Zone.

The research in Chernobyl is conducted in an 834-square-mile ecological reserve in Belarus. Students study population dynamics, movements and health of large mammals, including gray wolves. As part of this research, Beasley helped develop a tool that combines an electronic dosimeter with a GPS tracking collar. It can capture an animal’s movement and exposure to radiation in close to real time.

Despite the presence of radioactive chemicals on the landscape, Beasley’s team determined that abundant populations of wildlife exist in the CEZ. He cautioned that the results of the study do not necessarily indicate that these wildlife are healthy.

“It opens our eyes to the effect of humans on large mammals—deer, moose and wolves,” said Beasley. “It is an extreme example, but it brings to light that human presence on a landscape disrupts the natural environment.”

Beasley began the studies in Japan after he was asked to serve as the International Atomic Energy Agency’s wildlife adviser to the Fukushima Prefecture government in 2014.

“In Fukushima, we work throughout the human exclusion zone as well as a large, surrounding control area inhabited by people,” Beasley said.

Although his research studying radioactive elements in the environment has garnered much attention, Beasley is quick to point out that other areas of his research are equally important.

His expertise in this area is evident. He heads a national subcommittee that developed recommendations for managing the invasive wild pig population.

During his time at UGA, Beasley has quickly risen from an assistant research scientist to a tenured position. This achievement came on the heels of him being named the 2018 Fred C. Davison Early Career Scholar. The award is given to an individual who has demonstrated outstanding accomplishment and in short, demonstrates the potential for achieving future success.

“I knew that I wanted to work outside in either forestry, fisheries or wildlife because I grew up in the country hiking, fishing and hunting,” Beasley said. “I’ve always been drawn to the outdoors.”

Prior to coming to UGA, Beasley was a visiting assistant professor at Purdue University. When asked if he prefers research or teaching, Beasley said he enjoys both.

“That’s why I am at a school like Georgia,” Beasley said. “In fact, most of my research is done with graduate students, so mentoring, which I
view as teaching, is a big part of that research. I suppose you can say that I am ­passionate about experiential learning.”