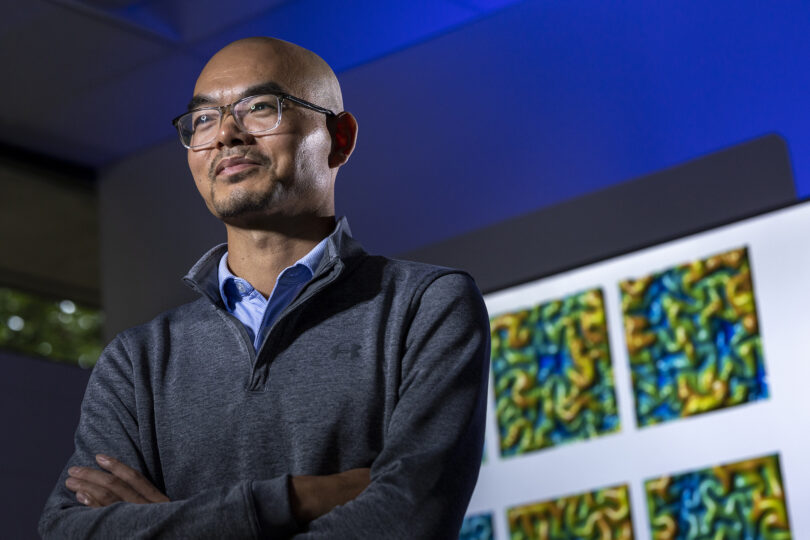 XianQiao Wang is an associate professor of computational mechanics in the College of Engineering. (Photo by Dorothy Kozlowski/UGA)

XQ Wang is working to reverse-engineer the brain

We’ve all seen images of the human brain—those telltale folds of soft tissue filled with neurons, other cells and blood vessels. We typically assume that the brain’s shape has little relation to what goes on inside it. But what if how this complex organ is structured informs how it functions? Can the brain’s folding patterns provide clues about brain health and brain disease, from fetal stage through old age and back again?

These are some of the questions XQ Wang, associate professor of computational mechanics in the College of Engineering, is asking.

Trained as a mechanical engineer with expertise in multi-skill computational modeling simulations and machine learning, Wang began his research career working with nanomaterials related to modeling simulations. “I wasn’t thinking about the brain back then,” he said. But a Thanksgiving retreat with a group of UGA faculty at a friend’s house changed his direction.

Over turkey and mashed potatoes, Wang began a conversation with Tianming Liu, professor of computer science in the new School of Computing. Liu was working on an imaging study of brain structure and function and wanted Wang’s thoughts on the mechanics of brain development. Together, they began imagining an audacious project: Could they engineer a brain model or simulation capable of explaining how the brain forms and develops?

“The question became, is there any way to simulate how the brain develops from fetal stage to adulthood?” Wang said. “And are there special structures in the brain that are relevant to brain disorders? That’s how our work started.”

The results of their collaboration speak for themselves. In a pioneering discovery, Wang and Liu developed the notion of “hinges” within cortical folding. They focused especially on the pattern they call the three-hinge gyri, a conjunction of cortical folds coming from three directions.

The three hinges aren’t just structurally important. They’re also functionally important, though much remains to be learned about their specific role. “They could be acting as hubs,” said Wang, “almost like airport hubs across the United States that communicate with each other, with specific brain functions potentially attached to specific hubs.”

Their work has important implications for neuroscience, suggesting that it’s important to study brain regularity—or the ways in which human brains are alike—and not just brain variability. Their modeling also has downstream clinical implications. If machine learning can be used to develop algorithms capable of tracking how the human brain typically develops, that information could allow researchers to pinpoint with greater accuracy those instances where development veers off course. Potentially, this information could help clinicians intervene sooner in the presence of life-altering conditions, from autism to Alzheimer’s disease.

With these aims in mind, Wang and his research team have launched a new project in collaboration with Liu as well as researchers from the University of North Carolina-Chapel Hill. Their aim? To reverse-engineer the brain—that is, to simulate brain development in reverse, from the aged brain all the way back to its fetal structure.

“Let’s say I know someone who has schizophrenia,” Wang said. “Can we reverse that disease process through simulations to know what their brain was like at fetal stage, what it looked like? If we can know earlier that there are potential problems in a person’s brain development, then maybe we can take preventive steps or intervene at a much younger age.”

Reverse-engineering is a massive undertaking, one that pushes the boundaries of neuroscience and machine learning. The project could take up to a decade, Wang said. But the potential benefits of a powerful new model for understanding brain development are worth the effort.

Wang joined the UGA faculty in 2012 after completing doctoral studies at George Washington University. Today, when he’s not in the lab or the classroom, he spends time playing sports with his son and immersing himself in the vibrant college town of Athens. He’s proud of his work mentoring graduate students in his simulation lab, and in the classroom, he introduces undergraduate students to the wide range of applications that computational modeling and simulation can have. In his classes, students learn that it’s OK to ask hard questions. Wang has spent much of his life doing the same.

“At the very beginning, I wasn’t sure if a mechanical model could really explain something in brain science,” he said. “The brain is so complicated! I hoped so, but I didn’t know.” Today, he’s no longer wondering. He’s too busy asking what computational modeling applied to neuroscience can accomplish. “This is a pioneering field,” he said. “I’m very excited about our capacity to help intervene and maybe even prevent brain conditions in the future.”