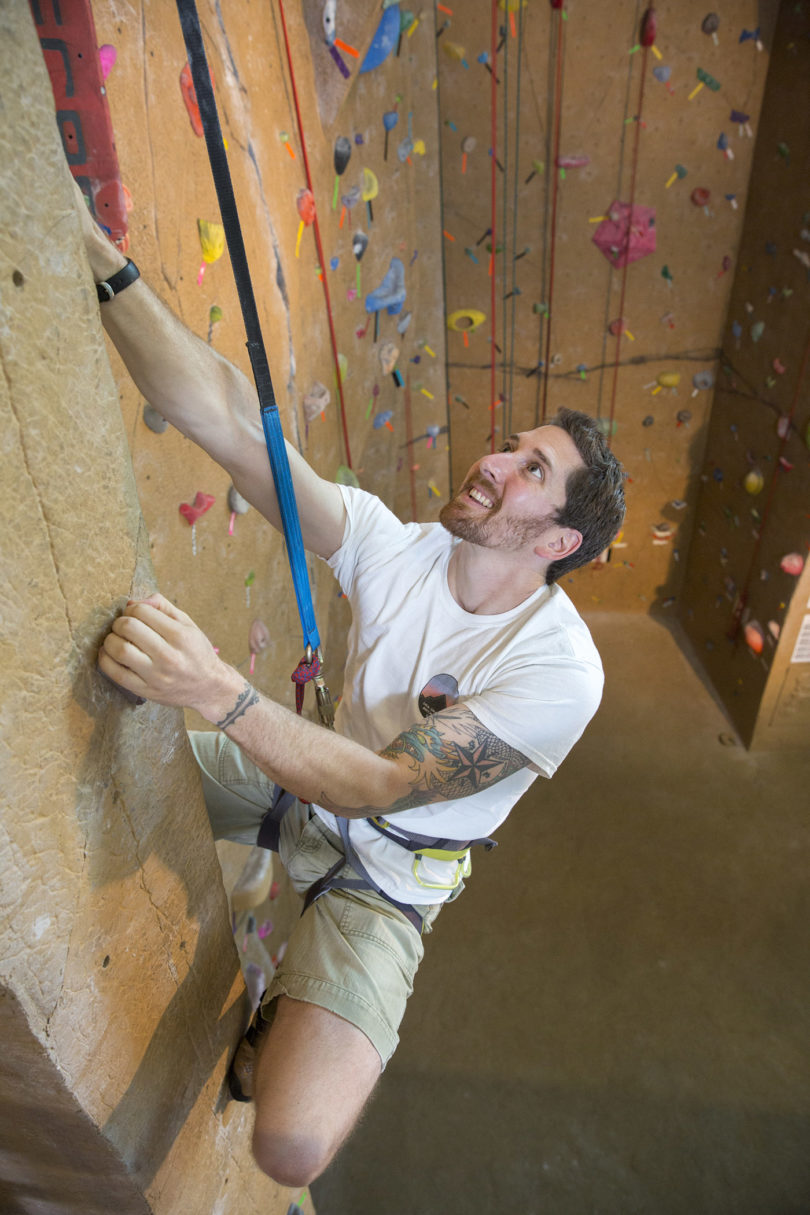 After becoming friends with the climbing wall staff during his undergraduate days at Texas A&M University, Haynie took to the outdoors and started to go on climbing and other recreational trips. Later on, he was a river guide and taught climbing courses.

Now, as associate director for programs in the Department of Recreational Sports, Haynie is helping mold UGA students into leaders who can inspire in others that same pleasure in the outdoors and recreational activities.

“I took advantage of the opportunities that were before me and walked through the doors that opened up,” Haynie said. “What I’m doing here is I’m creating other stewards who will go spread that word and philosophy of an alternative healthy lifestyle.”

In his position, Haynie oversees intramural sports, club sports as well as the fitness and wellness arm of the Department of Recreational Sports, which is part of the Division of Student Affairs. Previously, Haynie was assistant director for outdoor recreation.

Since arriving at UGA in 2012, Haynie has been focused on teaching student workers and making sure they have the proper training.

“Since we have so many students running our programs, I have to ensure they’re empowered, trained well and knowledgeable enough to be an effective steward of what we’re trying to do,” Haynie said.

Haynie said he gets a lot of satisfaction out of working with students and seeing them progress.

Haynie also has worked with other areas across campus to encourage the exploration of recreational activities and the outdoors. In May 2013, he led a study-abroad trip in Costa Rica. In June 2014, he worked with the Honors Interdisciplinary Field Program to teach students outdoor skills during one leg of their eight-week trip through the western U.S.

“What I really love is seeing young peoples’ faces as I’m teaching or showing them a new skill and they get it,” he said.

While he was introduced to hunting and fishing at a young age, Haynie didn’t begin to fully appreciate the outdoors or activity sports until college. When he began looking for a job after college, he realized university recreation was aligned with his personal ideals. That led him to the University of Alabama’s outdoor recreation program.

“While I didn’t have the student affairs background, I had the relevant work history, all that technical working knowledge and a desire to pay it forward to other young people,” Haynie said. “Paying things forward and providing opportunities for young people to develop and learn about themselves definitely are at the core of the Division of Student Affairs and what we’re doing here.”

Haynie also hopes that the UGA students interacting with the Department of Recreational Sports learn to better appreciate an active lifestyle and maybe even enjoy the outdoors, just as he did at Texas A&M.

“For me, this all started by just enjoying the experience of being outside and being away from sources of stress,” he said. “I really believe the outdoors is not only a place for growth and development, but it also has restorative and therapeutic values.”