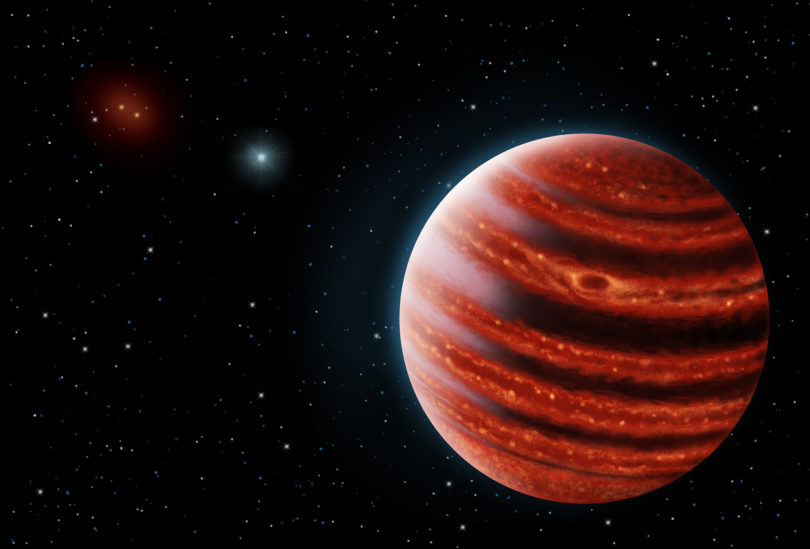 Athens, Ga. – A team of astronomers that includes University of Georgia professor Inseok Song has discovered a Jupiter-like planet within a young star system that could serve as a decoder ring for understanding how planets formed around the sun.

The new planet, called 51 Eridani b, is the first exoplanet discovered by the Gemini Planet Imager, a new instrument operated by an international collaboration headed by Bruce Macintosh, a professor of physics in the Kavli Institute at Stanford University. It is the faintest exoplanet on record and also shows the strongest methane signature ever detected on an alien planet, which should yield additional clues as to how the planet formed.

The results were published in the current issue of Science and describe the first major discovery from more than 10 years of collective efforts by more than 50 researchers.

The Gemini Planet Imager was designed specifically for discovering and analyzing faint, young planets orbiting stars. After GPI was installed on the 26-foot Gemini South Telescope in Chile, the team set out to look for planets orbiting young stars. They’ve looked at almost a hundred stars so far.

“This is exactly the kind of planet we envisioned discovering when we designed GPI,” said James Graham, professor at the University of California, Berkeley and project scientist for GPI.

Once the astronomers zeroed in on the star, they blocked its light and spotted 51 Eridani b orbiting a little farther away from its parent star than Saturn does from the sun. Even though the light from the planet is very faint—nearly a million times fainter than its star—subsequent observations revealed that it is roughly twice the mass of Jupiter.

In addition to being the faintest planet ever imaged, it’s also the coldest—800 degrees Fahrenheit, whereas others are around 1,200 degrees—and features the strongest atmospheric methane signal on record. Previous Jupiter-like exoplanets have shown only faint traces of methane, far different from the heavy methane atmospheres of the gas giants in this solar system.

All of these characteristics, the researchers say, point to a planet that is very much what models suggest Jupiter was like in its infancy.

In addition to expanding the universe of known planets, GPI will provide key clues as to how solar systems form.

The gas giants in this solar system formed by building up a large core over a few million years and then pulling in a huge amount of hydrogen and other gasses to form an atmosphere. But Jupiter-like exoplanets that have been discovered so far are much hotter than models have predicted, hinting that they could have formed much faster as material collapses quickly to make a very hot planet.

“This discovery is one of many imaging detections of exoplanets to come in the next few years,” said Song, an associate professor in the department of physics and astronomy in the UGA Franklin College of Arts and Sciences and co-principal investigator on the GPI exoplanet survey team. “Unlike most of the currently known confirmed exoplanets, these GPI images of exoplanets allow us to examine planetary atmospheric information, which will eventually allow astronomers to examine biosignatures from mature planets during the next decade.”

The study is available at www.sciencemag.org/lookup/doi/10.1126/science.aac5891.