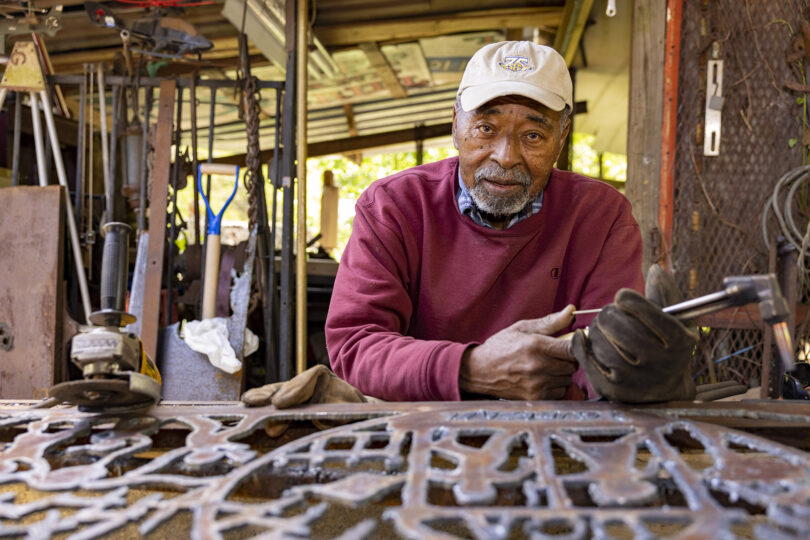 A portion of the funds from the Presidential Task Force on Race, Ethnicity and Community funded the project

Renowned artist and Athens native Harold Rittenberry Jr. was there the day Charlayne Hunter (now Hunter-Gault) and Hamilton Holmes arrived at the University of Georgia. He had just left his girlfriend’s house on the east side of Athens and was walking through downtown when he saw two vehicles pull up in front of the Arch with an unruly crowd pressing in on the cars.

“I came home and turned the TV on and found out what I’d just seen: They had just integrated the University of Georgia,” Rittenberry said. 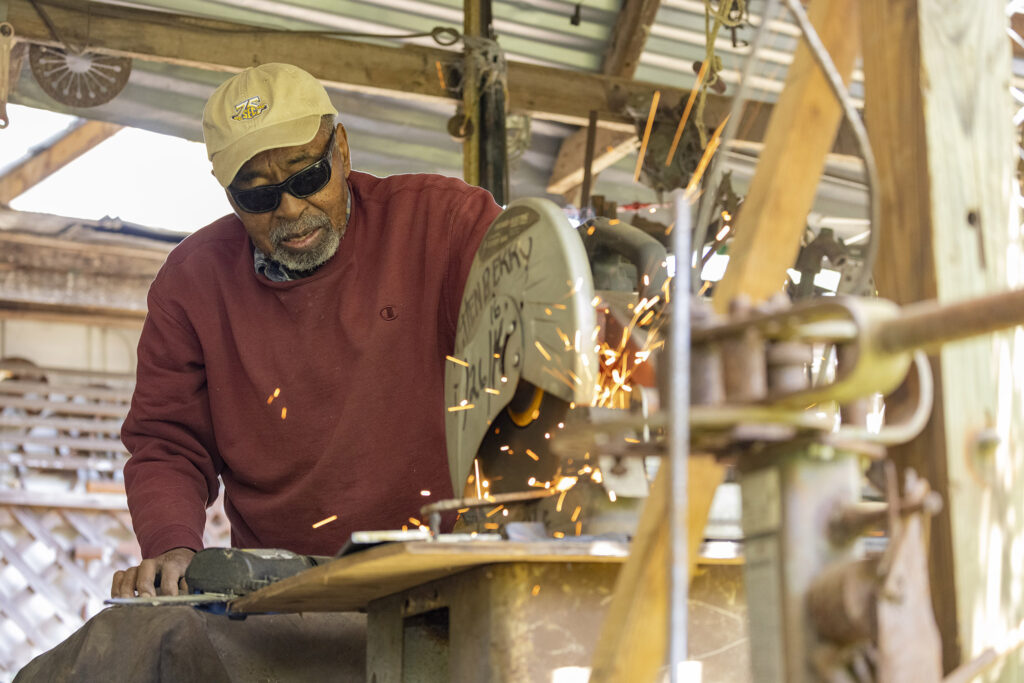 UGA President Jere W. Morehead commissioned Rittenberry to create two benches in honor of Hunter-Gault and Holmes to be included in a restored courtyard that pays tribute to the UGA icons outside of the historic Holmes-Hunter Academic Building after it has been fully renovated.

In addition to restoring the courtyard, the planned renovation will install an elevator and new stairs; integrate new mechanical, electrical and plumbing systems; optimize use of the building’s square footage; showcase the cast iron in the structure; and create a classroom from the original building design.

The $30 million project was approved by the University System of Georgia Board of Regents in November 2021 and is supported by a $15 million gift from the Robert W. Woodruff Foundation. The project is currently in the design phase, and construction is scheduled to begin in January 2023. 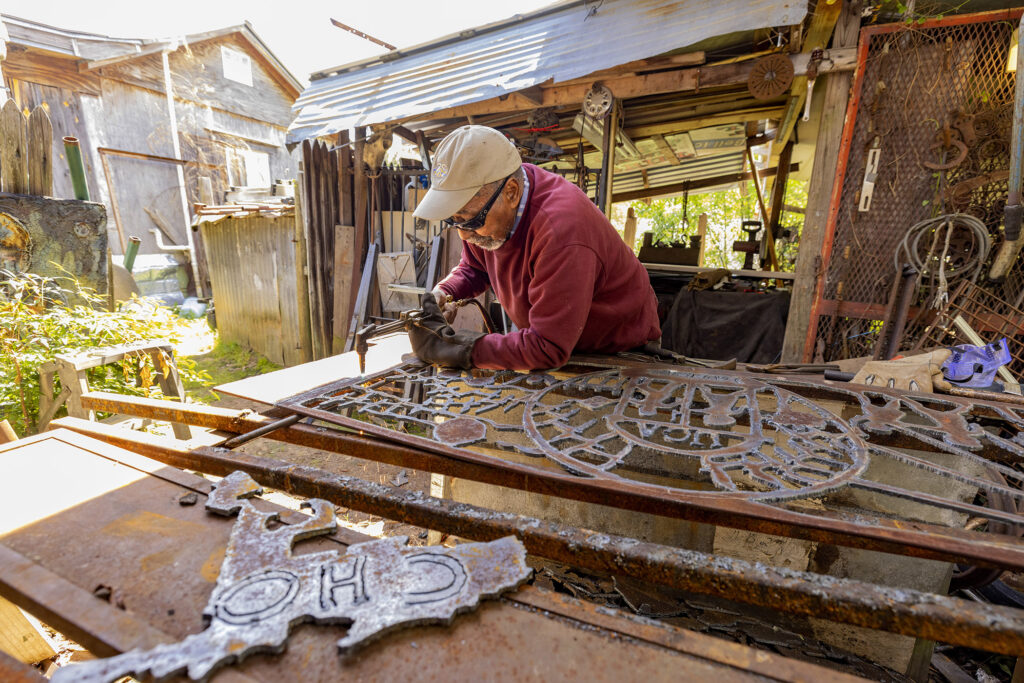 “I am excited that Mr. Rittenberry’s extraordinary work will be incorporated into this important project,” said Morehead. “Not only is he incredibly talented, but as a contemporary of Charlayne Hunter-Gault and Hamilton Holmes, his contributions are especially relevant and appreciated.”

Rittenberry said he was honored. “Since I knew what happened and was there that day, I put that inspiration into the benches.”

The steel benches are now complete, but Rittenberry said he built them once, then tore them down and rebuilt them, and he’s still not entirely satisfied. But that’s not unusual for him. “When they begin to rust, they’ll look a whole lot better,” he said. 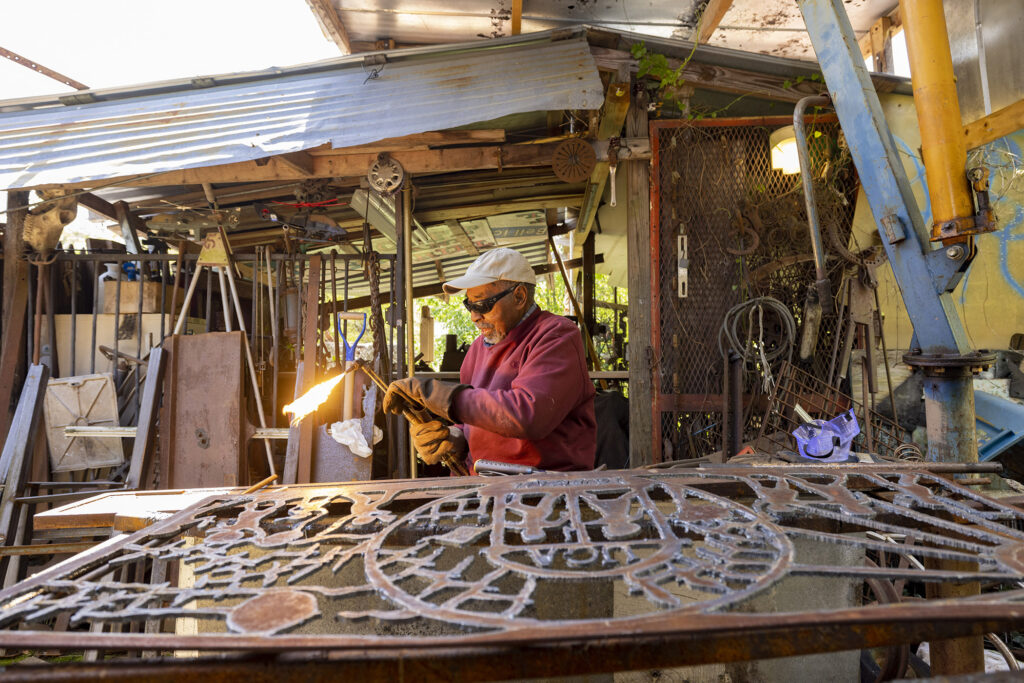 Rittenberry has always loved drawing and art, and talent runs in his family. His grandfather wove baskets, and his grandmother made quilts and brooms. His father was a mason and built the family home, which Rittenberry still lives in today. In grade school, the teachers used to ask him to chalk holiday scenes on the blackboard. “I could draw a great Santa Claus and reindeer and a good Easter bunny, but I wasn’t very good at Thanksgiving scenes,” he laughed.

When Rittenberry was in his early 50s, his mother developed Alzheimer’s, and he and his sister took turns caring for her. Since Rittenberry had a lawnmower business at home, he watched her during the day. When he saw a cutting torch advertised in the Sears catalog, he bought it on a whim to keep himself occupied, and after a lot of trial and error, began making sculptures. His yard soon filled up with his work. 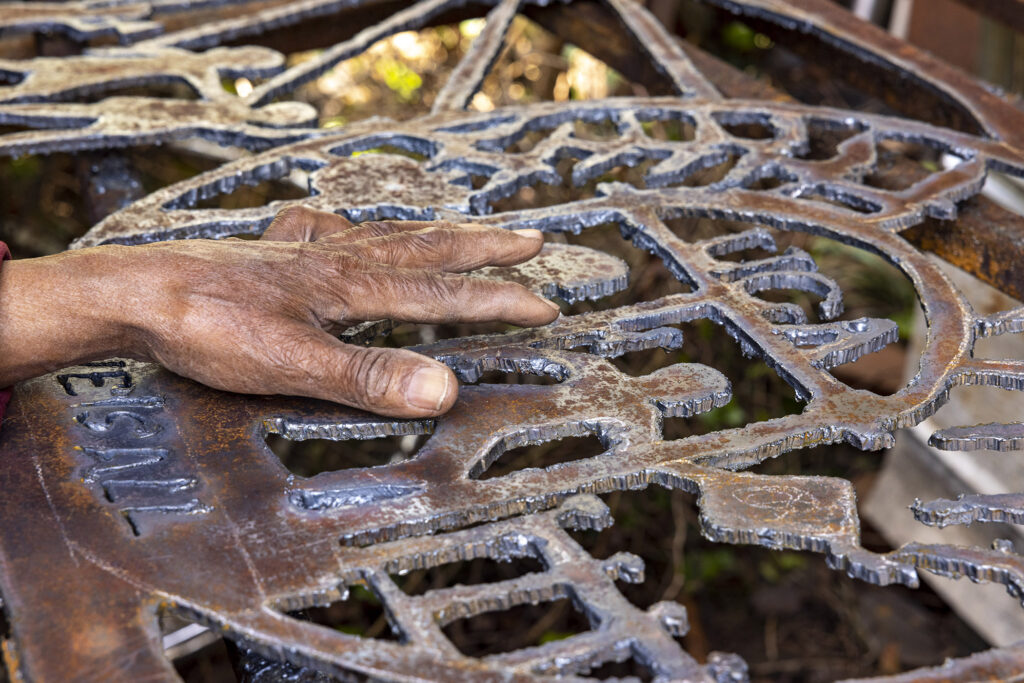 Rittenberry’s hand rests on the bench he created for the Holmes-Hunter Academic Building, depicting silhouettes of Charlayne Hunter and Hamilton Holmes under the Arch. (Photo by Dorothy Kozlowski/UGA)

“It was a tough time because my mother was sick, and I hated to see her down like that. Art was the only thing that kept me going,” he said.

Soon, art was also bringing in money. One day, a stranger knocked on his door and offered to buy some of his sculptures. The stranger picked out six pieces and gave Rittenberry $2,000 for them. Two weeks later he was back and bought six more, this time for $4,000. The man invited Rittenberry to show his art at a folk art festival in Atlanta. “By noon, I didn’t have any sculptures left and more money in my pocket than I’d ever had in my life — about $10,000!”

Soon after, Rittenberry gave up his lawnmower business and began focusing on his art full time, turning his mower shop into an art studio.

People began arriving at his home from all over, wanting to see his art. One was an art professor from UGA, Robert Clements, who asked him to create benches and folk art for the Georgia Power headquarters in Atlanta. This was Rittenberry’s first time working with stainless steel. “Everyone thought they were made out of silver, they looked so great,” he recalled.

On the wall of Rittenberry’s studio, he has written in black marker: “The hunt is never over.” It’s a quote from “Moby Dick,” a book Rittenberry loves, and he said it’s his life’s motto. He’s always searching for the next sculpture to create or image to draw — he’s in the middle of an intricate pen-and-ink drawing of a lush landscape today. “I’m never without my bow and arrows ready,” he said. “I hunt all the time.”