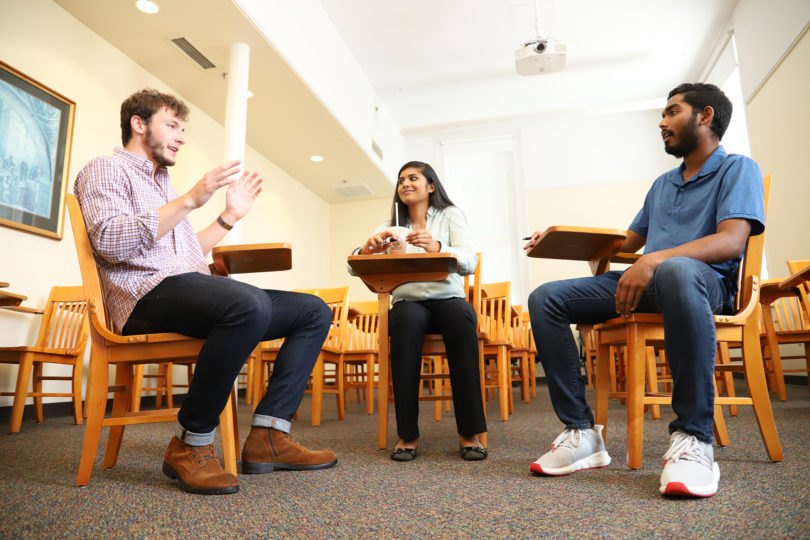 Inmates at the Athens-Clarke County Jail are being tutored weekly by a group of University of Georgia students through the Athens Prison Tutorial.

Kavi Pandian, a fourth-year Honors student and Foundation Fellow majoring in sociology and economics, is president of the organization. “The main service we provide is GED tutoring—that’s what we started off doing,” he said. “The prison assigned us students who hadn’t graduated from high school, and we would figure out where they were academically.”

When Pandian arrived at UGA, there wasn’t an organization like Athens Prison Tutorial on campus. After repeatedly contacting the Athens-Clarke County Correctional Institution over the course his freshman year, he was able to finally break through that summer along with co-founder Manasa Kadiyala, a fourth-year Honors student and Ramsey Honors Scholar studying biochemistry and molecular biology.

After several meetings and conversations during the first semester of their sophomore year, Pandian and Kadiyala started tutoring that October. The organization has continued to grow—to the point that former students will come back to assist, Kadiyala said.

“Some of the inmates with college degrees come and help us teach, so that’s been really helpful on days when we don’t have enough tutors or during finals time,” she said. “The way the GED works is you take two subjects at a time, so we try to give them one they feel relatively comfortable with and one they feel they might need a little bit more work on.”

During tutoring sessions, discussion ranges from mathematical factoring to vocabulary used in a novel.

Relationship building is important to the organization, and for tutor Nicole Googe, a third-year Honors student and Foundation Fellow studying finance, this means connecting deeper with the city she grew up in.

“Organizations that actually impact the Athens community are really important to me, and I think they’re very worthwhile pursuits,” she said. “I enjoy giving back to Athens since it’s where I’m from.”

The joy found in teaching is not completely one-sided, according to the tutors. Oftentimes, the inmates will express how thankful they are for Athens Prison Tutorial.

Jack McCrae, a third-year Honors student and Foundation Fellow majoring in English and psychology, said he was not expecting the inmates to be so appreciative of their work.

“One of the biggest things that caught me off guard was the gratitude they express to us,” he said. “For the most part, a lot of them haven’t had people that have personally invested in them, especially in academics. Just how thankful they are and the desire to learn is something I definitely didn’t expect.”

In just a few years, Athens Prison Tutorial has gone from a few tutors to more than 25 volunteers and is now sponsored by the Honors Program.

Last year, the group hosted a prison graduation ceremony that the inmates’ families had the opportunity to attend.

“The clearest impact as a result of Athens Prison Tutorial was when we got to watch four students who we tutored from day one wear graduation gowns, go up and speak and be handed a diploma,” he said. Fifteen have now earned their GEDs. “It was really powerful to see the pride on people’s faces and take part in a momentous life occasion that I’ve always just taken for granted.”

At the end of each tutoring session, inmates sign out on a piece of paper, fold up their chairs and lean them against the wall in one corner of the room. The tutors pack their school materials in crates and head down a hallway to check out with a prison warden. After all this, the tutoring space looks untouched, almost as if nothing even happened in the room.

For McCrae, the service is something that helps him refocus.

“Going to tutoring every week is something, for instance, where today might not be convenient for me to go, but when I get there, I’m always super happy and thankful that I can get outside of myself for a second.”