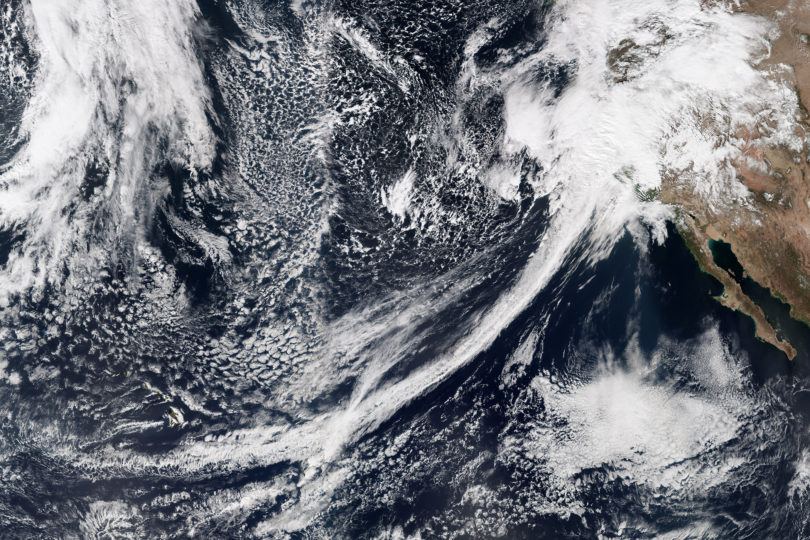 This satellite image shows an atmospheric river stretching from Hawaii to California that is responsible for much of the flooding along the West Coast. (Credit: NASA)

Athens, Ga. – Much of the flood-inducing rainfall that has pummeled California over the last month flowed into the region via a river in the sky. But these so-called atmospheric rivers, which transport large quantities of water vapor poleward from the tropics, can wreak havoc in the Southeast as well.

University of Georgia geography and atmospheric sciences researchers provide the first detailed climatological analysis of Southeastern atmospheric rivers in a new study published in the International Journal of Climatology.

“Drought-busting rainfall this month, which also compromised the U.S.’s tallest dam, has been associated with these atmospheric rivers or what some call the Pineapple Express,” said J. Marshall Shepherd, Georgia Athletic Association Distinguished Professor and director of the atmospheric sciences program at UGA. “Our study shows that they are more common than we thought in the Southeast, and it is important to properly understand their contributions to rainfall given our dependence on agriculture and the hazards excessive rainfall can pose.”

While atmospheric rivers vary in size and shape, those containing large amounts of water vapor, strong winds, and that stall over watersheds vulnerable to flooding, can create extreme rainfall and floods. Such events can disrupt travel, lead to mudslides and cause catastrophic damage to life and property.

The study was constructed from climatological data of atmospheric river events from 1979 to 2014. The research emerged from a graduate seminar on atmospheric rivers developed by UGA Distinguished Research Professor Tom Mote, one of the authors of the study.

“A large portion of atmospheric river research has focused on the western coast of the United States, so the goal of this study was to improve our understanding of atmospheric river events throughout the Southeast,” said Neil Debbage, doctoral candidate in the UGA department of geography and first author on the study.

“A better understanding of when atmospheric river events occur in the Southeast, their basic characteristics, and the weather patterns conducive for their development will lead to improved forecasting and community awareness of atmospheric rivers in the region,” Debbage said.