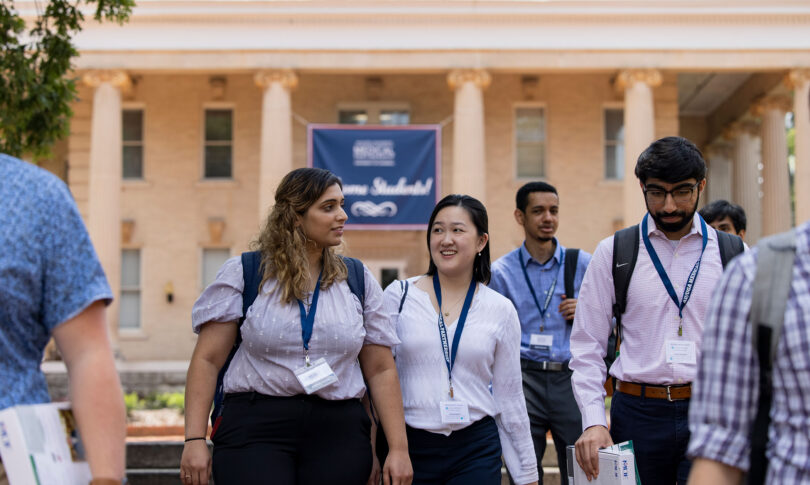 The Augusta University/University of Georgia Medical Partnership first caught Eric Santana’s eye when he was in his freshman year.

“I was always imagining how enjoyable it would be to stay at UGA for a few extra years and also have the opportunity to continue my education in a place that’s public and has affordable rates,” the psychology grad said.

This week, he officially began the next phase of that journey with orientation week as part of the Medical Partnership’s Class of 2025. Santana is one of 60 new students, evenly split between women and men. This year’s class is the largest in the partnership’s history, part of a statewide effort to combat the nation’s physician shortage. The latest report from the Association of American Medical Colleges estimates that the U.S. could see an estimated shortage of up to 124,000 physicians by 2034. 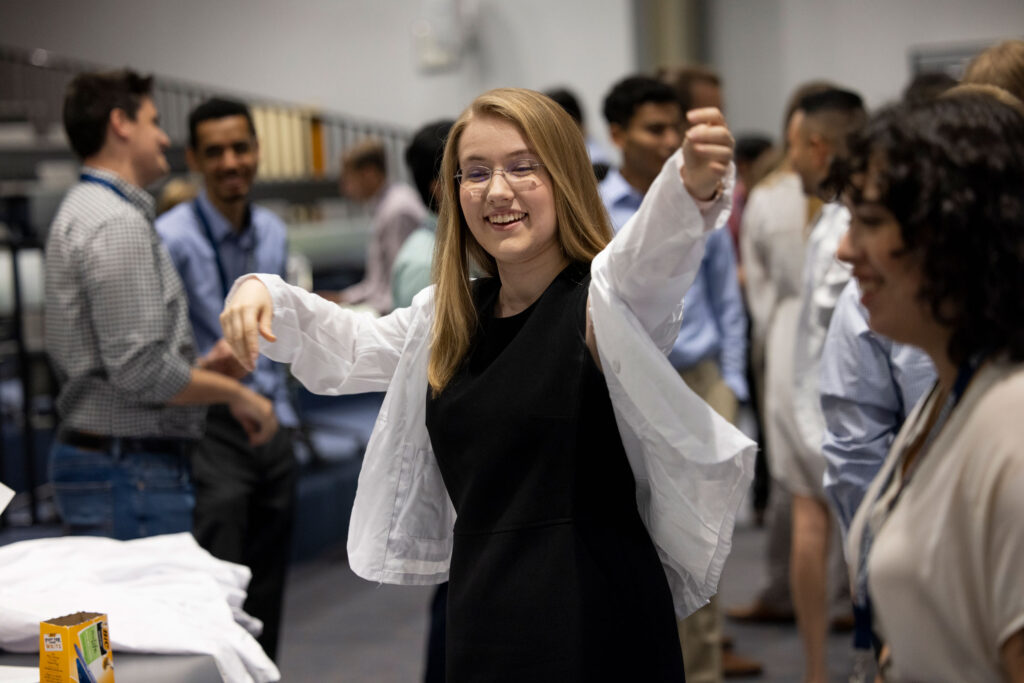 First-year medical student Christie Taylor tries on a white coat as part of orientation week inside the auditorium at George Hall on the Health Sciences Campus. (Photo by Andrew Davis Tucker/UGA)

In the state of Georgia, the shortage is particularly concerning, with just under 25,000 actively practicing physicians serving a population of almost 11 million residents. Multiple counties lack a single physician, according to the Georgia Board of Health Care Workforce. But that’s a challenge the medical partnership is taking head on.

“As the state’s only public medical school, it is our responsibility and privilege to lead the way in addressing the state’s health care needs,” said David Hess, dean of Augusta University’s Medical College of Georgia. “Expanding the class size at our partnership campus in Athens for two years in a row now, and at the main campus in Augusta as well this year, is one way we are working to ensure Georgia has not only enough doctors to face its growing shortage of physicians but a healthy economy as well.”

The partnership between Augusta University’s Medical College of Georgia and the University of Georgia was established in 2009, and the state is already reaping the benefits of the arrangement. Of the 96 medical partnership students who have completed their residency training since the partnership’s founding, 38 are currently practicing in Georgia and 43 are doing their residency or fellowship in the state. Many of them are practicing in rural parts of the state.

Over the next three years, the partnership will continue to accept 60 new medical students in each class, with the goal of having 240 students on campus in fall 2024. 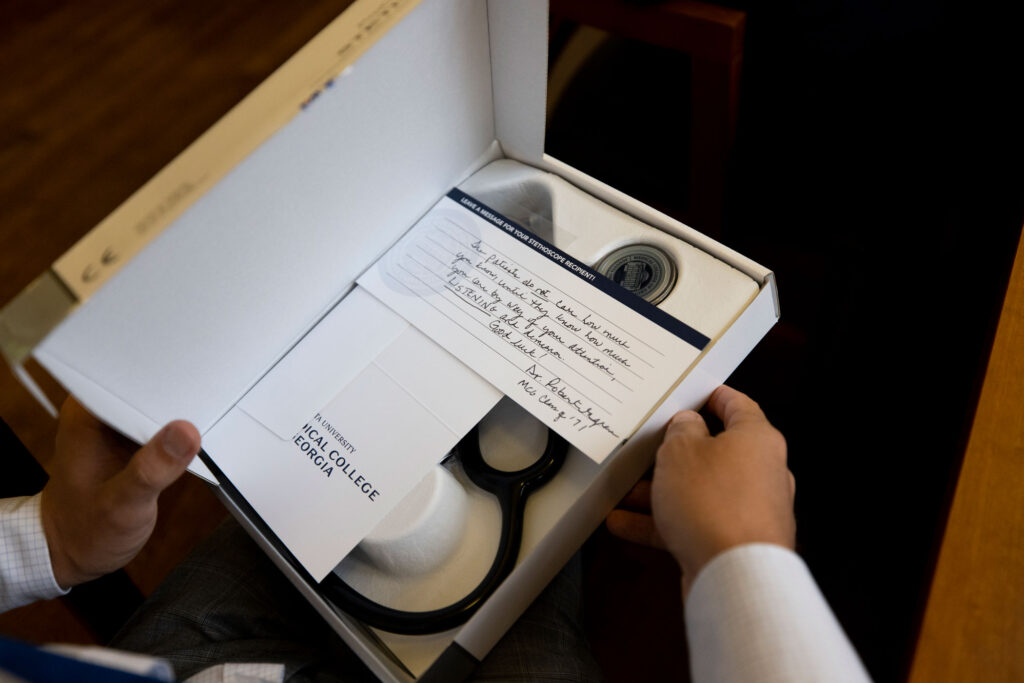 MCG alumni handwrite notes to accompany stethoscopes the first-year medical students are given during orientation week at the Carnegie Library on the Health Sciences Campus. (Photo by Andrew Davis Tucker/UGA)

In preparation for this expansion, Russell Hall on the Health Sciences Campus underwent a $3 million renovation, including a new state-of-the-art simulation center and clinical skills lab, renovated large classroom spaces for active learning and additional small group rooms for student learning. The simulation center alone went from under 1,000 square feet to 3,300. The renovation also added some new office space for 17 new faculty and staff members.

“This is a major milestone for our campus, for our community and for the state of Georgia,” said Michelle Nuss, campus dean of the partnership and a professor of internal medicine and psychiatry. “We conducted nationwide searches to find the most qualified faculty to educate our students. This new group of talented clinical educators and basic scientists have come to our campus to help equip our students with the assets and tools they need to face the world of medicine head on and become the best doctors they can be.”

Even as class sizes and faculty increase, the partnership remains committed to the hands-on, patient-center learning approach it’s known for. 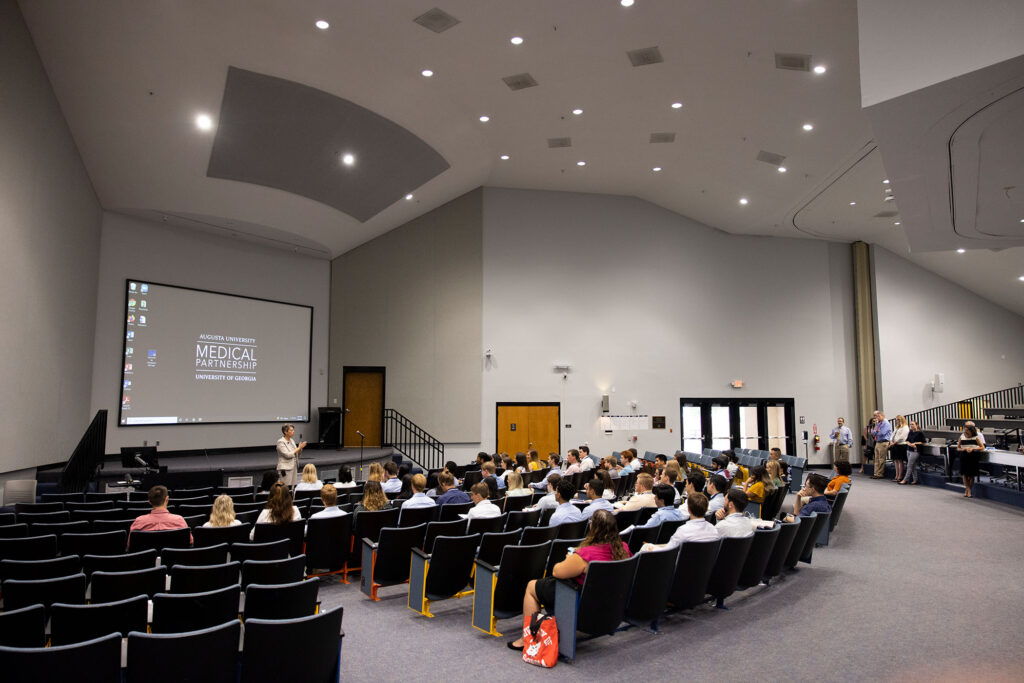 Dean Shelly Nuss, left, talks to the group of 60 first-year medical students for the first time inside the auditorium at George Hall on the Health Sciences Campus. (Photo by Andrew Davis Tucker/UGA)

Partnership students help staff the Athens Free Mobile Clinic, which continues to play an important role in educating underserved community members on the importance of preventive primary care including the COVID-19 vaccine. And students can also volunteer with the Mercy Health Center, a free health care clinic that provides care to the uninsured in several northeast Georgia counties including Clarke.

“One of my professors today said that she didn’t do the kind of things that we were doing—presenting and working with a case—until her third year of medical school,” Santana said. “We’re going to see patients a lot sooner because this program is so integrated in the community. It’s really refreshing, and I feel lucky to be here.”