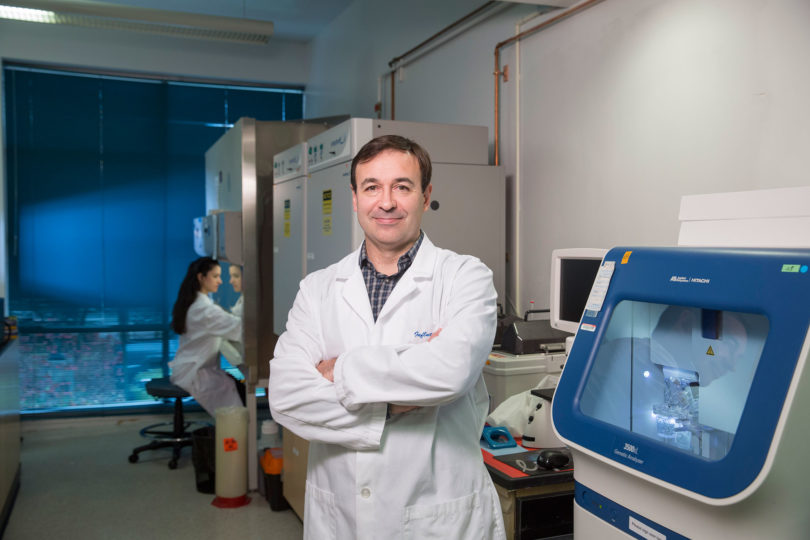 Daniel Perez studies what causes the influenza A virus to catch and spread through avian hosts and how to prevent it from spreading to other species.

Daniel Perez’s research is driven by one question: What exactly makes the influenza virus tick?

Particularly, he studies what causes the influenza A virus to catch and spread through avian hosts and how to disrupt the virus and prevent it from jumping to other species.

Perez is part of the Poultry Diagnostic and Research Center in the population health department at the College of Veterinary Medicine. His work focuses on interspecies transmission, specifically stemming from avian reservoirs, and how the pathogenesis of the virus affects said transmission.

Understanding surface-level protein interaction of the avian flu, the largest reservoir with the most viral diversity, is key to understanding how it jumps within its own species. The next step is to understand how it jumps to other species and can potentially cause a human pandemic, according to Perez.

“Flu is not jumping species to make you sick, flu is jumping to survive,” he said. “And, we don’t immediately have an outbreak just because one chicken gets it, but the proteins dictate what a virus can and cannot do.”

For the virus to develop in a host and potentially cause an outbreak in other species, the virus needs a perfect storm of the right strain at the right time, according to Perez.

“There are many hits and misses within transmission, so we need to figure out what exactly makes the virus hold onto a new host,” he said.

Originally from Argentina, Perez earned a doctorate from the University of Nebraska Medical Center in 1995 and has been focusing on influenza ever since. It was at Nebraska that he started focusing on the protein level of the virus. Understanding how the viral proteins interact with one another aids researchers in disrupting this interaction. If you disrupt the protein interaction, he said, you can disrupt the virus replication. If you can disrupt the replication, you have a better chance at intervention.

At UGA, Perez holds the Caswell Eidson Chair in Poultry Medicine where he executes studies that support PDRC’s threefold mission of teaching, research and service in poultry medicine. His lab is part of the Center for Research on Influenza Pathogenesis, one of five Centers of Excellence for Influenza Research and Surveillance funded by the National Institute of Allergy and Infectious Diseases.

In addition, the Perez lab carries out active surveillance in birds and pigs in collaboration with institutions in Guatemala and Argentina. Perez also maintains active collaborations with investigators at the USDA’s National Animal Disease Center, in Ames, Iowa, and the Southeast Poultry Research Laboratory in Athens.

Working at the animal-human interface at the PDRC helps drive research and resources, he said. Though the PDRC prioritizes understanding avian transmission to protect population health and develop alternative poultry vaccination strategies, the information is directly related to human and other species’ susceptibility because influenza A has an avian reservoir, he said.

Perez’s latest publication shifted away from avian hosts and toward Argentinian pigs. He worked with Argentinian researchers on a two-year surveillance of the evolution of influenza A in swine. Published in Comparative Immunology, Microbiology and Infectious Diseases in February, the study found herds with endemic influenza A infection on a single farm, which enabled the population to generate genetic mutations that elude host immune responses and further the viral evolution. (The study is available online at tinyurl.com/zrtoboz).

Based on Perez’s prior work, this study reaffirms the importance of isolating the evolution of influenza A in swine due to the risk of reestablishment of novel viruses into the human population. Because the 2009 H1N1 pandemic likely originated in swine, the study further reinforces the need for understanding how viruses circulate and develop vaccines based on locally circulating strains to stop further transmission.