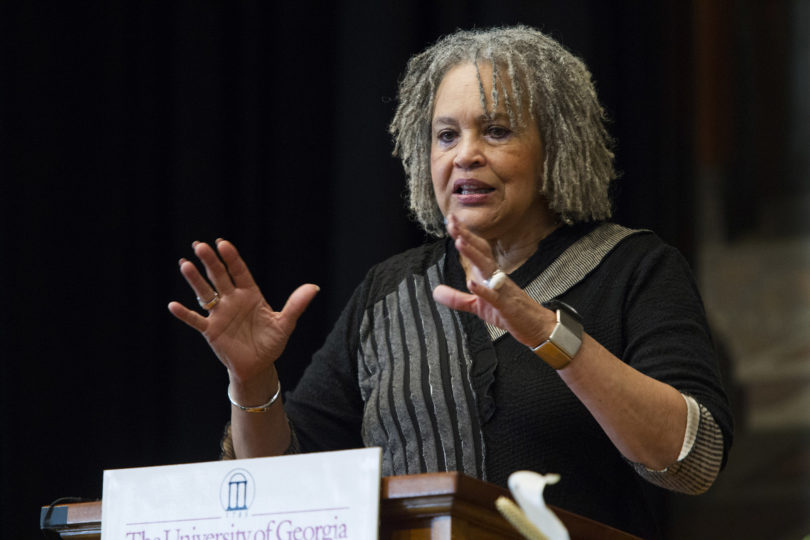 Charlayne Hunter-Gault gives a Charter Lecture March 31. She spoke on her time working with Nelson Mandela.

Award-winning journalist and author Charlayne Hunter-Gault remembers exactly when on Feb. 11, 1990, she found out that Nelson Mandela was released from prison.

Hunter-Gault, who told the tale during a Charter Lecture March 31, was about to start her “Saturday chores” when a producer from PBS called her telling her to turn on her television.

“I don’t ask questions when a producer says turn on a television,” said Hunter-Gault, who was the first African-American woman to attend UGA. “Nobody expected (Mandela’s release). The first words out of my mouth weren’t ‘Oh, isn’t that great,’ they were ‘Book the flight.’ “

Hunter-Gault told a near capacity audience at the Chapel about how she had to guarantee Jim Lehrer, of PBS’ Lehrer Report, she would get an interview with the recently released South American civil rights leader, even though she did not have one officially planned.

“I said ‘If anybody can get an interview with Mandela, I can,’ ” she said.

Hunter-Gault did get an interview shortly after Mandela’s release, and many more during other pivotal times for South Africa. The UGA alumna shared some of the tales during the lecture, “Reflections on Nelson Mandela.”

As she recalled details of Mandela’s life, Hunter-Gault said that his insistence on forgiveness and reconciliation helped avoid a bloody civil war after apartheid ended in South Africa.

“He showed he was a formidable and charismatic political leader of a state never before witnessed in South Africa, and the supporters of the apartheid had every reason to fear him,” Hunter-Gault said.

Hunter-Gault also told the audience about the time she met with Mandela for an interview, and he opened up about his prison time. After he had given a flurry of other interviews before hers, Hunter-Gault made sure Mandela had a fresh cup of tea before their chat. She then began to tell him about how she had lived through the civil rights movement in the U.S.

“Even before I could finish the question he asked ‘Do you know Ms. Maya Angelou?,’ ” Hunter-Gault said, adding that Mandela shared he had read all of Angelou’s books in prison. “Of course then I got that breakthrough, and I said ‘Well of course.’ Though I’d never met Maya.”

During everything he experienced, Hunter-Gault said, Mandela remained true to himself and his beliefs, even in the face of death.

“Today, when I think about Mandela and his legacy, I am thinking about the power of values,” she said, “values that are timeless and transcendent; values that helped develop Mandela’s consciousness, his conscience and his courage; values that shaped not only the destiny of South Africa and its people, but shaped the world.”