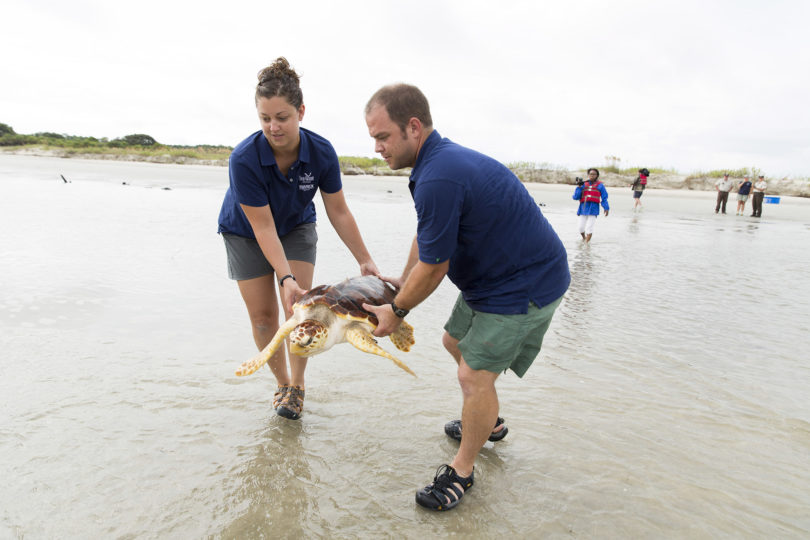 Ossabaw was a little unsure of the sandy beach and the clicking cameras Sept. 8, but the loggerhead turtle that has lived at the UGA Aquarium since it was rescued in 2011 finally made it home to the ocean.

“It went pretty smoothly,” said Devin Dumont, the curator at the aquarium, operated by the UGA Marine Extension Service, a unit of the Office of Public Service and Outreach.

“It was a little distracted by the media trying to capture the moment, but once Ossabaw saw the ocean, its instincts kicked in,” Dumont said. “It kept going, and once it made it to the breakers it went on its way.”

Dumont and other MAREX employees were supervised by the U.S. Fish and Wildlife Service during the turtle’s release from Wassaw Island National Wildlife Refuge. The release was approved by the state Department of Natural Resources. Kris Williams of the Caretta Research Project, a private organization that works to protect the loggerhead sea turtles, tagged Ossabaw with number-coded tags and a passive integrated transmitter tag before the release. The PIT tag is similar to microchips used for pet cats and dogs. Both types of tags can be used to identify Ossabaw in the future.

“Ossabaw was a champ,” said Lisa Olenderski, assistant curator at UGA Aquarium. “We watched it swim away for a little while, and I waited to see its head pop up for air a few times. It was a nice moment.”

Ossabaw hatched on Ossabaw Island on Aug. 15, 2011. After the main hatching event of the entire nest, the hatchling sea turtle was discovered still in the nest by the Georgia Sea Turtle Cooperative network and likely would not have survived without intervention. Mark Dodd, a wildlife biologist and sea turtle program coordinator for the GA-DNR, gave the hatchling to the UGA Aquarium, where it has served as an ambassador for sea turtle education.

The UGA Aquarium collaborates with the GA-DNR, U.S. Fish and Wildlife Service and the Caretta Research Project to accept a new hatchling “straggler” every few years. The hatchlings live at the facility for three to four years before being released or transferred to a larger home at the Georgia Aquarium in Atlanta. Approximately 70,000 people have met Ossabaw at the UGA Aquarium and learned about loggerheads on the Georgia coast.

While loggerheads are the most common, they are listed as threatened by the U.S. Fish and Wildlife Service and the Georgia DNR. For protected species, the threatened status is only one notch above being endangered. However, after about 35 years of conservation efforts at the federal and state level, the DNR reports nesting numbers on the Georgia coast have been increasing dramatically over the last several years.