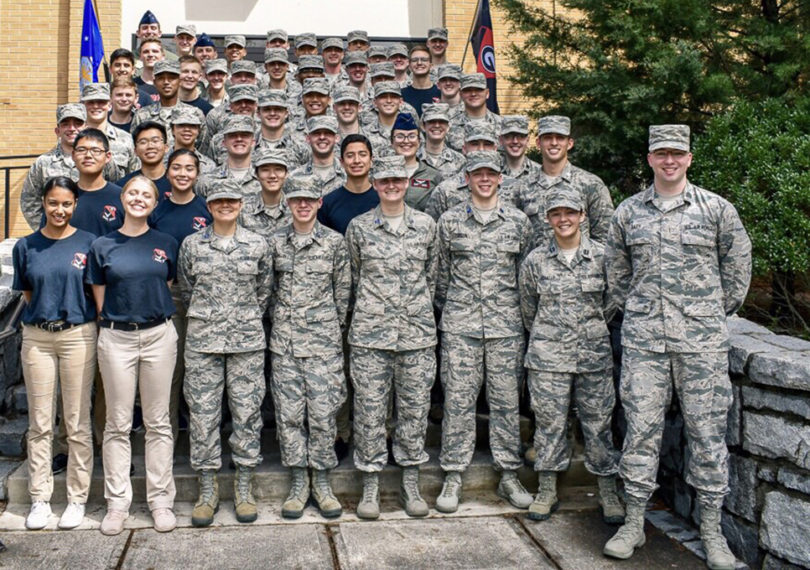 Ryan Baity graduated as top cadet at the University of Georgia in his cadre and among the top 10 percent in the nation.

Last week, he received a Bachelor of Science in computer science with an emphasis in cyber security and computer systems. Commissioning from Air Force ROTC as a graduate, Baity was selected directly out of his undergraduate program to attend the Air Force Institute of Technology, for which only 17 cadets were chosen from around the country across all majors. Baity was the only one selected to earn his Master of Science in cyber operations in-residence as his first assignment as a second lieutenant in the Air Force.

“Whether it’s programing in multiple languages or designing networks, I’ve learned it all here at UGA,” said Baity. “All of the principles and sets of baseline knowledge that I acquired during my four years in the department of computer science will be fully employed both in earning my upcoming Cyber Operations degree as well as in my day-to-day job as a leader in the cyberspace world.”

As an Air Force ROTC student, Baity excelled in his role as the cadet wing commander in charge of steering and overseeing all cadet operations for the semester, and was selected to attend the Advanced Cyber Education Program at the Air Force Institute of Technology.

Baity says that the faculty and staff of the computer science department in the Franklin College of Arts and Sciences have encouraged and supported him through school. “I always had help when I needed it,” he said.

He is especially appreciative of computer science lecturer Michael Cotterell, a Franklin College of Arts and Sciences alumnus who earned Bachelor of Science and doctoral degrees in computer science in 2011 and 2017, respectively.

“He truly helped me confirm that I was interested in the cyber world, and I can’t thank him enough. He was personable, intelligent and instrumental in my growth within the computer science discipline. I feel that my time in his computer networks class helped me fall in love with the networking side of cyber.”

Baity has spent three years of his time on campus as a member of Franklin Residential College.

“The Franklin Residential College has created many of my friendships and a ton of experiences I will always remember. Chera Watts is our academic advisor in residence. She is there with anything you need. She and her son Cooper are a delight and always bring a smile to my face.”

Annemarie Hitchcock, Baity’s advisor since his summer orientation in 2015, provided the level of personal guidance indicative of UGA but not always associated with large universities.

“I’ve been lucky enough to be one of the few students to keep the same academic advisor my entire college career, and what an advisor she was,” Baity said of Hitchcock, who joined the Franklin College Office of Academic Advising in 2011. “As an Air Force ROTC student, I must meet with my advisor within the first two weeks of school to get paperwork signed off and passed up to my commander. This was never an issue, as Ms. Hitchcock would sometimes reach out to me first. Never once did I leave with a question unanswered.”

Baity grew up in an Air Force family. His father served as an enlisted member of the Air Force for almost 24 years, retiring in 2013.

And as he furthers his career, Baity hopes to stay with the Air Force and serve his country as a cyber professional.

“I want to be a leader in the cyber domain. This is an exciting new frontier that is already becoming so prevalent in our lives.”