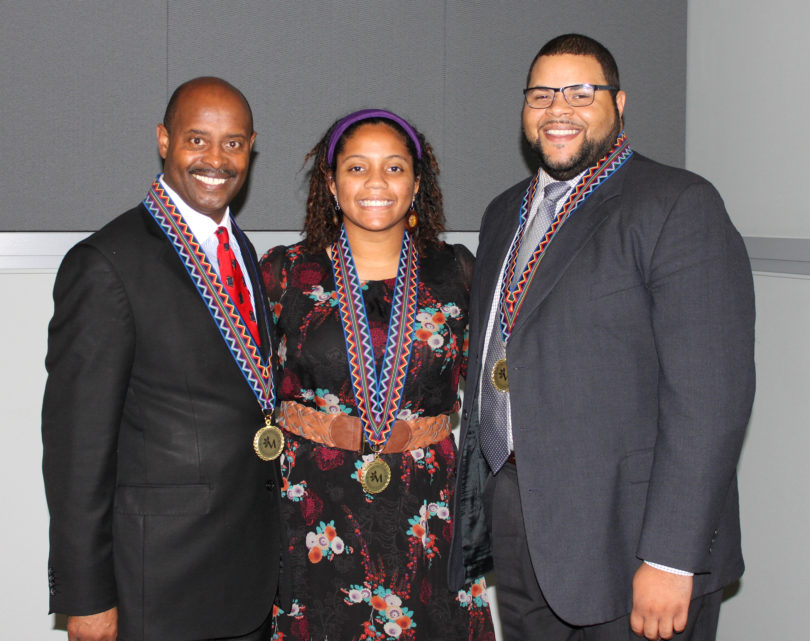 The Leslie K. Bates Medal of Excellence was presented to Marvin J. Nunnally

Athens, Ga. – The Leslie K. Bates Medal of Excellence was presented to Jon Hurst, Mariah Domenech and Marvin J. Nunnally during the Multicultural Services and Programs Senior Leader Reception on April 25 at the Richard B. Russell Building Special Collections Libraries. The three were honored for their commitment to the University of Georgia’s multicultural community.

Hurst joined UGA’s staff in 2012. He currently serves as director of the LGBT Resource Center. A self-professed political junkie and “theatre nerd,” his professional experience prior to UGA included nonprofit management in the area of HIV/AIDS education, outreach and prevention and serving as a campaign staffer for then-U.S. Rep. Tammy Baldwin of Wisconsin.

A champion of social justice education, Hurst has played an instrumental role in the development of the Ignite Social Justice Retreat for students and Prism, a dialogue group for LGBT students of color.

Domenech is a native of Snellville who will receive her Bachelor of Science degree in early childhood education in December. She has served as a student graphic designer in Multicultural Services and Programs for two years, and has been hailed by co-workers and fellow students for her creativity and strong work ethic.

She has regularly made the dean’s list and is a member of the UGA women’s club soccer team.

Nunnally is a Watkinsville native who received his bachelor’s degree in political science from the university and his Juris Doctor from Atlanta’s John Marshall Law School. He serves the Athens area through involvement in numerous civic, religious and professional organizations, including leadership positions with the Athens-Clarke Heritage Foundation, Athens Nurses Clinic, the Youth Academy and the Athens Masonic Association.

In partnership with MSP, Nunnally has served for the last two years on the Georgia African American Male Experience advisory board in support of institutional efforts to recruit and maintain a strong community of African-American men at UGA.

“This year’s honorees have contributed greatly to the success of Multicultural Services and Programs through their support of staff and students in a myriad of ways both big and small,” said Zoe M. Johnson, MSP director. “We are truly grateful for their involvement and impact.”

Leslie K. Bates served as the first director of MSP when the office opened its doors in September 1989 under the name Minority Services and Programs. The Leslie K. Bates Medal of Excellence recognizes students, faculty, staff and community members who have dedicated their time and service in support of MSP and its initiatives.

The Senior Leader Reception is held annually to recognize those students who have excelled in advancing the MSP mission and who have provided exceptional leadership to their student organizations.

Multicultural Services and Programs is a unit within UGA Student Affairs.