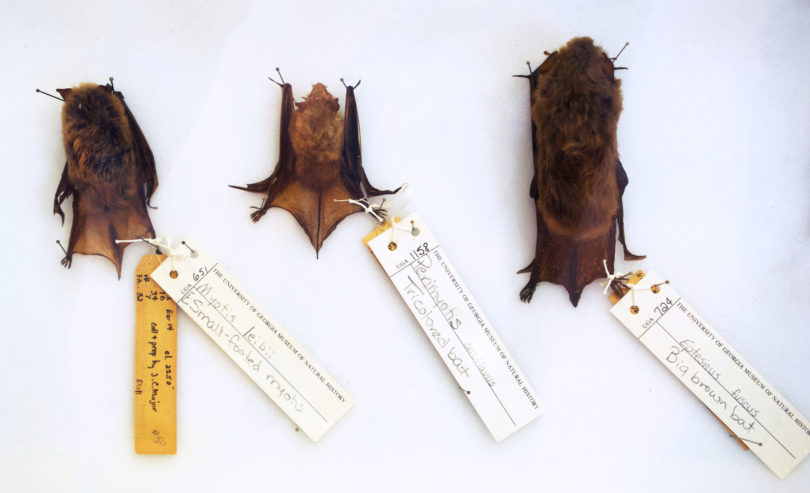 While bats certainly get their share of the limelight during Halloween, current events and an exhibit at the University of Georgia’s Odum School of Ecology serve as reminders that bats deserve our attention year-round.

“Creatures of the Night,” which features a collection of bats from the Georgia Museum of Natural History, sheds light on how vital bats are to ecosystems and explains some of the threats they face and how people can get involved in bat conservation. The exhibit is on view at the school, 140 E. Green St., from 8 a.m. to 5 p.m. Monday to Friday now through Dec. 20.

The exhibit includes a bat house like those being installed in Athens through the Bulldogs for Bats Georgia Funder campaign. Bulldogs for Bats is an interdisciplinary initiative to fund the construction and installation of bat houses and night-blooming gardens locally and provide opportunities for students and the general public to learn about the importance of bats. 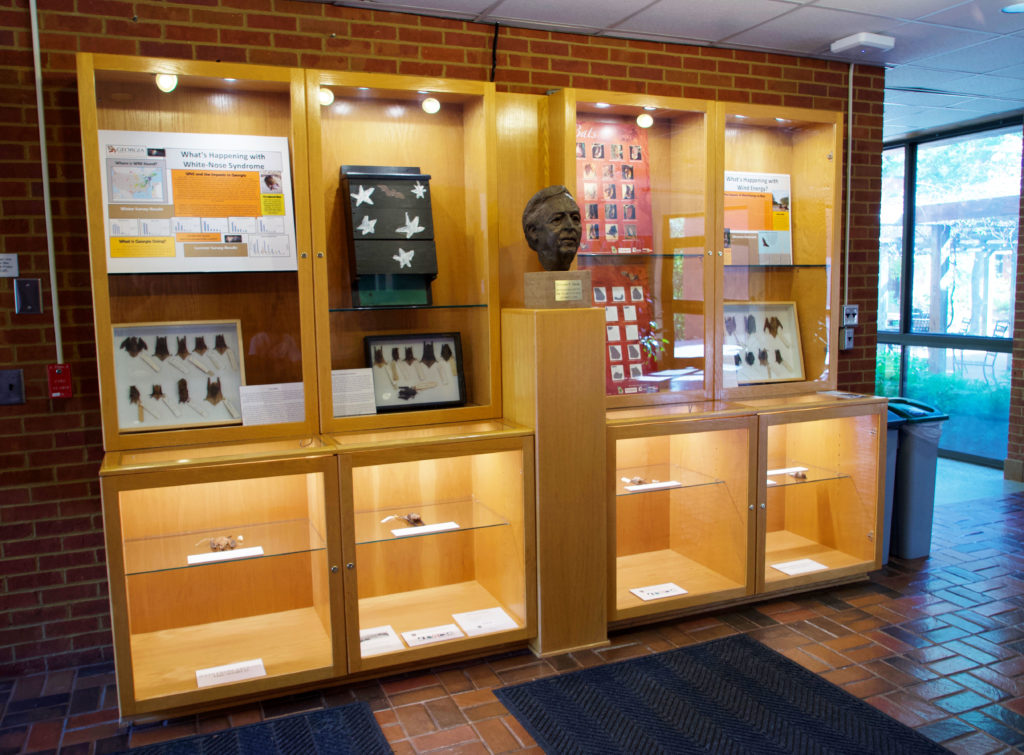 Bulldogs for Bats expands on a project started by Kristen Lear, a Ph.D. candidate in the Warnell School of Forestry and Natural Resources, with a Campus Sustainability Grant in 2018. Partners include the Odum School of Ecology, Warnell School of Forestry and Natural Resources, Center for Integrative Conservation Research, UGA Office of Sustainability, State Botanical Garden of Georgia, UGA Division of Facilities Management Grounds Department, Georgia Museum of Natural History, and Habitat for Bats.

The Bulldogs for Bats Georgia Funder project runs through Oct. 31. To learn more or to contribute, visit http://give.uga.edu/bats. To find out how to participate in building bat houses or planting night-blooming gardens, contact Kristen Lear at klear@uga.edu.

Bats can be found worldwide, except in regions with extreme cold. In Georgia alone, there are 16 species of bats, all of which are insectivores.

“The biggest thing bats are doing in Georgia is helping out with insect control,” said Nikki Castleberry, assistant curator of vertebrate collections, mammalogy, ornithology, and herpetology collection at the Georgia Museum of Natural History, who organized the exhibit with GMNH curatorial staff member Nicole Pontzer. “A lot of the insect species they focus on are detrimental to crops, and if you don’t want mosquitoes bugging you, and you don’t want some of the beetles and moths in your home garden, then bats are important,” she said.

In addition to insect control, bats play a vital role in pollination and seed dispersal around the world. But like many valuable species, bats are facing threats from climate change, habitat loss and disease. The exhibit highlights two of the biggest threats to bats in Georgia: white-nose syndrome and the growing wind energy sector.

White-nose syndrome is a disease caused by the fungus Pseudogymnoascus destructans, or Pd. It first emerged in caves in the United States in 2006 and was confirmed in Georgia in 2013. By 2019 the Department of Natural Resources found that 95% of the cave bats in Georgia were gone.

“The ground was littered with dead bats,” Castleberry said, recalling an experience conducting bat counts a few years ago. “Now when we go into those caves, we just don’t see the same number of bats as before.”

Bats in Georgia are also threatened by the growing wind energy sector. It is estimated that over 600,000 bats are killed by wind turbines annually, with hoary bats seeing the largest decline. Wind turbines affect bats differently than birds; they aren’t getting hit by the turbines, but rather experiencing internal hemorrhaging caused by changes in air pressure created by the turbines. Some possible solutions are ultrasonic acoustic deterrents, which persuade bats to avoid the area,  and shutting down wind energy plants during predictable periods of high bat fatalities.

“We are seeing such a decline in cave bats that anything we can do to help any of the bats is positive,” said Castleberry.