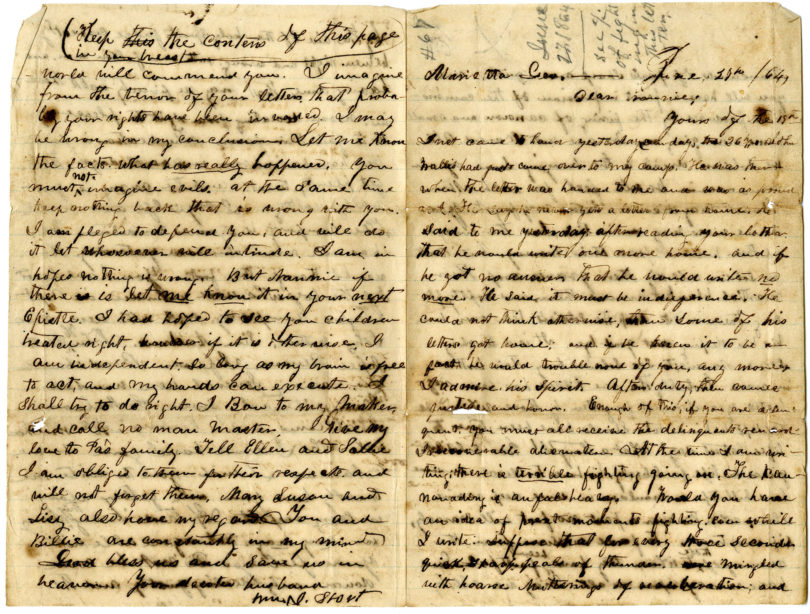 Athens, Ga. – Today marks the 150th anniversary of the Battle of Kennesaw Mountain and a letter recently donated to the University of Georgia Libraries provides an eyewitness account.

“At the time I am writing, there is terrible fighting going on,” William Joseph Short wrote to his wife, Nancy. “The cannonading is awful heavy. Would you have an idea of present moments fighting even while I write: suppose that for every three seconds quick sharp peals of thunder, mingled with hoarse mutterings of reverberation and thousands of peals sharp and quick and you will have a faint impression of the commotion, produced by the firing of cannon and small arms now going on. We are not scared. All we soldiers dread is the burying some of our comrades.”

The Battle of Kennesaw Mountain began at 8 a.m. on June 27, 1864. By noon, Union Maj. Gen. William T. Sherman had lost the battle, along with 3,000 of his soldiers. After a five-day standoff, however, his army outflanked the Confederate Army, forcing it to retreat from Kennesaw Mountain to Smyrna, and Sherman continued his march toward Atlanta.

This letter is part of the William Joseph and Nancy Wallis Short family papers recently donated by Roger Rowell to UGA’s Hargrett Rare Book and Manuscript Library. This collection joins more than 500 others documenting the Civil War experience in Georgia and available for research at the UGA special collections libraries.

Short enlisted in the Confederate Army in 1862 as a member of Company G, Second Georgia Regiment of Cavalry and he and his wife corresponded regularly. His letters home detail life on the battlefield and make heartfelt inquiries about the conditions at home.

“…Brother soldiers will dig their graves, wrap their martial blanket around them and softly placing them in it drop the soldier’s tear over him, bid his sleeping dust good-bye,” Short wrote. “It is a touching scene, Nannie, to see soldiers bury their brothers in arms.”

The UGA Libraries have joined with other cultural institutions observing the 150th anniversary of the Civil War in recent years, with observances culminating this year. An annual exhibit of Civil War materials at the Hargrett Rare Book and Manuscript Library gallery through July focuses on the Battle of Atlanta.