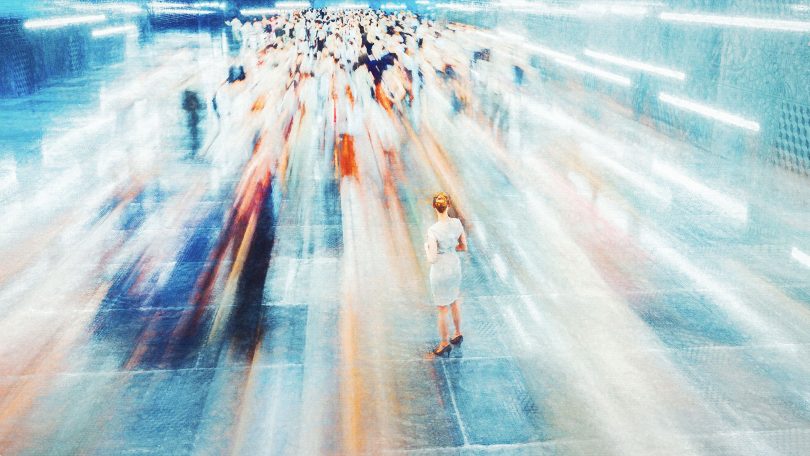 The timing was almost unbelievable.

Allison Ausband, Delta’s senior vice president of in-flight service, had just been to a Delta Lunch and Learn about human trafficking. Later that same week, her husband got a call from one of his employees.

“My daughter has been taken, and we think she’s been trafficked.”

Ausband was horrified. The teenage girl had been walking to a friend’s house just north of Atlanta when someone grabbed her off the street.

After five grueling days, the woman’s daughter was found at a local food mart. Although she survived, the girl was traumatized. And the scars from the experience ran deep. She left the city.

“Human trafficking is real, and it’s around you. It’s hidden in plain sight,” says David Okech, an associate professor in the University of Georgia’s School of Social Work and human trafficking expert. “It destroys people, households, and communities.” 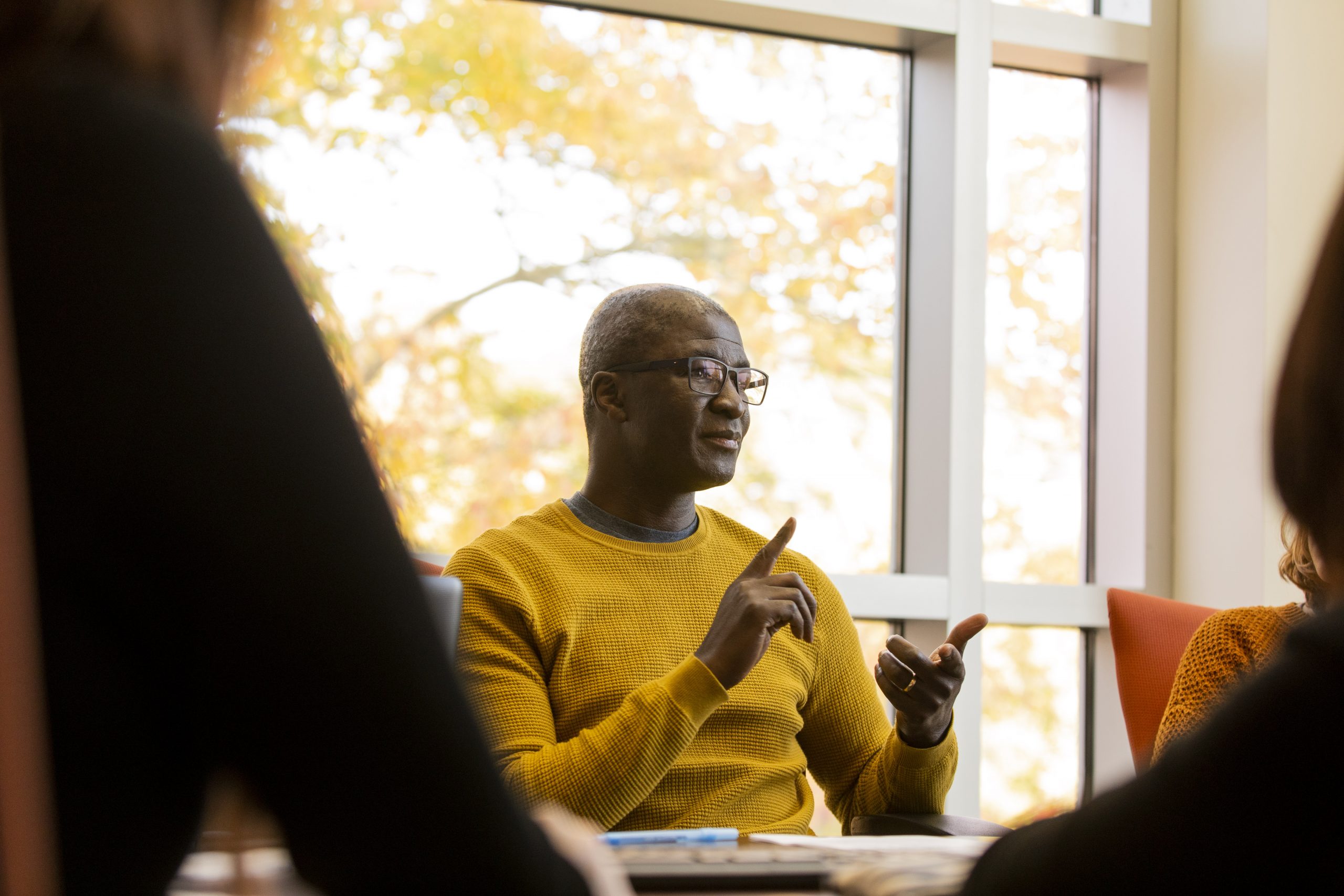 The U.S. Department of State defines human trafficking as obtaining some type of labor or commercial service through force, coercion, or fraud. Put even more simply, it’s modern-day slavery, a worldwide industry that’s worth about $150 billion and a lucrative international criminal enterprise that’s second only to drug trafficking.

“Globally, forced labor makes up the majority of human trafficking, but that’s not what people think about when they think about trafficking,” says Lydia Aletraris, program coordinator for the UGA-founded international consortium Africa Programming and Research Initiative to End Slavery (APRIES) and an associate research scientist in the School of Social Work. “They usually just think about sex trafficking.” 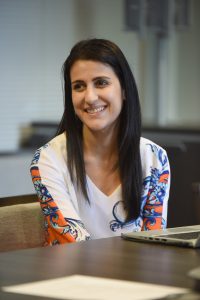 Lydia Aletraris serves as the program coordinator of African Programming and Research Initiative to End Slavery, known as APRIES. (Photo by Peter Frey/UGA)

But trafficking can take many forms, from sex work to field labor to domestic work. Victims are typically lured into these “jobs” by promises of high wages and a better standard of living, sometimes in a more developed country. But those assurances quickly prove untrue.

It’s hard—if not impossible—to pin down the actual number of trafficking victims. Current estimates believe tens of millions of people are forced into labor worldwide each year. In the U.S., experts estimate around 50,000 people are trafficked across state and international borders. No state is immune.

For researchers like Okech, not knowing the scale of the problem is a huge obstacle to devising the best solution. But it’s one he’s trying to fix.

What is UGA Doing to Help

To further efforts to combat this global problem, the university established the Center on Human Trafficking Research and Outreach this spring. Housed in the School of Social Work, the interdisciplinary center is a collaborative effort that aims to identify better ways to measure the prevalence of trafficking while crafting real-world solutions to equip policymakers and nonprofits with the tools and information they need to combat trafficking on a large scale.

Okech serves as the center’s inaugural director and is joined by colleagues in the College of Public Health, Franklin College of Arts and Sciences, and the School of Law, in addition to the School of Social Work. Another key element of the center is its immersive learning environment for students across the university. Okech and his team plan to include students in nearly every facet of their work—from researching, to writing manuscripts for publications and grant applications, to engaging with stakeholders and meeting with government officials to better understand how policy is made.

In addition to the new center, Okech, along with APRIES, received a $19.75 million grant from the U.S. Department of State’s Office to Monitor and Combat Trafficking in Persons to study how, why, and how frequently trafficking occurs in West Africa.

The goal of APRIES is to reduce the prevalence of modern slavery across the globe by helping community-engaged agencies in the area implement prevention, prosecution, and protection strategies. To this aim, Okech and his team also launched the Prevalence Reduction Innovation Forum. This global research program enlists scholars in the U.S. who work closely with local scholars to test and develop the best ways to estimate the prevalence of human trafficking in six countries—Brazil, Costa Rica, Morocco, Pakistan, Tanzania, and Tunisia. The forum aims to standardize how human trafficking is defined and measured in research, and it’s the first of its kind.

“Getting to a standardized definition will be helpful given that prevalence rates are often unreliable, inaccurate, or misinterpreted in so many different ways,” Aletraris says. “Having better estimates means we can have more effective programming to combat human trafficking.”

In addition to filling a sizeable data gap, the project builds a framework for combatting trafficking and reintegrating survivors toward a path of stability and productivity. Already, consortium members have developed a model for reintegration, increasing transparency in labor supply chains in the cocoa and garment industries, and helping former child soldiers reacclimate to
civilian life.

For Allison Ausband, that phone call was a turning point. 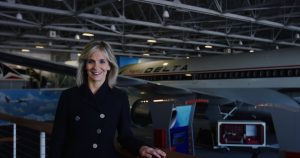 Years earlier in 2011, Delta became the first airline to sign the ECPAT International Tourism Child-Protection Code of Conduct, the world’s first and only voluntary set of business principles that travel and tour companies can implement to prevent the sexual exploitation and trafficking of children.

But Delta CEO Ed Bastian issued a challenge to Ausband.

He wanted to know how the company could get closer to and better support survivors. And he wanted her to lead the effort.

“I head up a steering committee that focuses on helping make the journey for survivors to move more quickly from being a survivor to a thriver,” Ausband says. One aspect of that was the creation of an apprenticeship program at Delta for survivors through a partnership with Wellspring Living. Through the program, survivors can build resumes and receive mentorship from Delta employees. (The participants’ backgrounds aren’t shared, so they are treated like any other Delta employee.)

“I think that’s honestly where I’ve learned the most,” Ausband says. One woman who came through the program had been trafficked by her mother as a young child. “I, to this day, have never met a more courageous woman. If there’s inspiration for me every day, she is my inspiration to fight harder and faster, every single day.”

According to Ausband, Delta makes it a priority to educate the entire Delta team across the globe on signs of human trafficking. In addition to their regular jobs, everyone from flight attendants to check-in crew are gauging whether a traveler seems to be there willingly. Some of the signs include whether an individual avoids eye contact, if all their credentials are held by someone else, or if they’re nonresponsive to questions and their travel companion answers for them, among others.

We should care because these are human beings, every single woman, child, man, young boy,” Ausband says. “If everybody just knew the signs of trafficking, we could all do something about it.” —Allison Ausband, S.V.P. of In-Flight Service and leader of Delta’s Executive Steering Committee Fighting Human Trafficking

That training pays off.

“Two of our mechanics were at a fast-food restaurant in Florida, and they were sitting next to these young girls and men,” Ausband says. “They had taken the training. They said, ‘Are you seeing the same thing I’m seeing?’ They were recognizing the signs of trafficking from the training.”

The Delta employees walked out to get the tag number of the suspicious group’s car. They reported it. It turned out to be a stolen car, and the girls were being trafficked.

“We should care because these are human beings, every single woman, child, man, young boy,” Ausband says. “If everybody just knew the signs of trafficking, we could all do something about it.”

In January 2020, the First Lady and the Georgians for Refuge, Action, Compassion, and Education Commission (GRACE) partnered with the Georgia Department of Administrative Services to launch human trafficking awareness training for all State of Georgia employees and the general public. Gov. Brian Kemp BSA ’87 and the First Lady established the GRACE Commission after the FBI named Atlanta a top city for human trafficking. The commission brings together public officials, law enforcement, experts in human trafficking, and other stakeholders to seek justice for victims and hold traffickers responsible for their actions. Carr and Allison Ausband both serve on the commission.

In 2019, Carr announced the creation of the state’s Human Trafficking Prosecution Unit at the Department of Law. The unit works with statewide partners to combat human traffickers and buyers.

Gov. Kemp and the First Lady have supported a number of pieces of successful legislation that support survivors of human trafficking and provide justice for traffickers.