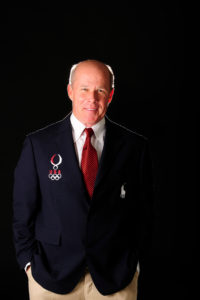 Jack Bauerle, the Tom Cousins Swimming and Diving Head Coach at UGA, has been nominated for a Golden Goggle National Coach of the Year Award by USA Swimming.

Eleven current and former athletes coached by Bauerle at Georgia were also named to the U.S. National Team.

Former UGA swimmer Chase Kalisz is also nominated for Male Athlete of the Year and Male Race of the Year for his 200-meter individual medley victory at the 2018 Pan Pacific Championships, where he swam the fastest time in the world this year. The race was just one part of his pair of IM sweeps in Tokyo and in Irvine at the Phillips 66 Nationals.

The award nominations are based on the year’s top accomplishments by U.S. swimmers, focusing primarily on August’s 2018 Pan Pacific Championships, where the U.S. team topped the medal count with 45 total.

The final Golden Goggle Award will rely on a percentage of the fan vote, which is open online through Nov. 9 at http://www.gado.gs/f.3.