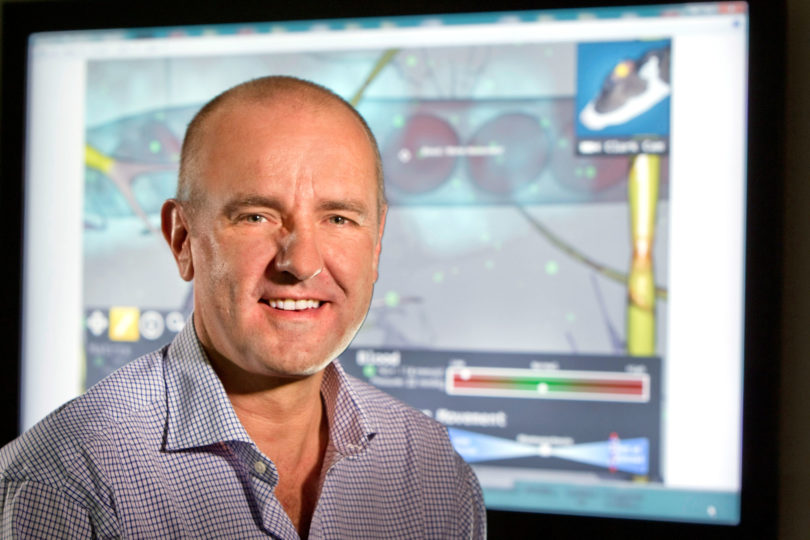 Video games aren’t to blame for childhood obesity. In fact, they can help, according to a group of UGA professors.

“If you can get to kids early and help them understand their physiology, the more they can appreciate the benefits of a healthy lifestyle,” said Tom Robertson, associate professor of physiology and pharmacology in the College of Veterinary Medicine.

Robertson, along with a host of other UGA professors who make up IS3D LLC, work to create educational games that teach children about healthy choices.

The latest game seeks to tackle obesity from the outset. “Bee Tees,” a play on the word “diabetes,” features a beehive that the player manages through inputs and outputs to keep the hive healthy. As the bees bring in food, the hive creates honey and grows larger. However, if the bees begin to bring in too much food, the hive will begin to decay.

The creators hope this will be a fun way to start the conversation with students about understanding and managing their bodies.

“If you tell 10-year-olds that if they don’t change their lifestyle habits, in 20 years they’ll have heart problems, their eyes will start to glaze over because it’s not relevant to them,” Robertson said. “Sue Tocher, the diabetes education coordinator at Children’s Healthcare of Atlanta, thought the game would be a great way to start a conversation with young children. Obesity is becoming a norm, so it’s harder to have that conversation and tackle obesity when children see older people who are obese.”

Robertson hopes the team can complete the prototype and begin testing it in schools around the state. Robertson’s work is part of UGA’s Obesity Initiative, launched earlier this year to tackle adult and childhood obesity in Georgia.

“You can’t tell kids to eat broccoli because it’s good for them. It’s like telling people to exercise so they won’t get fat versus somebody wanting to exercise because they are interested in it,” said Casey O’Donnell, a game developer and “Bee Tees” designer. “We approach all of our games that way. We ask: Can we make a game about diabetes that’s not about diabetes?”

O’Donnell began working with Robertson as an educational gaming expert in UGA’s Grady College of Journalism and Mass Communication. Now a telecommunications professor at Michigan State University, he continues to design games for IS3D.

“ ‘Bee Tees’ is unique because in most resource management games, the first thing a player does is mine all the resources and bring them in, but with the body, that’s a bad idea,” O’Donnell said. “If experienced gamers play it, they’ll probably mess up the beehive. But even if you do that, you can get the hive back to a healthy state.”

O’Donnell found that a beehive was a good symbol for the body. In the game, pollen and nectar mimic protein and sugar in humans.

“We don’t want kids to have an avatar and make themselves fat in a game, but it’s also close enough to a living organism to make sense as something that can get diabetes,” he said. “It’s all about striking a balance, and it doesn’t mean you can’t have a big hive. It’s finding the inputs and outputs to make it work.”

Thinking about future versions of the game, O’Donnell has considered other educational applications for the game, such as biology and ecosystem maintenance. He also hopes that students will want to maintain their hives and share them across social media platforms.

“Bee Tees” is in the prototype phase. UGA artificial intelligence graduate students are designing the physics of how the bees move and how players will be able to assign tasks to the bees.

Robertson applied for a national grant to fully develop the prototype for the game and field test it in Georgia schools and with patients at Children’s Healthcare of Atlanta, but he’s still looking for additional funding sources.

“We’re looking for partnerships with local and small businesses because software being developed at the university can only truly have an impact if moved into the community and made a commercially-viable entity,” he said. “We want to translate these innovations into something practical and useful for education in the real world.”