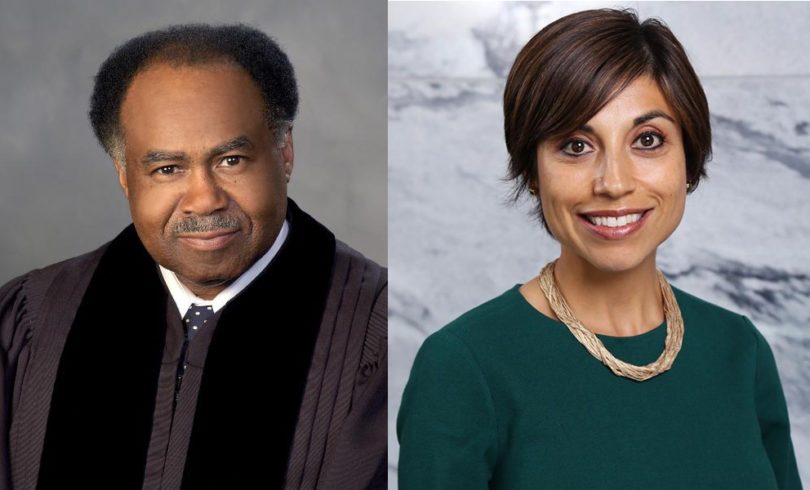 A new scholarship program is named for Robert Benham, left, who was a first-year law student 50 years ago and became the law school’s second African-American graduate in 1970. Mehrsa Baradaran, right, will serve as the school's new associate dean for strategic initiatives.

The University of Georgia School of Law has created a Benham Scholars Program, which will focus on helping to maintain and increase diversity in the legal profession. The program is named in honor of Georgia Supreme Court Justice Robert Benham, who was a first-year law student 50 years ago and became the law school’s second African-American graduate in 1970.

“Throughout our state and nation, there are young people who work hard and dream about success but have difficulty overcoming certain obstacles, financial or otherwise,” Benham said. “If this program can help even a fraction of them attend law school and have the chance for a successful legal career, we will have made an impact. I am of course honored by this incredible recognition and look forward to watching this new program change young lives.”

The Benham Scholars Program is funded as part of the New Approaches in Diversity and Inclusion initiative announced by UGA President Jere W. Morehead last semester. Private donations received from the Office of the President will be matched by private law school funding to support the program, which will focus on four key areas: recruitment, preparation for law school, academic support and career planning.

“One of our goals as an institution of legal education is to ensure our student body, and ultimately the new lawyers who enter the profession, is reflective of today’s society,” law school Dean Peter B. “Bo” Rutledge said. “We know that for some academically qualified students, barriers still exist to entering law school. Some of these are financial and others are tied to access to information and support. Through the Benham Scholars Program, we hope to give these young men and women the opportunity to thrive both in law school and in their careers.”

The first Benham Scholars will be admitted to the law school for the 2018-19 academic year.

In addition to the Benham Scholars Program, the law school has announced the appointment of a new associate dean for strategic initiatives—Mehrsa Baradaran, who will serve as the faculty liaison on diversity and inclusion issues. Baradaran recently achieved international notoriety for her books “How the Other Half Banks: Exclusion, Exploitation, and the Threat to Democracy” and “The Color of Money: Black Banks and the Racial Wealth Gap.”

“We are thrilled Mehrsa has agreed to assume these new responsibilities. Her background, experience and research afford her a unique perspective on our diversity and inclusion efforts as we strive to build upon the progress we have made in recent years,” Rutledge said.