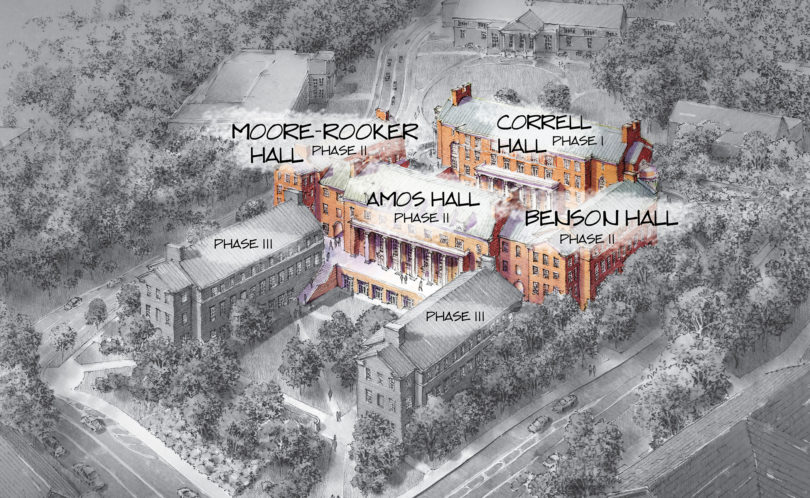 Two new UGA buildings have been named in honor of donors with lasting connections to the Terry College of Business—Benson Hall and Moore-Rooker Hall.

Athens, Ga. – Two new University of Georgia buildings have been named in honor of donors with lasting connections to the Terry College of Business.

Construction of Benson Hall and Moore-Rooker Hall is near completion as part of the second and largest phase of UGA’s Business Learning Community. The buildings are located on the Athens campus at the corner of Lumpkin and Baxter streets.

“I want to thank these outstanding alumni for their tremendous loyalty and support,” said President Jere W. Morehead. “Their generous gifts will enhance the learning environment for business students at the University of Georgia for generations to come.”

The two new buildings adjoin Amos Hall, the centerpiece of Phase II’s construction, and are next to Correll Hall, which opened in 2015.

“We are honored to name these buildings for such respected leaders in the business community. I am especially grateful for the faith and confidence these alumni have demonstrated in the future of the Terry College of Business,” said Dean Benjamin C. Ayers. “We’re very excited for completion of the second phase of construction this summer, when all of our faculty and students will be able to work, learn, study and collaborate in business school facilities that are second to none.”

The naming of Benson Hall and Moore-Rooker Hall was approved earlier this spring by the Board of Regents of the University System of Georgia.

Howard Benson, who passed away in 1971 at age 83, founded Benson’s Inc. in 1918. Today, Benson’s Inc. is the parent company to Benson’s Hospitality Group in Athens and Benson’s Bakery in Bogart.

Ed Benson is chairman emeritus of the parent company and graduated from UGA with a bachelor’s degree in business in 1942. He received the Terry College’s Distinguished Alumni Award in 1969 and is an emeritus trustee of the UGA Foundation.

Larry Benson is chairman and CEO of Benson’s Inc. and also graduated from UGA in 1974 with a bachelor’s degree in management. In addition to his support of the business school, he established the Benson White Coat Support Fund for the university’s Medical Partnership with Augusta University.

A 1957 graduate of the business school, Moore has served in a number of alumni leadership roles. He was elected the founding chairman of the Terry College’s Board of Overseers in 2001. He is a past chairman of the UGA Foundation Board of Trustees, a former trustee of the UGA Real Estate Foundation and an emeritus trustee of the UGA Athletic Association Board of Directors. He established the Dudley L. Moore Jr. Chair of Insurance with an endowment in 1986.

Moore’s father-in-law, Richard Bowden, is a graduate of UGA, and his wife, Peggy, earned bachelor’s and master’s degrees from UGA’s College of Education. Three of the Moores’ children also graduated from UGA.

Moore was the founder, chairman and CEO of Atlanta-based Omni Insurance Group Inc., a specialty insurer that was acquired by Hartford Financial Services in 1997. He received the college’s Distinguished Alumni Award in 1985 and was named Risk Management and Insurance Alumnus of the Year in 1992.

Three generations of Rooker family members have graduated from the Terry College of Business. John W. “Jack” Rooker was the second of three sons of William A. Rooker Sr. to graduate from UGA-all in business. After his graduation in 1960, Jack Rooker joined his father’s Southern Bonded Warehouse company. Only a couple years prior, Rooker Sr. had added a real estate and investment company to the family’s business.

Today, the Rooker Co. has evolved into a highly successful real estate development business that designs and builds warehouses, large distribution centers, manufacturing and government facilities predominantly in the Southeast. Jack Rooker is the company’s chairman, and his son, John, a 2002 Terry College graduate, became CEO in 2011.

Jack Rooker’s previous gifts to the university have supported not only the business school but also the UGA Real Estate Foundation, where he served as founding chairman for five years, the Athletic Association’s golf facility and equestrian team center, and the Rooker Family Equine Receiving Barn at the veterinary medicine hospital. In 2005, one of the four residence halls in the university’s East Campus Village was named John W. Rooker Hall in gratitude for his years of alumni leadership and support.

Amos Hall, which connects Benson Hall and Moore-Rooker Hall, will be the Business Learning Community’s hub when all three phases of construction are complete. It is named in honor of Daniel P. Amos, chairman and CEO of Columbus-based Aflac.

As the “Building Terry” campaign chair, Amos held the top leadership role in the business school’s campaign, which exceeded its original fundraising goal of $90 million by more than $30 million when the campaign ended in 2015. Amos Hall was the first of the three buildings that comprise Phase II to be named.

Amos joined Aflac after graduating from UGA in 1973. He has been Aflac’s chief executive since 1990 and chairman since 2001. Aflac is a Fortune 500 company that insures more than 50 million people worldwide. It is the leading provider of individual insurance policies offered at the worksite in the U.S.

Amos was awarded the Salute to Greatness Award from the Dr. Martin Luther King Jr. Center in Atlanta in 2013 and the Terry College’s Distinguished Alumni Award in 1990. He is a past chairman of the UGA Foundation Board of Trustees and previously endowed the Amos Distinguished Professor of Insurance at the college.

The university broke ground on Phase II in 2015 at the same time that Correll Hall was dedicated. Supported by $35 million in private funds, Correll Hall was the first building of the Business Learning Community to open. It is named for A.D. “Pete” Correll, chairman emeritus of Georgia-Pacific and a Terry College alumnus, and his wife, Ada Lee Correll, a graduate of the UGA College of Education.

With construction scheduled for completion in May, faculty and staff from all seven of the college’s academic departments, as well as other Terry College program staff, will move into the Phase II buildings in June.

A dedication of Amos Hall, Benson Hall and Moore-Rooker Hall is set for Sept. 15, with a groundbreaking ceremony for Phase III construction to follow on the same day.