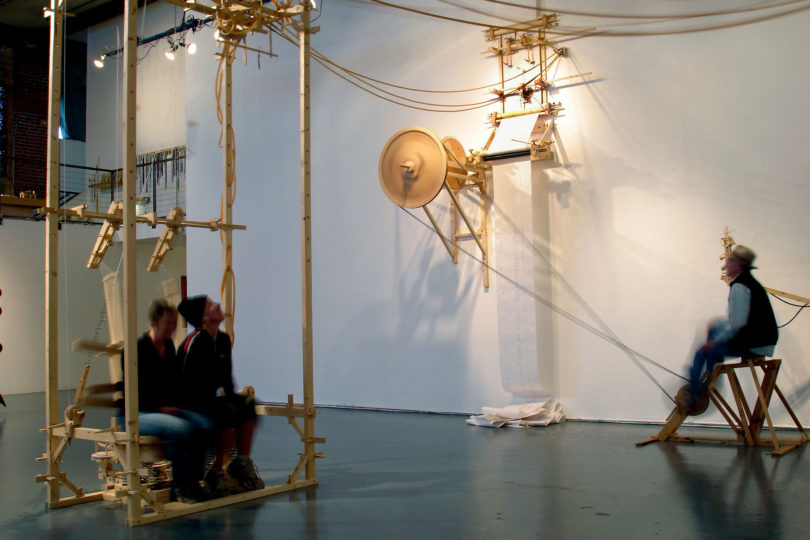 For Bernie Lubell's "Conversation of Intimacy

Athens, Ga. – The University of Georgia Lamar Dodd School of Art will present a lecture by installation artist Bernie Lubell on March 19 at 5:30 p.m. in Room S151 of the school of art. The lecture, part of the Visiting Artist and Scholar Lecture Series, is free and open to the public.

A San Francisco-based artist and set designer, Lubell’s interactive wood machines include a Stone Age computer, a rainstorm of chaos and nostalgia, a room-sized simulation of the human heart and a giant cooperative knitting machine.

His UGA lecture on “The Etiology of Innocence,” which will begin with a detailed discussion of his room-sized heart simulation, is a tour of 13 of his interactive wood machines. In discussing their origins, implications and construction, Lubell will draw on the 19th century physiologies of Etienne Jules Marey and evolutionary theory, question the nature of time, explore the palpable contributions of touch and the importance of accidents and failure. Quantum entanglement, language, navigation, magic and the Marx brothers also figure in the exposition.

In addition to his lecture, he will meet with graduate students from various studios in the school of art and lead a workshop on failure, during which the students will build and present what Lubell describes as a “machine that fails at love.”

“We wanted to bring Bernie to campus because he is a true interdisciplinary thinker and because of the comedic depth of his work,” said Adriane Colburn, an assistant professor of art. “He is a mad scientist, engineer, performer, craftsman, poet and artist all wrapped up into one.”

His installations have been shown internationally since the early 1980s and are significantly dependent on audience participation. For example, in Lubell’s 2010 installation “Conversation of Intimacy” in the San Jose Institute for Contemporary Art, visitors could crank, rock and create sounds with the work and thereby access what the artist described as “the vast reservoir of knowledge stored in each of our bodies” and become active participants in the execution of the work.

Lubell holds a master’s degree in social psychology alongside his studies in physics and art. He has been awarded a Guggenheim Fellowship, a Gottlieb Foundation grant and an award of Distinction for Interactive Art from Ars Electronica.

For more information on the UGA school of art, see http://art.uga.edu/.