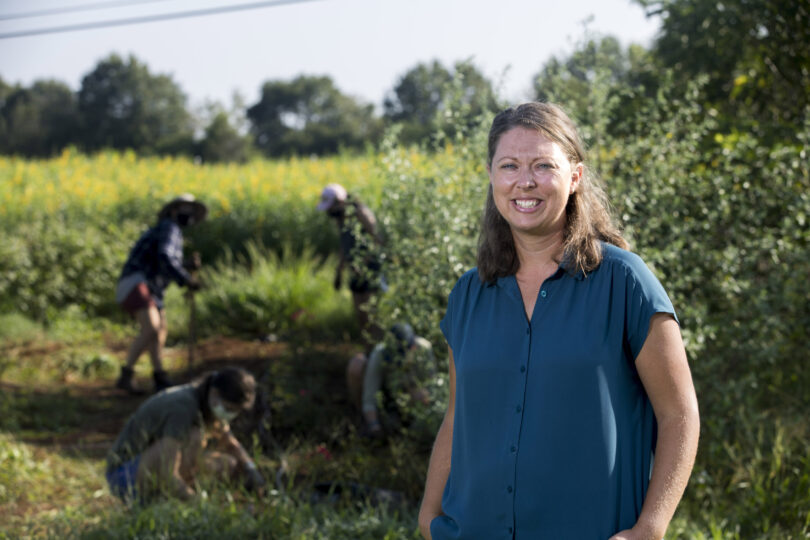 JoHannah Biang's official position is agriculture technician but she describes her job as “the UGArden farm manager.” (Dorothy Kozlowski/UGA)

JoHannah Biang has been working with plants since high school, and her love of horticulture continues to grow, years later.

Biang, whose official position is agriculture technician, lightheartedly describes her job as “the UGArden farm manager.” She’s in charge of about 8 acres at UGArden, a student community farm, and that entails all the planning—from when the crops need to be planted to what kind of fertilizer they need—as well as the supervision of staff, including student workers.

During Biang’s senior year of high school, she began to take an interest in plants and took a job at a garden center. There, she worked 30 hours a week while finishing the school year. She credits this experience as a catalyst for her impressive career in horticulture.

Biang was home-schooled from kindergarten to her senior year of high school. After that, she completed her core classes at Gordon State College in Barnesville before transferring to the University of Georgia.

Once she finished her bachelor’s degree in horticulture, Biang decided to take a year off from school and continued to work at the UGA Horticulture Trial Gardens on campus.

“I worked really closely with the staff there, trying to figure out which direction I wanted to go, because horticulture is a pretty wide program. There’s so many things you can do—you can be a grower, you can do breeding, you can do research, you can work on public gardens like the Botanical Garden.”

At this point, Biang said she had no real intention of going back to school. But while she was working there, the Trial Gardens received a new type of seed for patio vegetables—veggies bred to be smaller, so they can grow in containers—and Biang fell in love with vegetables all over again.

“I was like, ‘Oh, yeah, I really actually love vegetables.’ I’d forgotten … I didn’t really think of vegetables as a career,” Biang said. “I loved plants, but I wanted to be on the ground with the plants, and I really didn’t want to be in a giant tractor with fields of one kind of crop.”

One of Biang’s professors from her undergraduate studies suggested she look into earning a graduate degree, which prompted her to work toward a master’s in horticulture. Her focus was on small-scale gardening such as community gardens and in urban environments, and her research specifically focused on developing green walls, vertical systems that allows plants to grow on a wall. Now, she’s in her third year of earning her Ph.D. in the crop and soil sciences department.

“It’s crazy. Every year, I ask myself, ‘Why? Whose idea was this?’” Biang joked. “It’s been really humbling I think, but also, it’s fun to talk to the students because they ask me how my classes are going, and it’s really funny.”

Even though it’s certainly difficult, Biang said pursuing her Ph.D. is so worth it. She credits her support system at UGArden and her great supervisor for motivating her to keep going.

The 10th anniversary of UGArden was this past May. Instead of hosting a large party and fundraiser and inviting past interns to come back, like Biang had envisioned, she was without any student workers and doing the bare minimum needed just to keep the farm functioning.

The COVID-19 pandemic drastically changed what life on the farm looked like for Biang and the UGArden team. Although UGArden always works with the Campus Kitchen at UGA, a student-run hunger relief program, Biang said the two organizations teamed up even stronger this past March. This resulted in her doing the essential, bare bones farm work so UGArden could continue to supply Campus Kitchen with produce.

“Everything took longer because we didn’t have as many people—the harvesting, the mowing, the weeding,” Biang said. “Instead of focusing on making the whole farm look pretty and doing all the farm work, we just did the essential farm work just to get crops growing and be able to continue supplying Campus Kitchen with their produce.”

In order for Campus Kitchen and UGArden to continue to make safe deliveries to local homebound seniors—one of the most vulnerable populations to COVID-19—UGArden had to make its own safety protocols. Biang said they do a lot of sanitation every day, have signage about protocol, practice social distancing, and wear gloves and masks, even in the field.

Biang said if students are interested in horticulture but not sold on it, they should find somewhere like UGArden where they can volunteer, work or take a class to get hands-on experience.

She said horticulture isn’t really something that students “get into” just because they read about it. Usually, they’re inspired by an experience, whether it’s with a parent or grandparent, that connects them to plants.

“Once you have that experience, what’s not to love?” Biang said. “A willingness to learn, just a genuine interest—that’s all it takes. We’re prepared to teach anyone anything they need to know. That’s what I really love about this place.”

Biang’s favorite part of her job is seeing students grow. Biang said UGArden often sees many women who aren’t confident that they can meet all the physical requirements of the job.

“A lot of them actually don’t think they can do these things, like run a tractor or run a big tiller,” Biang said. “When they’re in the internship and I teach them how to do all those things, their faces are different. You can see confidence and just this idea of self-empowerment … they’re proud.”

This “transformational moment” when students pivot and go from not feeling confident to knowing all the ins and outs of the job is what Biang thinks about when the going gets tough.

Although it was difficult, this summer during the pandemic did have a positive impact on Biang, at least in one area.

Biang said that even though UGArden has always partnered with Campus Kitchen, she didn’t always get to see the end result of her work. However, due to the lack of people doing meal deliveries, Biang tagged along to deliver meals to some of the seniors.

“That really stuck with me, just seeing how appreciative they were and how helpful it really was for them to get that produce and those meals that Campus Kitchen prepares with our produce,” Biang said. “Just being able to see that, hey, the produce that we grow does actually make a difference in this community, that really does help on those tough days.”

When she’s not working in the fields or studying for her Ph.D., Biang said she spends as much time outdoors as she can, especially with her family in Georgia and Florida. Fishing, bird watching, hiking and going on walks with her dog, Rowdy, are all viable choices.

“Lately, I’ve been loving to go to Lake Herrick. That’s like my thing that I just enjoy after a stressful day or a crazy class,” Biang said. “This year, I’ve definitely taken every opportunity just to take a break and chill and let my mind be quiet and reset.”